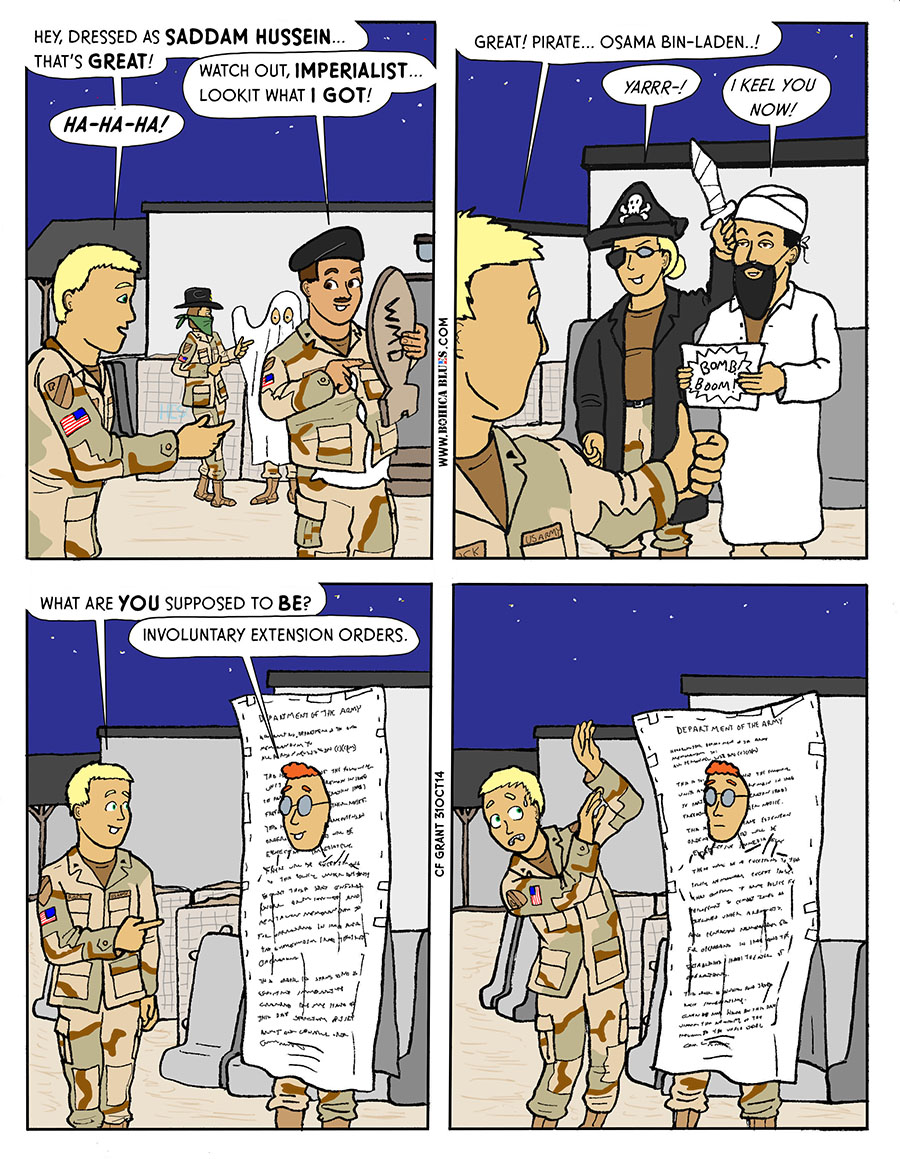 31 OCT:
We had a Halloween, sorta. People dressed in clever makeshift costumes, or had family send plastic masks from home. A few enterprising souls went trick-or-treating to different trailers. It was kinda cool but also kinda sad, reminding us of how far we were from the things we really wanted.

Of course, to scare people in Iraq, you have to find what really scares them: the Involuntary Extension Order.

We all lived in fear of the Involuntary Extension. There were many names for it depending on circumstance– one of the most common terms was “stop-loss”. Stop-Loss was the military’s way of saying that, hey, yeah, we know you signed a contract for 4 years in the Army, and technically your 4 year term is over about halfway through your scheduled deployment, so… we’re just going to keep you that extra few months so you can finish out your deployment. In other words, your expected “loss” from the Army has been “stopped” until everyone comes home together. After being released from the deployment, then you are free to go.

Then there were generic Involuntary Extension orders. They could come individually, or for a whole unit. Typically it meant that somewhere a General or someone decided that what you’re doing in Iraq is so valuable and instrumental that they just can’t afford to let you go home on your regularly scheduled time. That is regardless of whether you were due to process out of the military or still had years left to serve on your contract– you stayed on your deployment until the Powers-That-Be decide you can rotate out.

Some people actually liked stop-loss and involuntary extension. People who were kept past their original end-of-enlistment contracts were usually paid decent monthly bonuses for their trouble, and of course when deployed to an overseas combat zone you get “danger pay” and aren’t taxed– it’s a sweet deal, financially speaking, so long as you don’t mind being away from friends and family. Plus, there’s that whole “getting shot at” thing, but… hey, details, details.

The typical rotation in the Army was one year in the combat zone. This was similar to how things were done in Vietnam– 1 year and out. This lead some people to feel that we rotated people out of Vietnam just as they were becoming really good at what they were doing, and the end result was that Vietnam wasn’t a war we fought for 10 years, but a 1-year war we fought 10 times. When I was in Iraq, I took an informal survey of my unit (I randomly asked a bunch of people, basically) about staying longer. I asked if they’d be willing to do another year in Iraq, if it was guaranteed they’d never have to rotate back again: they’d be taken off the potential rotation list permanently. Most of them said “yes”, they’d take that deal. Any national leaders reading this, think about it. Or maybe just not jump into every war to start with?

Have a fun Halloween!