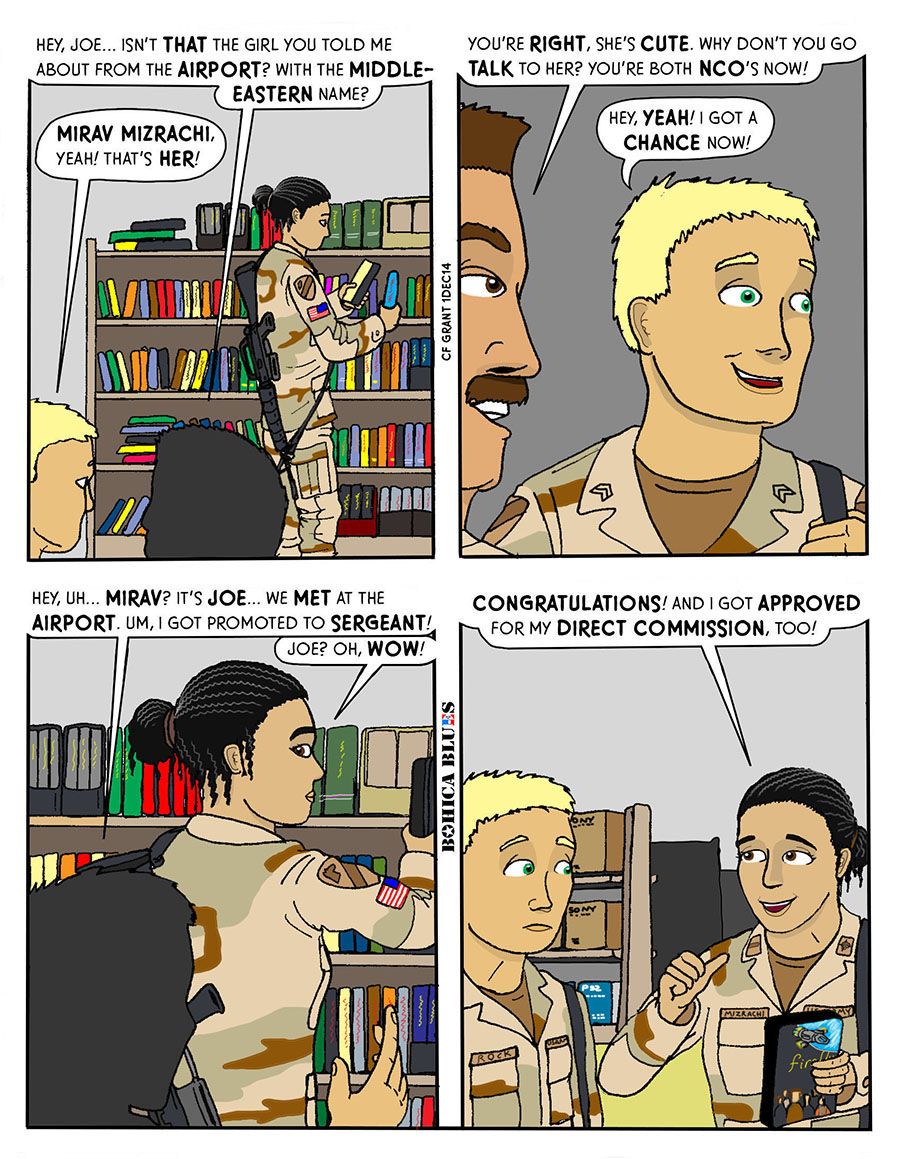 1 DEC:
The more things change, the more they stay the same. In this case, Mirav Mizrachi remains out of reach even for the newly-promoted Sergeant Joe Rock, because she has gotten a direct commission to be an officer.

There are many different paths to becoming an officer. Probably the most common one is to go through ROTC (Reserve Officers Training Corps) in college or university. You attend military classes as you are enrolled in regular degree-seeking education. Upon graduation, you are commissioned as an officer in the military or Coast Guard (Coast Guard being Department of Homeland Security, not Department of Defense, because they serve a “police” mission).

Another way is to go through an Officer Academy: West Point for the Army, Annapolis for the Navy, or the Air Force Academy in Colorado Springs. Other academies are held in similar esteem and it is possible to receive a commission at other 4-year military colleges.

And then there’s Direct Commission, where someone with enough experience can apply for, and get approved for, direct commission to become an officer. There may be certain schools one has to attend prior to, or within a period of time after, the commissioning, but it allows a person to essentially just ask to become an officer based on their qualifications. It can be done relatively easily if someone wants to become an officer in a job that has a critical shortage of officers, or it can be hard if someone wants to be an officer in a branch that doesn’t really need a lot of officers. The criteria change a lot, though, especially if a lot of people leave the Army to pursue other careers and a once-full job starts becoming a shortage.

In this case, Mirav Mizrachi, who we met as a Staff Sergeant, has applied for a Direct Commission and gotten approval for it. She now starts as a Second Lieutenant, the lowest of the US Army officer ranks. Her branch is Military Intelligence, and eventually we will learn how she qualified for her position. But regardless, being promoted to officer once again means that it would be against the regulations for Joe to ask her out, since once again she is across the “rank barrier” (Enlisted, NCOs, Junior Officers and Senior/Flag Officers).

As for “which career path is best” for becoming an officer, each have relative strengths and weaknesses. Attending a 4-year academy allows you to become thoroughly immersed in lessons on leadership and officer culture. On the other hand, it can also make it hard to relate to subordinates, most of whom will not have any experience with that “full immersion” culture. ROTC allows for a long period of in-depth study as well, but officer training is conducted concurrent with a very “civilian” lifestyle that may make a graduate feel a bit too comfortable mixing with future subordinates as a “buddy”. Direct commission candidates frequently have a lot of experience as NCOs, which makes them good leaders, but they may have a hard time “letting go” and letting future NCOs under their command do their jobs. Of course, not everyone falls into these pitfalls, and it is possible to excel if one is able to maintain a good sense of self-awareness.