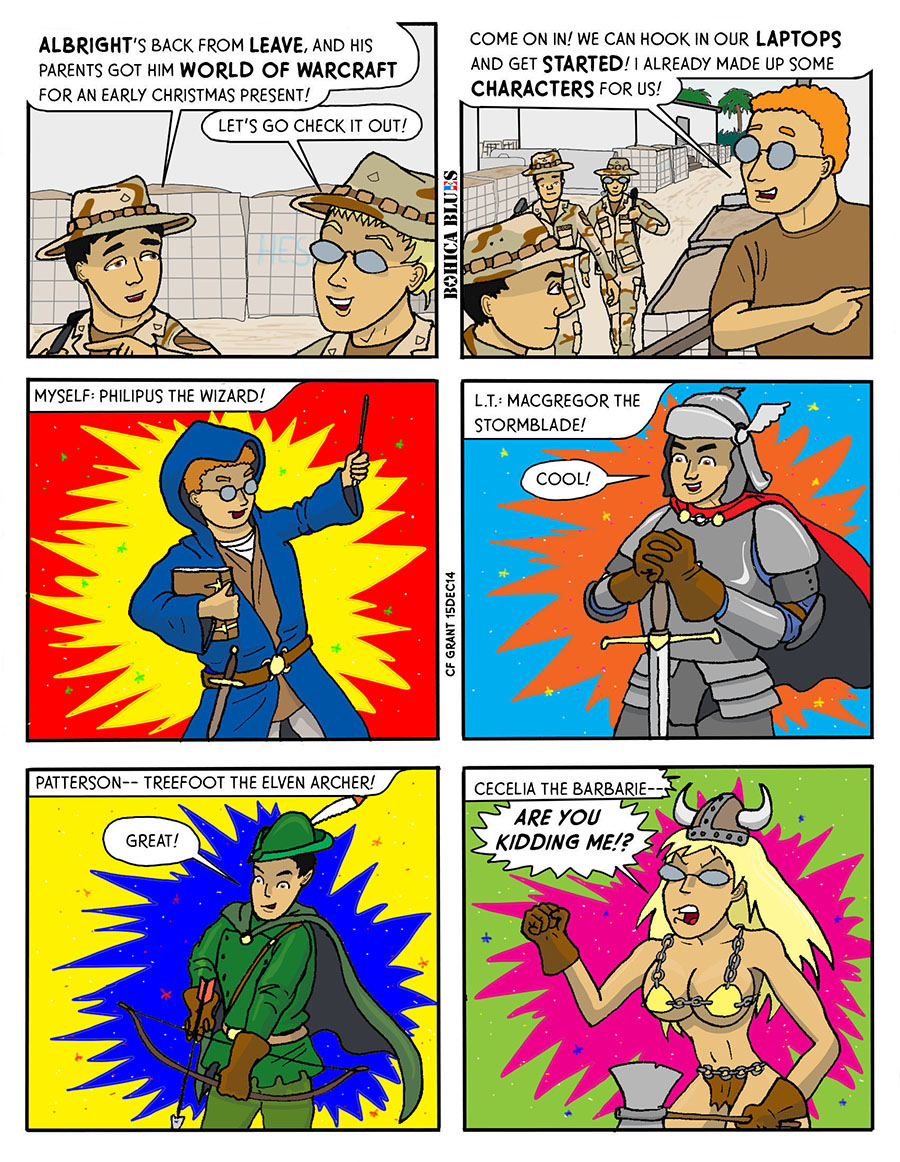 15 DEC:
“No, seriously, your armor is your dexterity!”

I never played World of Warcraft online or Everquest, but I know how popular these (and other online games) have been. I used to be a pretty regular player of Dungeons & Dragons, though, and it is always the same– the female characters get the skintight leather outfits, or the chainmail bikini, and other silly gear while the guys lumbered around in big clunky armor, covered head to toe. Poor Cecelia Glass– she’ll be sure to create her own character next time. Maybe she’ll make a big, mean half-Orc barbarian and use the guys to carry her gear. Especially the Elf, whom she’d probably break over a knee…

OK, let me reassure you– a lot of webcomics out there today are about people playing video games. BOHICA Blues will not become one of them; however, I have to admit playing video games was a big activity during down time. It should be evident by now in this comic that being deployed to a war zone is not all constant, heart-thumping non-stop action. For most people, there is a lot of waiting around and down time, and I think our leadership was actually glad to have us immerse ourselves in video games instead of going out and creating mischief out of boredom. I’ve mentioned previously that veterans of past wars have said that war is “90% boredom; 10% sheer terror” and I have to say that ratio sounds about right: in the 12 months I was in Iraq, I had about 4 months of “action” (even most of that was riding around, waiting for contacts that never materialized, but still keeping us on edge) and the other 8 months were, you guessed it, video games, reading, going to the gym, and so on.

Really I think the hardest thing is just the constant stress hanging over us. Even at “safe” bases we might get the occasional rocket, mortar, or suicide bomb attack. That concern was constant and never-ending, that “waiting for something” feeling that dragged on and on. So it is no surprise to me that video games offered such a relief– the chance to go into a fantasy world for a few hours and if things go badly, you can respawn.

So I’ll focus on video games for a bit, and may come back to them in the future.