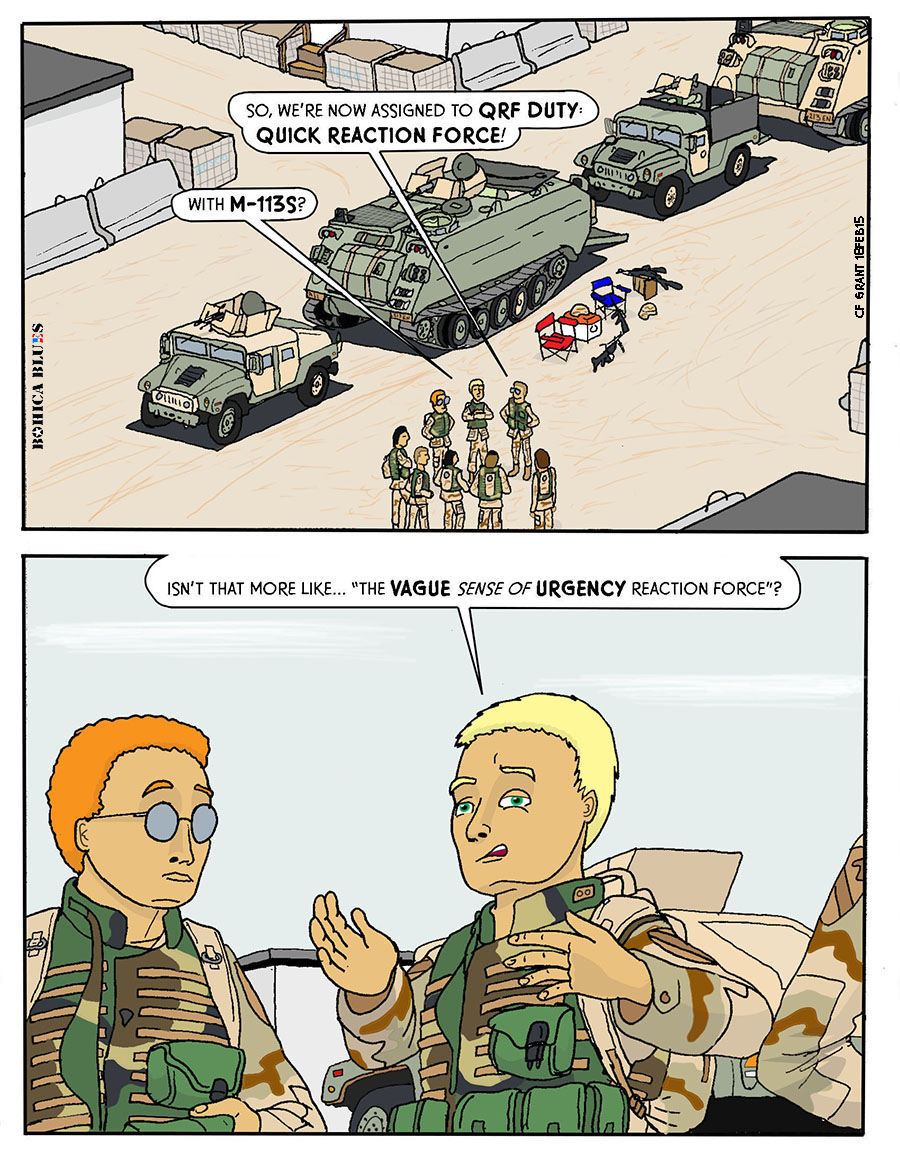 18 FEB
QRF: “Quick Reaction Force”– ready to go in time of need; they wait the call to spring into action… or, if they are equipped with the old M-113 “Track”, they kind of… mosey on over to the trouble zone to lend a hand.

The M-113 was invented in the late 1950’s and finally manufactured and deployed in the early 1960’s. By 1962, they were sent to Vietnam. They’ve served for decades and I admit they served well. They’re actually fairly rugged and simple vehicles; not too complex and not too demanding.

In the 1980’s the US Army fielded the M1 Abrams battle tank, with a turbine engine, and it easily outran the little M-113. Of course, it’s hard to send an army into combat when your infantry can’t keep up with your tanks– obviously you want everyone to get there at the same time. So the M2 Bradley was invented to compliment the M1 Abrams tank, and the old M-113 started to be put to the sidelines.

“Put to the sidelines” means sent to the Reserves and National Guard, so that those forces arrive late instead. The problem is, Bradleys (and later, the Stryker) are expensive, so every year there’s a debate over the budget (in other words, every year) there’s just not enough money to equip all the Reserve and Guard forces with the latest and greatest gear (although some Guard units are lucky enough to get top of the line stuff fairly early). Now, the 213th Battalion is put on QRF duty with the older M-113 “Tracks” (they never got an “official” duty name) to do they best they can.

Is the M-113 a bad vehicle? Not really, it was an excellent vehicle for its time. They could still be some life left in the design, too– it’s nicely compact, being smaller than both the Bradley and the Stryker, and with some tinkering and redesign a version of it could probably be quite useful for years to come. But it just wouldn’t be cost-effective to radically redesign the old Tracks and keep them in service, and keep their replacement parts made, just to get another 10 years or so out of them. I’m fond of them because I’ve used them for so long and I have the comfort of familiarity, but the day of the M-113 is over.