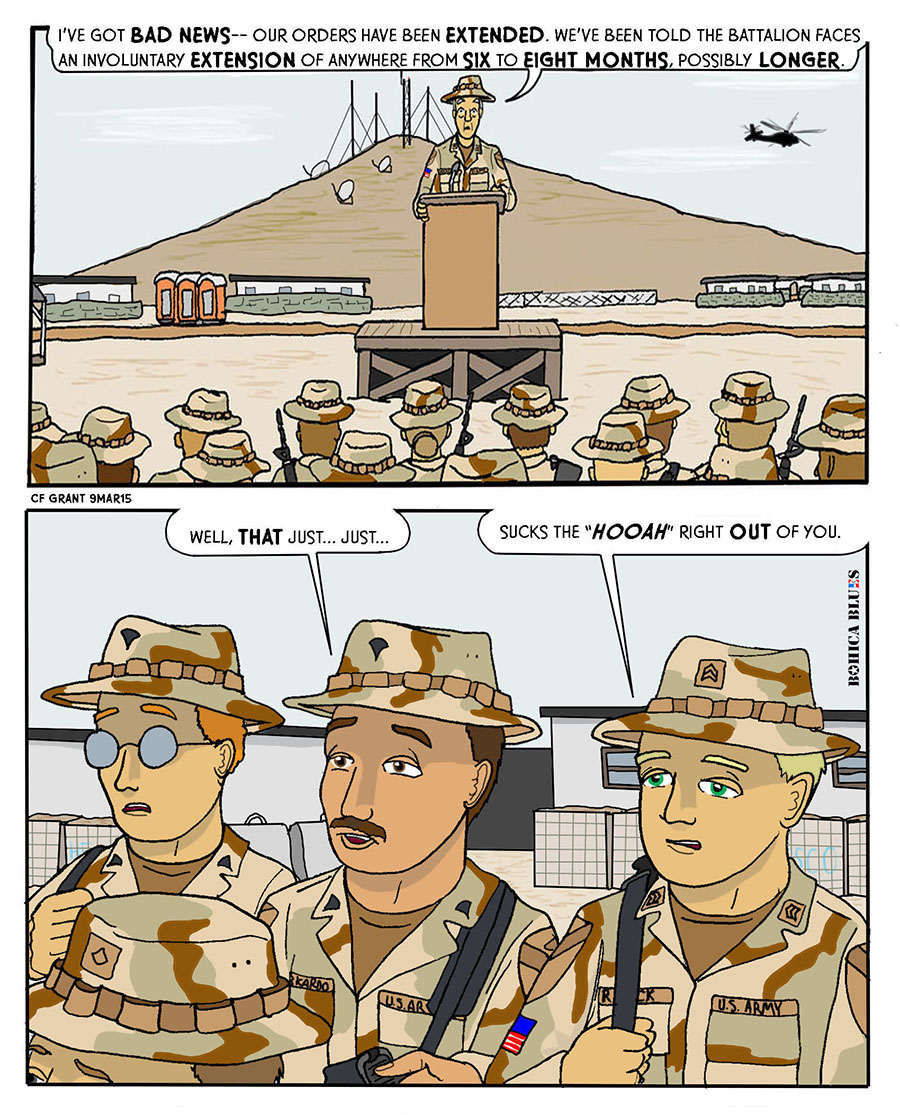 9 MARCH:
“The light at the end of the tunnel is the headlamp of an oncoming train.”

While in reality I did not get extended orders, the thought that it might happen to any of us loomed over our waking thoughts as we got closer and closer to rotating out. There were units near our location that did get extended, and of course when we got to Iraq a year earlier, the 1st Armored Division did, in fact, get called back from Kuawit to return to Iraq and deal with some of the outbreaks of violence that happened during our mass “changing of the guard”. Some smaller units got extended and sometimes individuals got extended.

As we prepared to rotate out, rumors flew and patience wore thin. Would they or wouldn’t they? And if they were going to extend our orders, will they just hurry up and announce it so we could deal with it? That kind of stress, on top of everything else we’d gone through, was painful to endure. That and having to tell family back home that we just didn’t know, had nothing to tell them one way or another, even though they would hear the same rumors.

While in the real world I didn’t get extended (actually, by this time 10 years ago, I was already safely home), I decided to extend the characters for awhile longer. I still have a lot of Iraq material to work with, especially since I have not re-used everything I had before, and by putting BOHICA Blues into a running story (instead of just a “joke-a-day”) I have created a lot of totally original materiel to link stories and character arcs together. So there’s lots of stuff left to work with.

It is also evident why I wanted to introduce the concept of the word “Hooah” earlier. This joke means nothing if you haven’t been familiarized with “Hooah”, and having Joe say “sucks the motivation right out of you” doesn’t have the same, well, “Hooah”. While I was in Iraq I met some guys who said they had coined the phrase and wanted to trademark it as a catchphrase and sell t-shirts with it, or something– maybe do a comic strip of their own. I never heard how their venture went, but hopefully they’ll hear of this strip and stop by to say hello.

Eventually I’ll bring the 213th home, and continue with some ideas I have for dealing with returning veterans and some of the issues faced by them. There’ll be some “returning to civilian life” stories but there will also be some stories about life in the Reserves, balancing one weekend a month drills with family, friends, school and jobs. But for now, let’s use some more of this Iraq material.