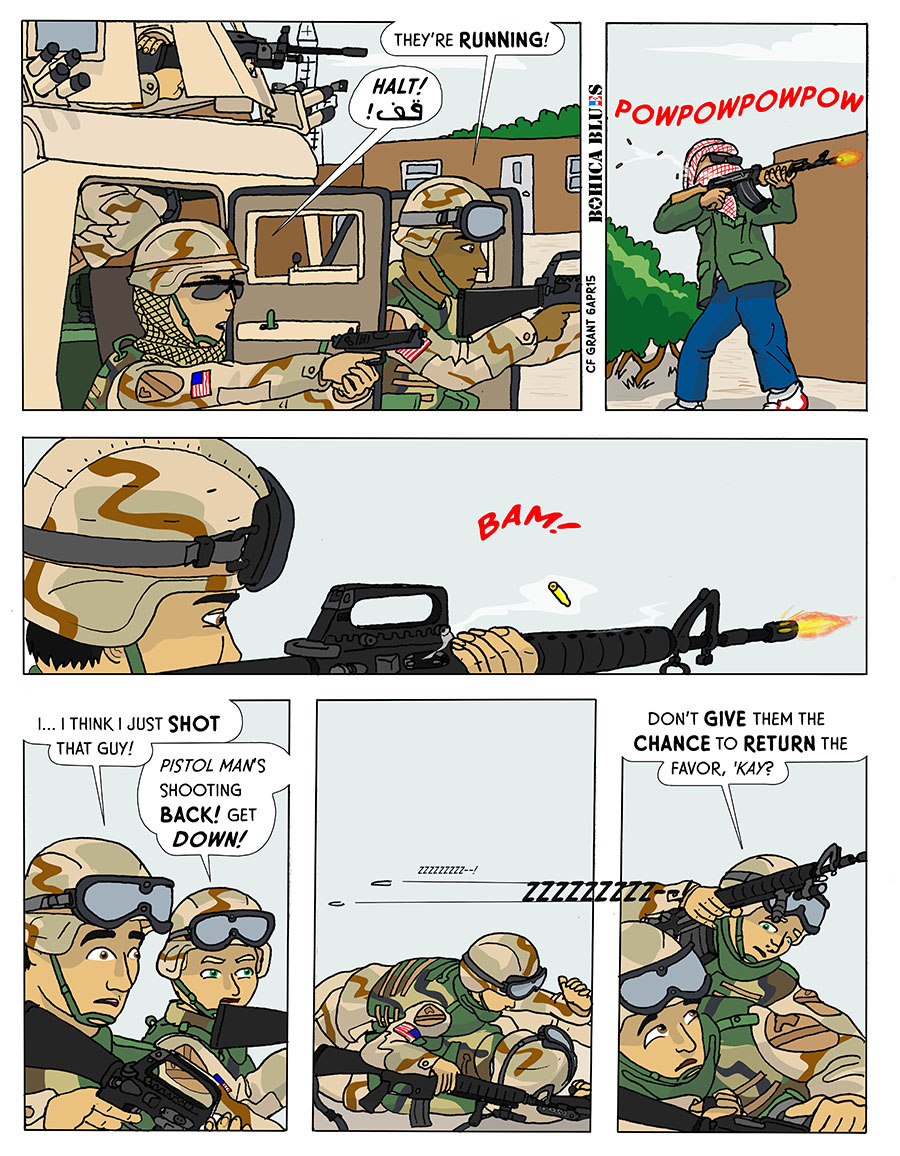 6 APRIL:
A lot happening here. Oddly enough, if the two Al-Qaeda in Iraq militants had just run away immediately, they’d probably have been okay. But they had this notion that they had to do covering fire and bounding back as a team… this is when it’s possible for someone to have too much “technically proper” knowledge and not enough experience and judgment to know when to do the simplest thing.

When I got to Iraq, the “organized” resistance (the Iraqi Army) was smashed and disbanded, and the “disorganized” resistance (bands of militants, mercenaries, and ideologues) was still just forming. A lot of amateurs were still in play. By 2005 they were getting their acts together and we were seeing much more professional resistance, especially in the form of foreign fighters coming in for Al-Qaeda and locals representing Shi’a groups. I’ve mentioned the Badr Brigades and the Mahdi Militia before– Iraq has a lot of Shi’a, and they were under the domination of Sunni tribes led by Saddam Hussein. The Shi’a were used to organizing on the sly and so they were the first to have decently-led and equipped forces to challenge us. The Sunnis were slower to react, since they had been in power and had no need to think like an underground militia group.

The arrival of foreign (pro-Sunni) Al-Qaeda groups changed that. It was an interesting bowl of stew because the foreign fighters brought weapons, organization, training, and outside money, but they were also foreigners, strangers who didn’t necessarily care about Iraq. As far as many native Sunni Iraqis were concerned, these guys were little different from the Allied forces: using their homes as a battleground for competing, outside ideologies.

So, here we have 1st Platoon roll up on this interesting scene– foreign AQI guys trying to pressure Hakim into becoming more integrated to their cause. Lieutenant Mizrachi tries to get them to surrender, since she thinks like an Intel officer, and she wants their information. Who knew these knuckleheads would actually try to fight their way out? So Patterson kills one and it has a profound affect on him. You never know how you’re going to react until you’re in the situation– fortunately, Joe is there to see to it he’ll live to contemplate it another day.