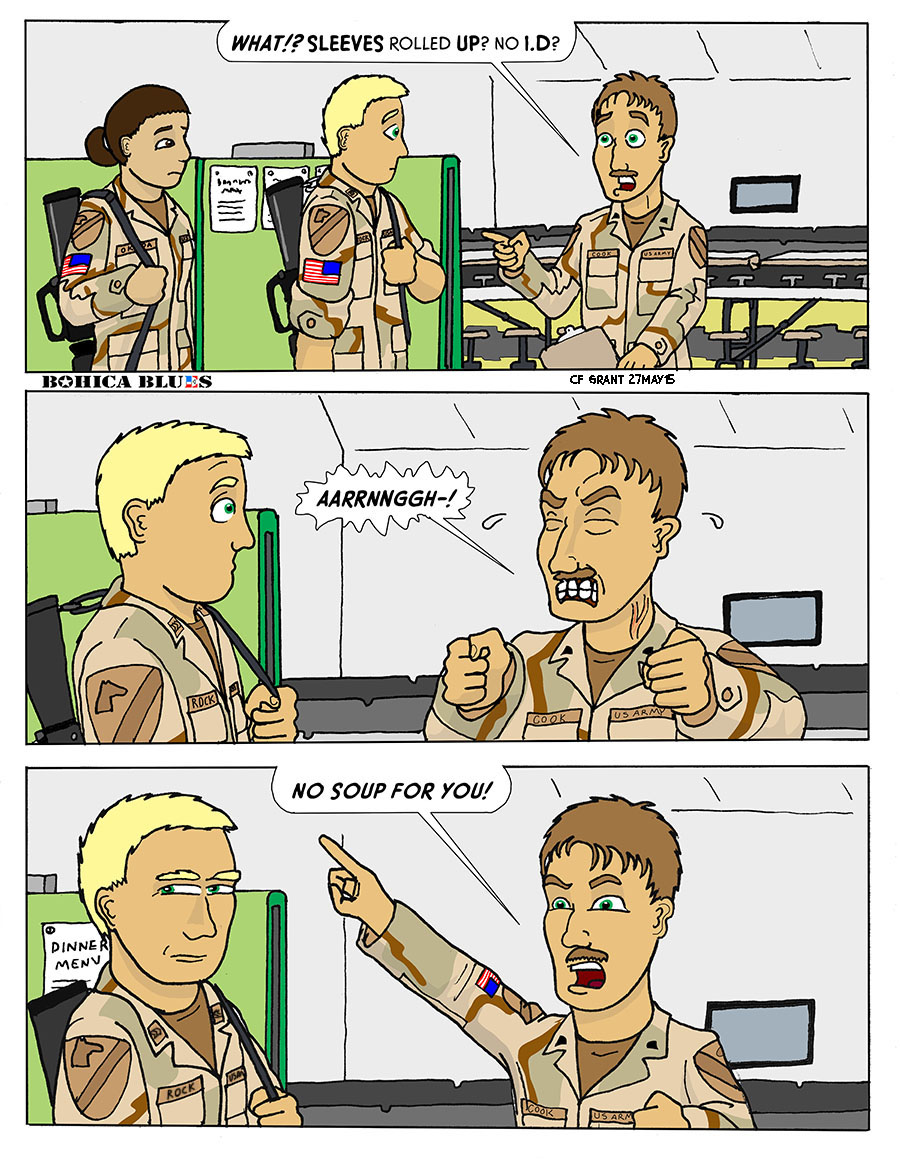 A lot of character interaction takes place in the Chow Halls, and that’s because it is one time when everyone from a unit, regardless of job, got to sit with their comrades and cross-level all the information they’d learned from the day thus far. It was an important social event and a chance to talk with little likelihood of being interrupted by pesky realities like Sergeants-Major or incoming enemy fire.

As mentioned previously, the cooks were taken halfway around the world and then their one reason for existence taken away by KBR contractors. They were put in charge of menial tasks, so when given the opportunity to enforce mess-hall rules, they took to it with vigor. There were some pretty crazy rules about going into the chow halls, such as no PT uniforms (covered previously) and also no rolled-up sleeves (one of the great things about the Woodland and Desert camouflage BDUs/DCUs* was that we could roll up our sleeves in hot weather. That’s been taken away from us in the digital monstrosity that replaced them). You also had to show your identification card at the front desk head-count, because that was sure to stop terrorists in their tracks, right? “Oh, by Allah, I have taken the trouble to steal this soldier’s uniform, helmet, armor, weapon, and blend in with his comrades but the lack of an ID card will surely deny me my trip to Paradise and 72 virgins!” You bet.

So the cooks were more than happy to vent their frustrations on the regular Joes and Janes. I can’t be too hard on them, because the cooks were good enough to me to let me post “BOHICA Blues” in the mess hall every day… and they had a crappy job, to be honest. Almost like the infamous “soup Nazi” of Seinfeld fame.

In regular service, cooks are never truly appreciated and they usually bear the brunt of jokes (or even hostility) for food of questionable quality. But they can only work with what they got, and what they got was supplied by the lowest bidder and designed for cheap, quick, mass consumption. That makes for limited options produced on industrial scale– that leaves little room for real cooking skill and flourishes.  The one time relatively decent food was given to troops was during deployment, and they weren’t allowed a hand in that. It has to be frustrating and a bit insulting.

Still, I’d say this– if you find yourself in a crappy job and unappreciated by the people that put you in that crappy position, don’t take it out on the regular people who are your fellow sufferers.

*DCU: Desert Camouflage Uniform, the official name for the Desert version of the same uniform.