You Didn’t Get the Memo 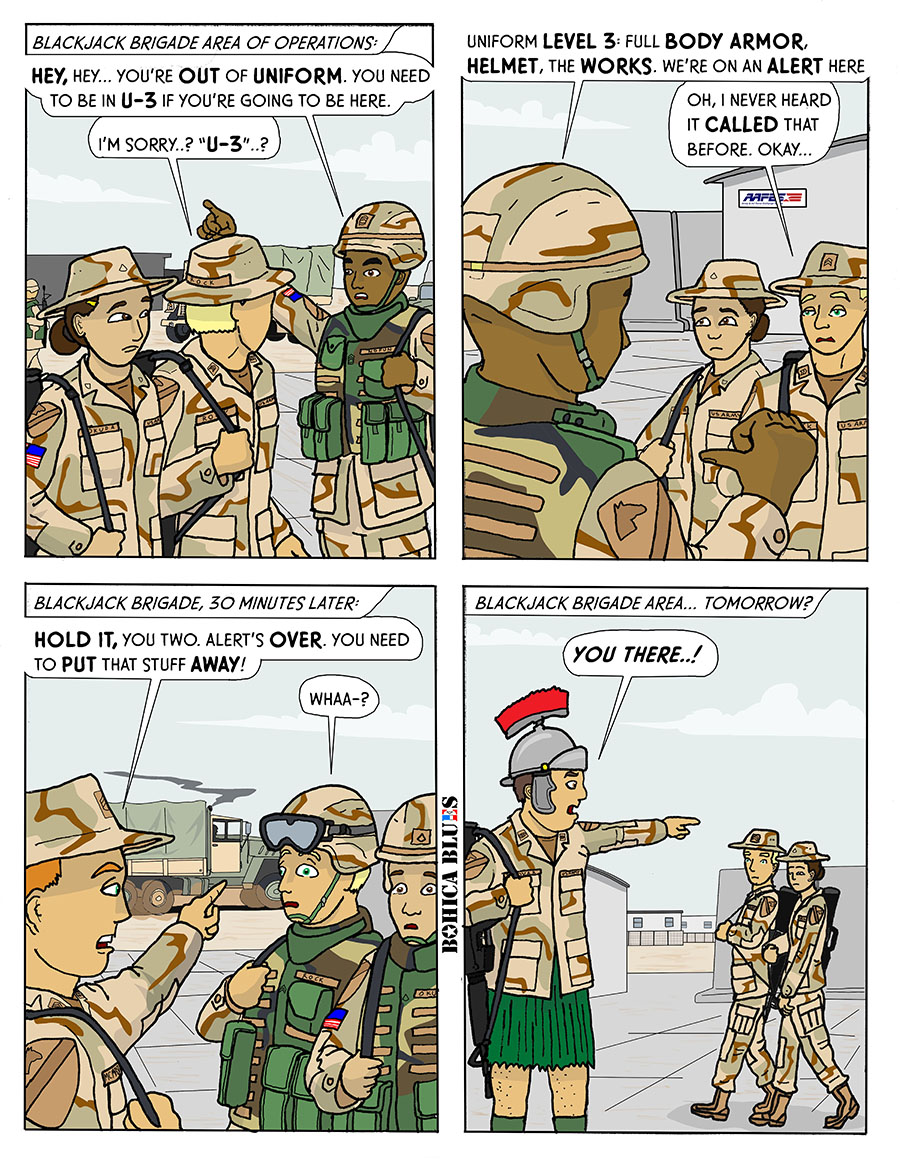 You Didn’t Get the Memo

1 June:
Something similar to this happened.

I had a more-or-less free day (that means: as long as no one higher rank sees me, and has a great idea, I have a free day) and since we weren’t allowed to go anyplace without a “battle buddy”, a young Specialist asked if I could accompany her to the PX (Post Exchange, the “general store” on base). I had no need to go to the PX, but it was better than tempting fate by hanging around the Battalion area with no obvious task at hand.

So I said yes, and we went. We went to the “Blackjack Brigade” AO (Area of Operations) which was where the PX was located. Blackjack Brigade is one of the brigades that makes up the 1st Cavalry Division, and they were more or less in charge of the PX and surrounding area– so if the Blackjack Brigade was on alert, then by damn the PX was on alert, too. We show up and there are an awful lot of people walking around with all their combat gear on, and the two of us just had on regular duty uniforms. We got stopped and told that we had to be in proper uniform.

We were told, “If you’re gonna be here, you gotta be in U-3!”. Now, I had never heard the term “U-3″ and had no idea it referred to a uniform level of readiness. I thought he said “you three” and looked around, thinking perhaps a random person was standing near us, and this Sergeant had mistakenly thought this person was traveling with us. But it was only myself and the young Specialist, with no one else nearby, so my mind being what it was, I was thinking that this somewhat inarticulate Sergeant talking to us had gone mad, was hallucinating, and was going to try to lure us away from witnesses so he could end the day wearing our skins.

As I was about to tell the Specialist “Run in separate directions; meet at the Humvee. Break!” the Sergeant explained that we had to be in “full battle-rattle“, which was a term I was much more familiar with.

We left, went back to our Brigade area, and got our full battle-rattle, now identifying it as “U3″. We put on our armor and helmets, always a joy in the heat, and returned to where we had been earlier. Even parked in the same spot; the whole trip had taken maybe 15 minutes. We were heading for the PX to finally do a little armor-plated shopping when we were stopped and told that, yes, we were out of uniform; the alert was over, and to put our gear away. We exchanged disbelieving looks of bewilderment, I looked around to see if there were cameras recording our reactions on this grand-scale punking we were receiving, and then we sighed, returned to our Humvee, and stowed our gear in the back seats to try to finish our goal of –ironically– a stress-free day of commercialism without Army silliness.

We never did find out if the next day’s uniform consisted of Roman helmets and Hula skirts; we were too afraid to go and see. But a comic similar to this one was made, and it is now pretty faithfully reproduced here, along with this tale, for your bemusement.

Needless to say, things like this are not brought up in the Recruiter’s office.