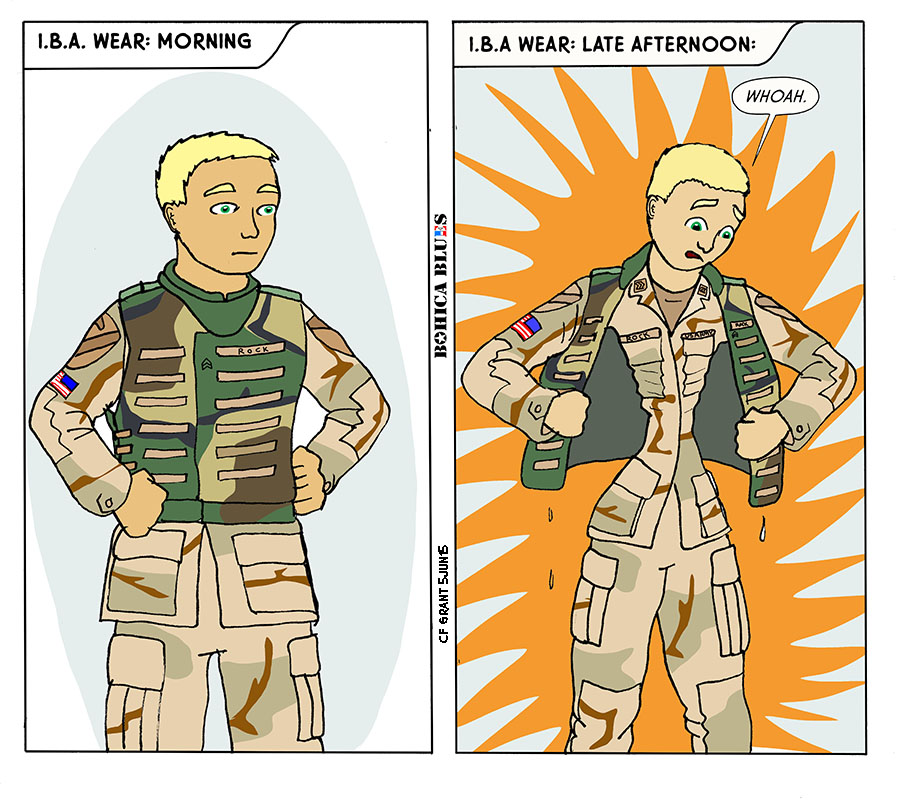 For a long time, soldiers wore “flack jackets”. They provided a bit of protection from shrapnel (the fragments from an explosive) but did little to protect us from actual bullets. The flack jackets were replaced by the “I.B.A.”, or Interceptor Ballistic Armor. It is a full vest with two thick, heavy ceramic plates in it– one in the front and one in the back. It is heavy, very thick, and needless to say offers zero ventilation. It has two big advantages: one, you can get shot right in the chest from an AK-47 and stand a really good chance of surviving, although you’ll be really, really sore. And two: the armor plates, if you situate them just right, will sandwich you up in a seated position and you can fall asleep just about anywhere.

But wearing them was grueling for long periods of time in the punishing heat. In vehicles it wasn’t so bad, because all you had to do was stand or sit, but foot patrols? Or worse yet, having to scale a fence… Anyhow, you would sweat and sweat and sweat and at the end of a single day your uniform would be soaked and there’d be salt stains were the sweat leaked out from under your IBA. Two or three days operating like this, and your uniform would stiffen up in those areas from the dried sweat and salt deposits.

Eventually, when your uniform dried out, when you put it on again, it would be… crunchy. Really, it would make crunching noises when you moved, or at least until it go re-soaked with sweat.

Carrying the load was a workout of sorts, sure, but bad for the back and knees… and a lot of the weight lost was water weight. Of course, we kept replenishing by drinking water, but it would sweat out again almost as fast when we had to wear the IBAs.