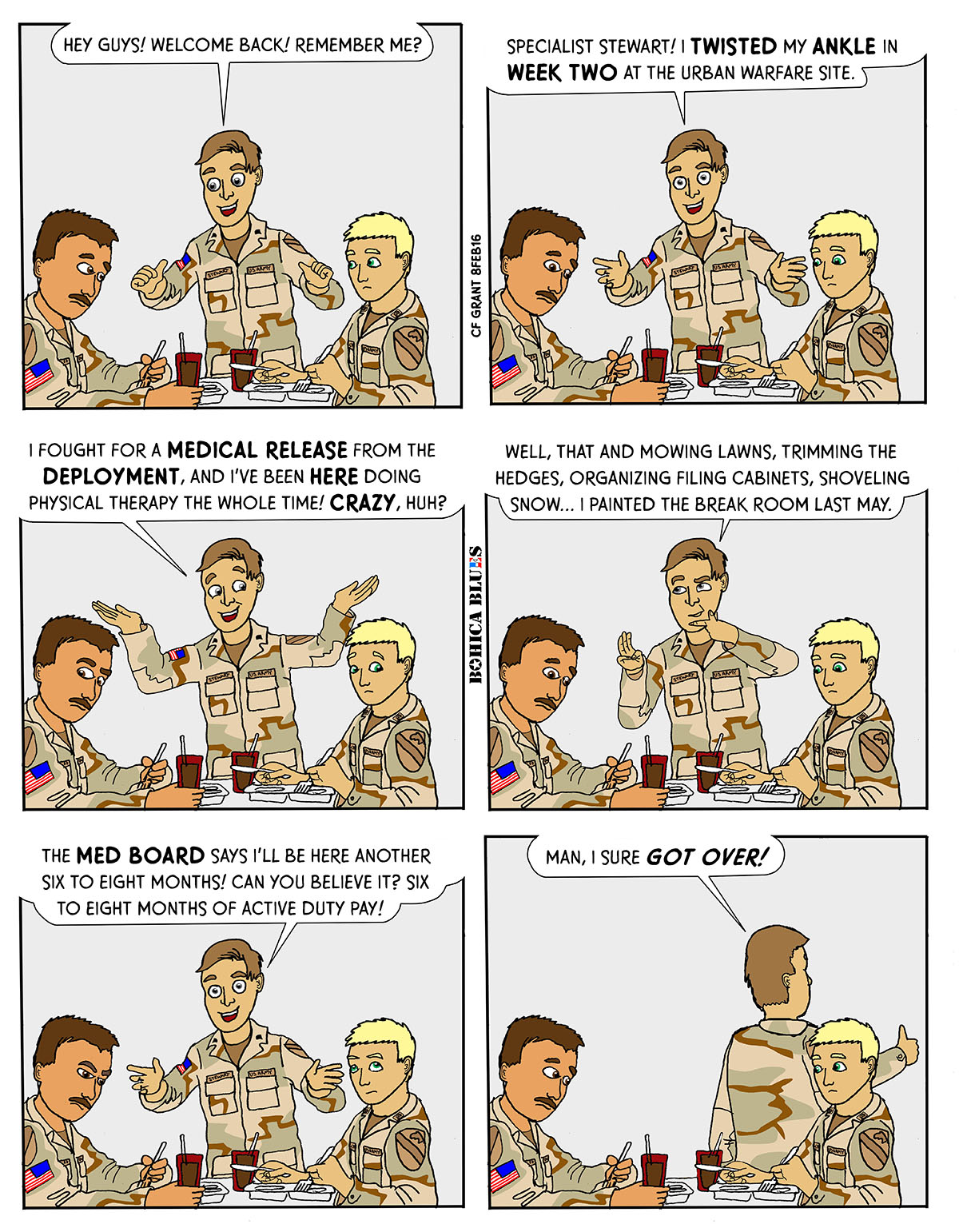 You meet these guys all the time.

“Getting Over” is a term that applies to anyone who finds a semi-legitimate means to avoid unpleasant duty. If you manage to “get over” every once in awhile on some minor unpleasant task, then your abilities to take it easy every so often are applauded, even met with awe. But when you find a flimsy excuse to get out of duty all the time, or get excused from something major –like a deployment– then what you’re really doing is making life harder and more dangerous for everyone else.

Someone doesn’t want to go on deployment– Okay, understandable. Going to war is scary. But we’re all scared. Some people, though, go out of their way to score a minor injury and play it up so they get a medical release from the deployment.

Now, bear in mind, they’re getting a release from the deployment– not from being mobilized. If someone is injured in the line of duty, the Army is obligated to take care of them, and of course they can’t be released until the Army is certain that they can’t “relapse”.

So in the case of minor injuries –injuries where it is obvious the person is just trying to duck their responsibilities– that means the Army keeps them around, frequently for the duration of the original deployment orders. In this case, the 213th Battalion got involuntarily extended in Iraq, which might mean this guy also got extended at Fort McCoy.

Then, when the  original units come back, these guys will sometimes meet up with them, and try to pick up old friendships… but a huge gulf of understanding has opened between former comrades, and there’s nothing you can really say. A person that desperate to duck their responsibility, and let others go instead, isn’t someone you want along, not really. And they really take away from the guys that were willing to go but suffered serious injuries and honestly weren’t able to make it.

In a way, there’s a sort of justice to letting the Army keep them around doing menial chores. They can always be that guy that has to answer “what did you do in the war?” with “well, I mowed lawns in Wisconsin.” There was more sympathy for people doing this back in the days of the Draft, when a lot of people didn’t even want to be in the military in the first place. But in today’s volunteer military, to back out at the last minute on thin pretense, with no regard to the guys who were counting on you, is a special kind of disappointment.