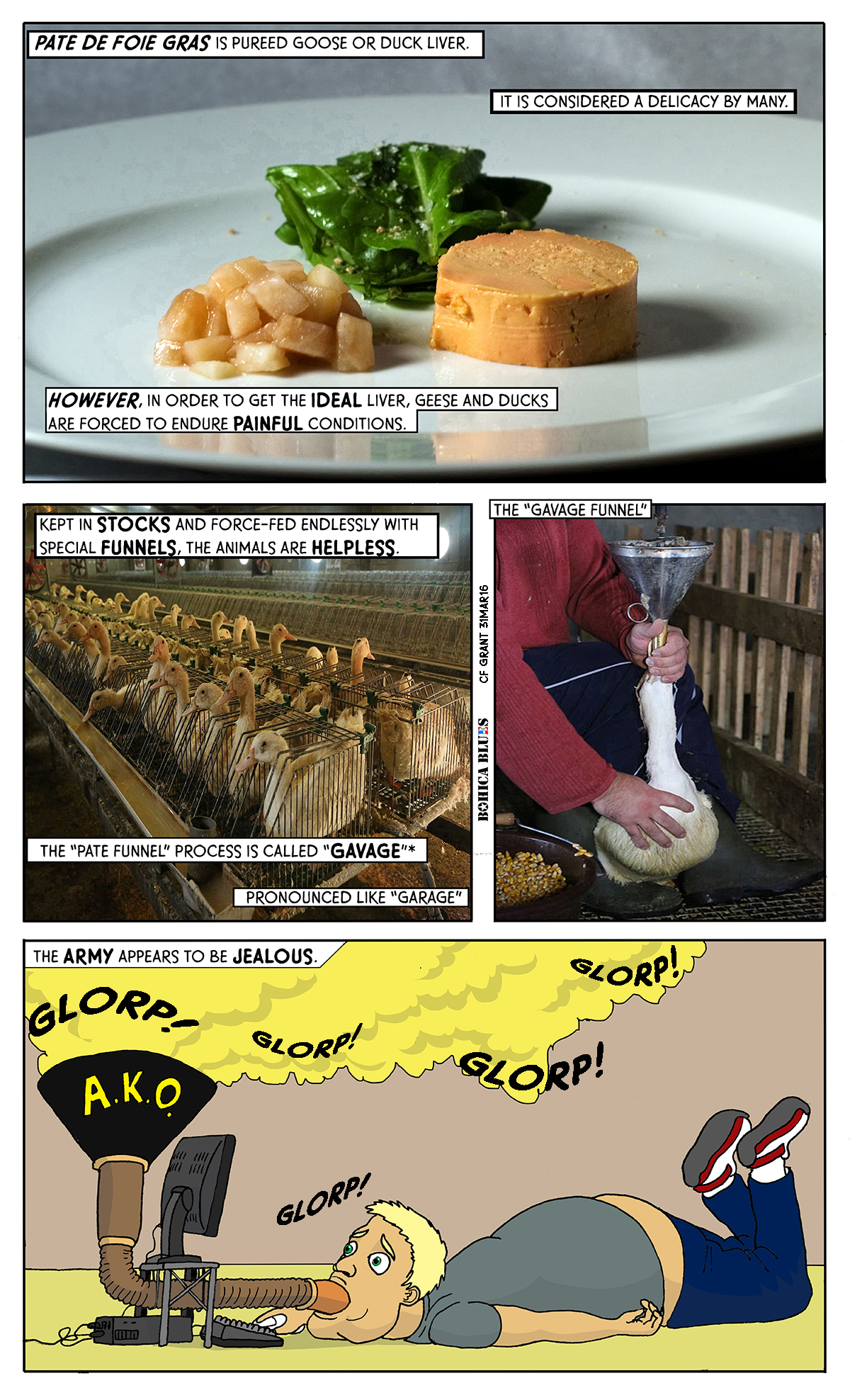 Years ago, I was sharing an apartment with a girlfriend when she came home one evening with some groceries. In the bag, she had a small canister with a paste-like substance inside. “It’s foie gras,” she said, “It’s supposed to be like caviar.” Namely, the well-to-do eat it. I tried it and rather liked it, but it’s expensive so it never became a regular part of my diet. It wasn’t until years later when I was trying to find the mysterious substance that I ran across the full story of how foie gras is made. Needless to say, it remains off my regular food list.

This will be my last complaint about the Army Knowledge Online “gavage funnel” that is constantly used to bring mundane chores into our lives– well, at least for awhile. I’ve learned that there will always be some new frustration cooked up by the Powers That Be to reach out and touch someone on their off time. But if any of that mysterious cabal of Sergeant Majors are reading this, I’ll let you know something: it used to be that if a younger person asked me about joining the Army Reserves, I would gladly talk it up. All the Recruiting stuff about part-time, serve near home, college money, blah-blah, whatever… but also the ease with which one can set aside Army chores and live a normal life, and then just go “Army mode” one weekend a month. These days, I don’t do that.

When you have a crushing load of college course work to do, and papers are due and exams are looming, the last thing you need is some 2-hour long PowerPoint show drilled into your head. When you come home from a long day of work and just want to relax, maybe bond with the wife or kids or play with the dog and vegetate in front of the TV, the idea of listening to a droning voice telling you “Drinkin’ & Drivin’ is BAD, MmmmmKay?” just doesn’t do it for you. Especially if your civilian job is gavage-funneling similar “great idea” lessons through your office work station.

If young people ask me today, I tell them either just commit to full time, Active Duty regular Army, or don’t bother. Because you’re going to end up feeling like you’re Full Time anyway.

Before anyone asks, no, I was not rushed for time. I always intended to use the photos instead of drawing the gavage process. I am not a vegetarian; I love meat and have no intention of giving it up, but that said, there’s no reason to be a jerk to the animals.  Instead of buying things like foie gras, or other things that require mistreatment, I pay extra for humane and organic.