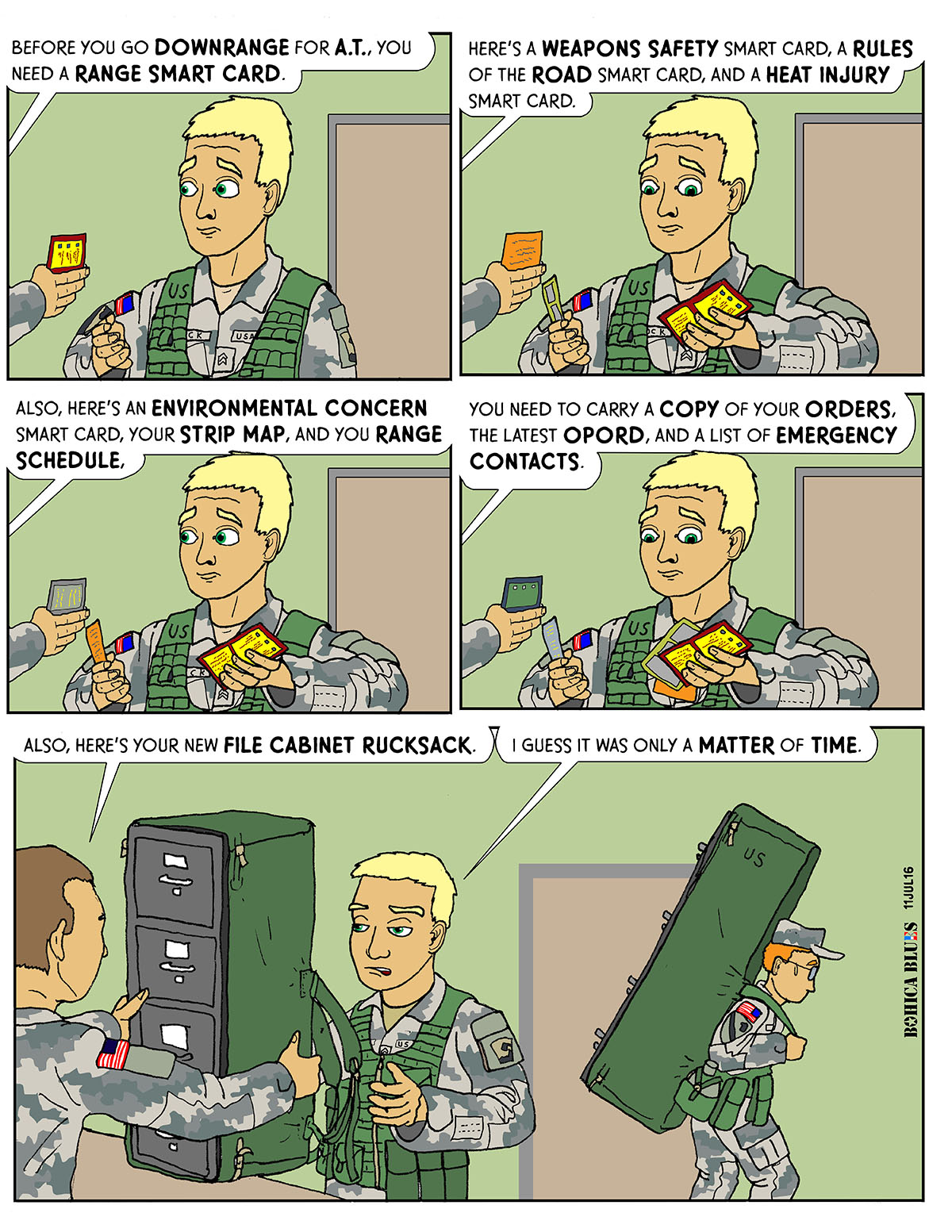 A “smart card” is a small card-sized item that can be easily carried in a pocket. The early ones were abiut the size of a typical business or wallet card, but then someone figured out that uniform pockets are usually bigger than most civilian clothing pockets– and you can fold the cards to put more information on them. So far the largest ones I’ve seen will have multiple folds, like a road map, and will unfold to be about the size of a regular 8.5×11-inch piece of paper. They’re usually printed (double-sided) on some sort of cardstock and about half the time they are laminated, so to be durable.

Every single one of the “smart cards” I listed in the above comic have, at one time or another, been issued to me by name. If anything, I have under-stated the number of “smart cards” we have been given. There are cards for Army values (duty, loyalty, honor, courage, the usual laundry list that you’d expect) and cards given for suicide prevention, sexual harassment, hot weather safety, cold weather safety, first aid tips, determining your overall health level by the color of your urine (seriously), phone numbers to call if you’re feeling depressed, and so on. Add to that each installation will have it’s own “smart cards” to hand out– base Chaplains or Sergeant-Major’s office (it’s a trap!) and taxi services if you’ve had too many downtown.

Now the idea is basically good, and obviously these are well-meaning. But after awhile it –like everything else– drifts into “overkill territory” and we’re dealing with a tidal wave of ridiculous. All the best information in the world, diluted down to a wallet card of bumper stickers, eventually gets processed into so much “white noise” and is greeted with an eye roll.

The real kicker is… military uniforms have huge pockets, and we’re given things to put in them, but guess what? Yup– you better not look like you have stuff in your pockets, otherwise you have an “unkempt” or “sloppy” appearance. They’ll probably give you a smart card about wearing the uniform. Thanks for nothing.