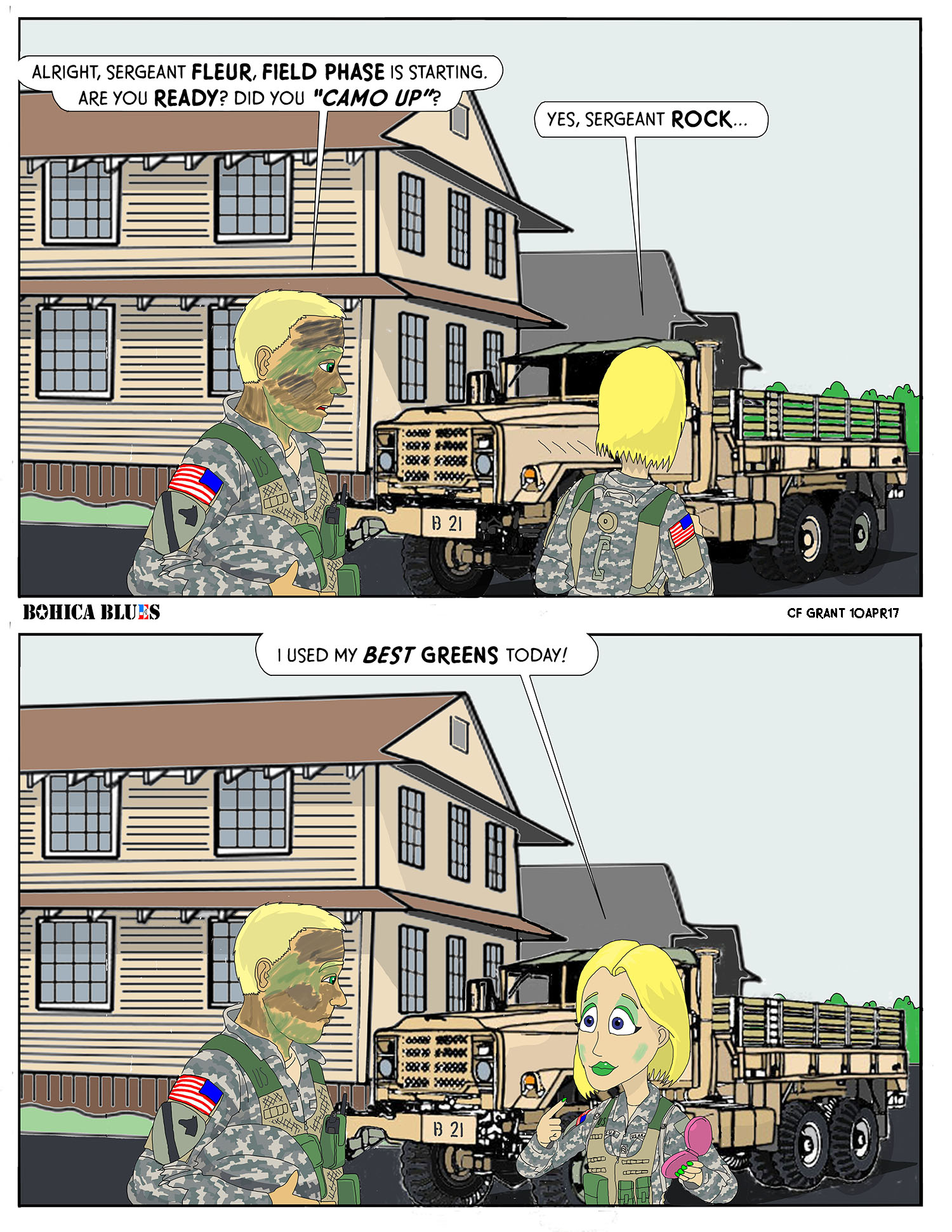 Camouflage face paint is one of those things that seems to come and go with the Army. I remember a time when we always put that stuff on when we went out to the field; and then it seems to go “out of fashion” for awhile before it comes around again. I’m not sure if it is a commander’s discretion to use it or what. It’s fun to use sometimes, but after using it too often it becomes a chore.

There’s a right way and a wrong way to use camo face paint. You want to do something called “counter-shading”. In normal sunlight and shade, things on top will be bright, and things on the bottom will be dark. “Counter-shading” is reversing that: putting brighter colors on the bottom, and darker colors on top. You reverse the normal shadows so that your face doesn’t look like a face anymore. So Joe has dark colors on all the parts of his face that would normally be reflective of the sun, and the lighter green underneath. He doesn’t put stuff in his hair since the helmet will cover that.

On the other hand, Sergeant Barbara Fleur just doesn’t seem to “get it”. She mostly works in an office, so approaches it like makeup. It may have been noticed that I sometimes draw female soldiers with makeup on (except when they were in Iraq)– there are actual rules for that.When in “the rear”, or in the nice, safe “garrison” environment, female regulations allow for “traditional” makeup so long as it is not too garish. If that sounds open to interpretation, congratulations, you’ve found one of the constant background-noise arguments that permeates the Army, especially the Reserve and Guard forces, where female soldiers are in the civilian world 90% of the time.

So typically, “traditional” nail colors, lipstick, and so on are accepted, but when females put on those tiny decals on their nails, or show up with “Goth-girl” eyes or the “Tammy Faye Bakker” look (Google it) they will probably be told to remove it. There are even rules for hair color: hair coloring can be any “natural” hair color, but no pinks, purples, or greens for example. Rules about hair color and piercings apply to males as well as females, but as far as I know no male soldiers have tried pushing their luck with make-up (although it has probably happened and I just haven’t heard about it).

On an art note, I have been experimenting with the “Layers” function in PhotoShop like never before. The barracks in the background were done entirely separately, then the 5-ton truck added. The characters were done separately and added as well. I am going to try to build a steady library of backgrounds to use, which I can draw all as separate pieces of art so they look contiguous as well as to speed up production.