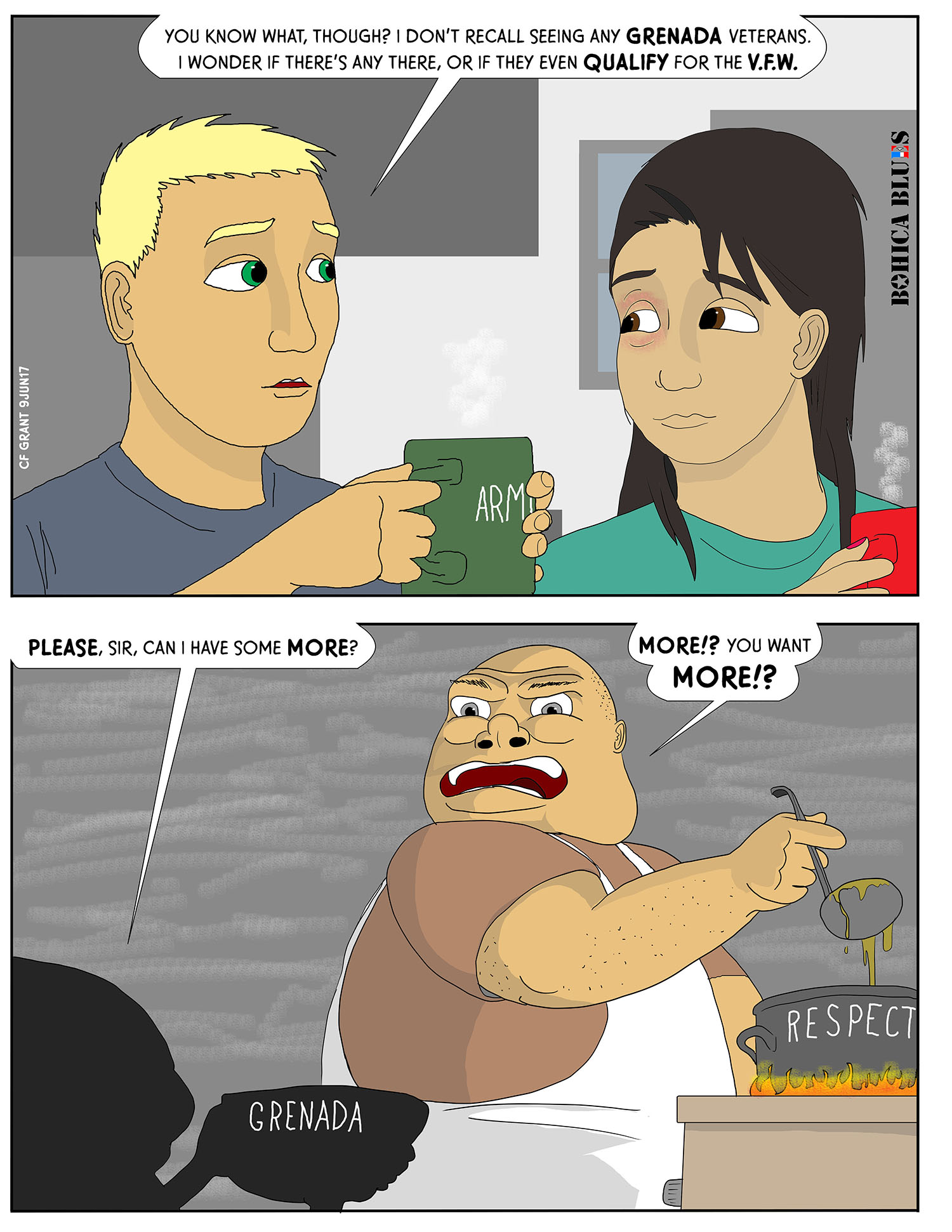 The U.S. invasion of the tiny Caribbean island of Grenada happened in late 1983– The 25th of October to the 15th of December 1983, to be exact. These dates are misleading, since real fighting lasted about three days, with a few more days of sporadic resistance that rapidly dwindled.

Looking back, it is almost completely forgotten– one of many Caribbean-region interventions by US forces over decades of time. If it happened now, I doubt it would receive the coverage it did. But at the time, it was a huge deal. The United States had, just ten years earlier, withdrawn combat forces from Vietnam (a few still remained, but not enough to say we were realistically able to exert much influence) and by 1975, the South Vietnamese regime we had been supporting fell to the North Vietnamese. This, of course, made the whole effort feel futile (or “more futile” if you were one of those who’d felt that the whole thing was a pointless endeavor all along).

For years, there was a feeling that U.S. foreign policy –especially regarding use of force overseas– was in question and some disarray. There was a great deal of upheaval in Central America and of course Cuba at the time was regarded as a thorn in the side of the nation that wasn’t going to be dislodged any time soon, and Cubans were even sending expeditionary forces overseas to counter U.S. interests directly (specifically, in Namibia). Just a few days before the invasion, the U.S. Marine barracks in Beirut, Lebanon had been bombed by a truck bomb, killing hundreds of US Marines and over 50 French Foreign Legionnaires. For some people, it looked like U.S. foreign policy was in retreat– with a black eye, too boot.

Then, along came the attack on Grenada. Grenada is a very small island in the Caribbean– just under 350 square miles of territory with a population in the range of around 100,000 or so. There were a few hundred Cuban personnel there, most of whom were part of a sort of paramilitary construction engineer type service, and less than a hundred actual uniformed personnel with a handful of armored vehicles. The U.S. forces attacked in a combined arms strike with paratroopers, naval gunfire, helicopters, air strikes, and so on. Needless to say it was a very one-sided battle, although there were casualties.

While in general the invasion had support, there was a lot of criticism as well. The U.S. forces had a hard time coordinating their efforts and it seemed to those who analyzed things that, despite the overwhelming amount of force the U.S. brought, they still worked too hard to achieve what should have been a much easier victory. But for many, this felt like America’s first “win” after a decade of stagnation. Still, it did little to offset the dark shadow that Vietnam still cast over the military.

When I joined the Army, I mentioned that there were still some Vietnam veterans left; although they were getting up there in years. In my unit we had one Grenada veteran, a “Grenada Raider”, who (it seemed) was always trying to impress people with “war stories”, to the amusement of the Vietnam vets. Even some of the younger troops seemed to dismiss the experience as a sort of one-off event of little consequence. Perhaps the thing that made it seem more daring than it was, was because of the still-tense relations between the United States and the Soviet Union, and we were shooting directly at Cubans, who I guess we always assumed were the Soviets’ “favorites”.

Today, Grenada service is recognized for VFW membership, but there are few veterans of this brief, isolated conflict.