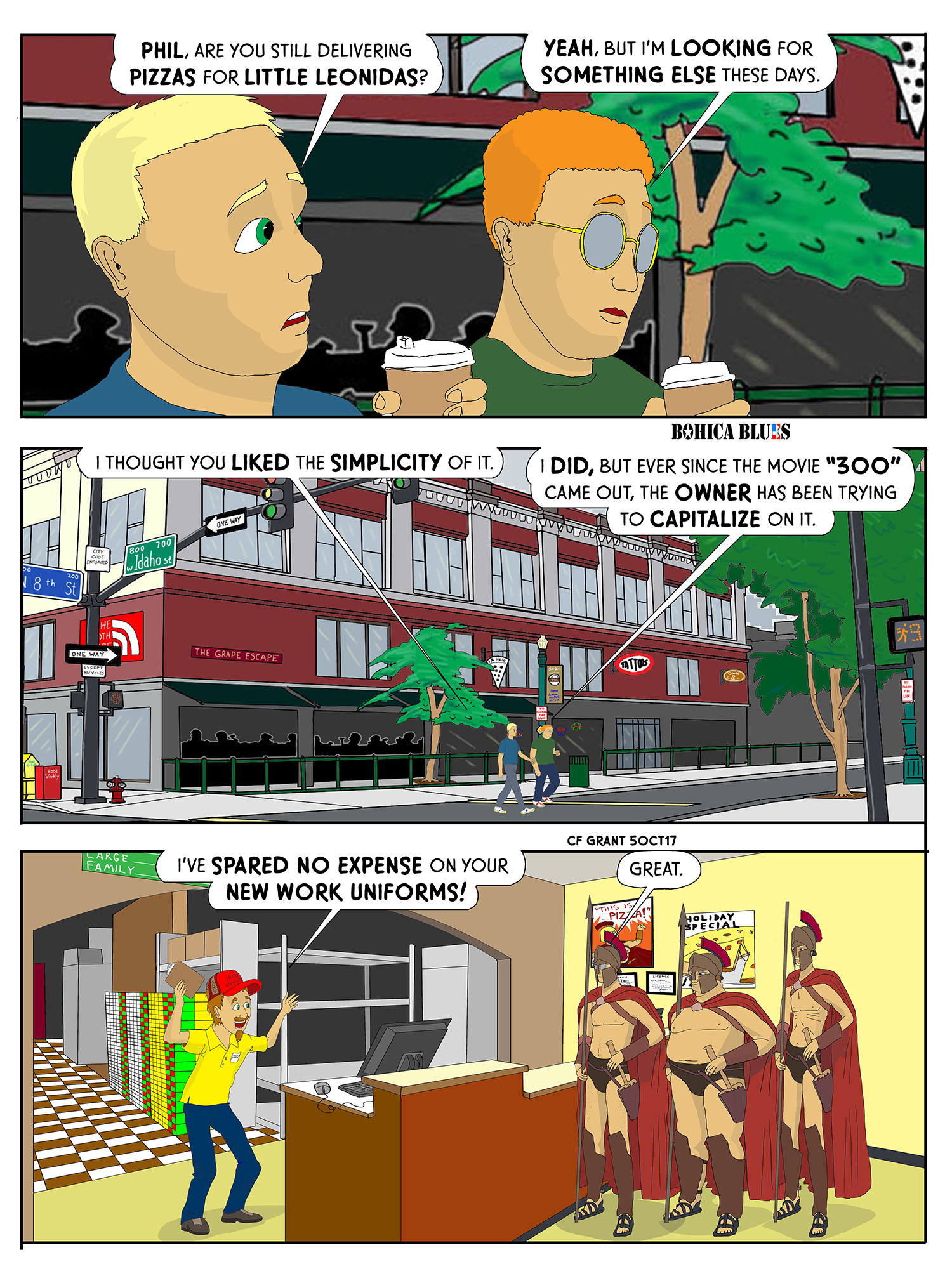 See? Even in the civilian business world, the Good Idea Fairy can strike.

The movie “300” made quite a splash when it came out in 2006. The comic BOHICA Blues is, by now, in fall of 2007 and the film was still well-received by fans even at that point. I watched it and enjoyed it (even have a copy) but while fun it didn’t make much of an impact on me. Still, when thinking of a pizza delivery chain for Philip to be working at, I thought of “Little Caesars” and came up with “Little Leonidas”. I used the “Little Leonidas” name on the comic “TYFYS” not so long ago and decided to use it for some more inspiration.

When popular movies come out, stores –and especially fast food restaurants– love to tie in their business image with something to do with the movie, at least as long as they can. “Little Leonidas Pizza” decided to go whole hog. We’ll see how long Philip stays with them… or if the boss’s overreach creates his own problems.

As far as the art goes, I tried something new with this. I’ve been taking pictures of Boise and I am making comic versions of them to put in as backgrounds. I made a “Little Leonidas” “set” for future use as well. I’m going to see if this allows me more flexibility in the future. It takes time to do the backgrounds (I actually did the building & street crossing a couple years ago) but when I can concentrate on ONLY the background I can explore detail to a degree I prefer, even if it means the background itself will be somewhat static. We’ll see.

On a side note, I don’t mean to boast or call anyone out or anything, but…

…on Tuesday, October 3rd, “Terminal Lance” –the famous U.S. Marine comic– posted its 494th comic. I  went and looked at my spreadsheet where I keep track of all my comics and realize that this one is my 486th comic since I started posting in November of 2013. I am only 8 comics behind “Terminal Lance” as of this post. I’m sure he’ll reach his 500th comic first, but it will be about even. Thanks to all my readers for their support, and I hope this has been a meaningful journey so far.