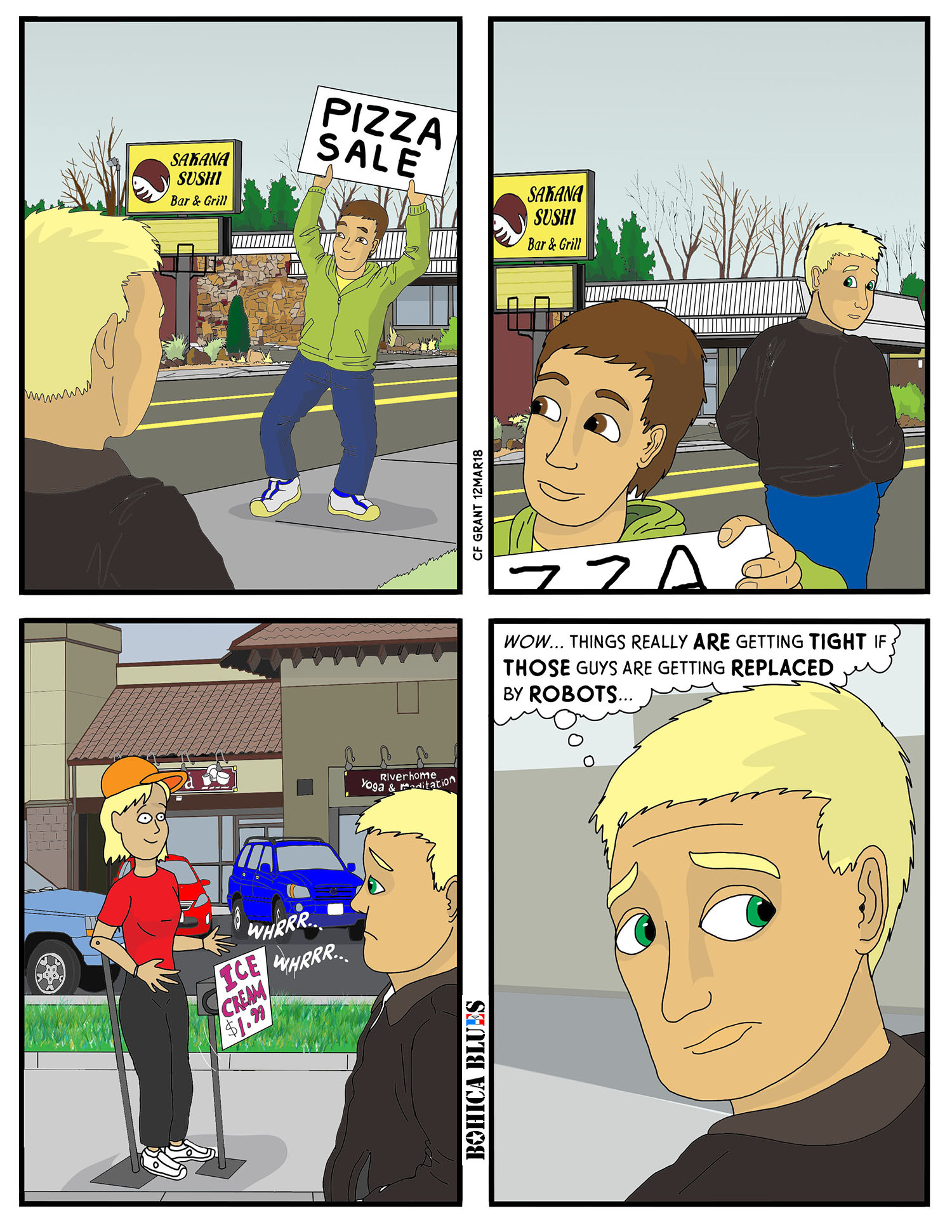 So Weekend Drill is over, and Joe gets back to his daily life. “Daily Life” now consists of job hunts, since his time at Boise State University is running out soon. Of course, when you’re looking for a job all the signs and portents around you always seem to be full of gloom and foreboding. I remember looking for work and seeing those “sign dancing” people on the street corners and figuring that times would be hard indeed if I had to try falling back on that, but I’d grit my teeth and deal with it if nothing else.

Then I remember the first time I saw one of the “robot” sign dancers: an old store mannequin that had been repurposed; a simple gyrating device was used to hold the sign while the mannequin stood behind it. I saw one in winter and the mannequin was dressed in normal street clothes– at first I thought “that is one hard-core girl” until I got closer and saw it was a dummy. This was my exact thought: “Now even those poor guys are getting replaced by robots!”

Anyhow, I have worked up a couple new background “sets”. This scene takes place on Vista Avenue in Boise, and the stores pictured here are the modern versions. BOHICA Blues is supposed to take place 10 years on the past, but for decades Boise was one of those cities that didn’t change much: things were pretty much frozen in time. That was the Boise I knew and grew up with. When I started this comic, it did not occur to me to take pictures of things as they stood at the time. The restaurant in the background, “Sakana Sushi”, was actually a Chinese buffet at the time, and had been for probably fifteen or twenty years. I don’t remember the name or the decor. And the other store fronts reflect the “Vista Village Shopping Mall” in it’s modern form as well– years ago it was pretty dilapidated and run down. So in today’s comic, the background is 100% anachronism, like a lot of my Boise-based backgrounds. I take pictures and “build sets” in PhotoShop as I need it, so you are seeing modern Boise in a decade-old story.

Anyhow, enjoy the comic and be sure to visit the Patreon page to see more weird stuff! I will be adding more stuff for my Patron very soon, and upgrading some of my rewards as well, so consider dropping by and checking out some of the publicly-available stuff, and consider becoming a regular supporter so I can not only offset some of my costs but also bring new projects to the world as well: