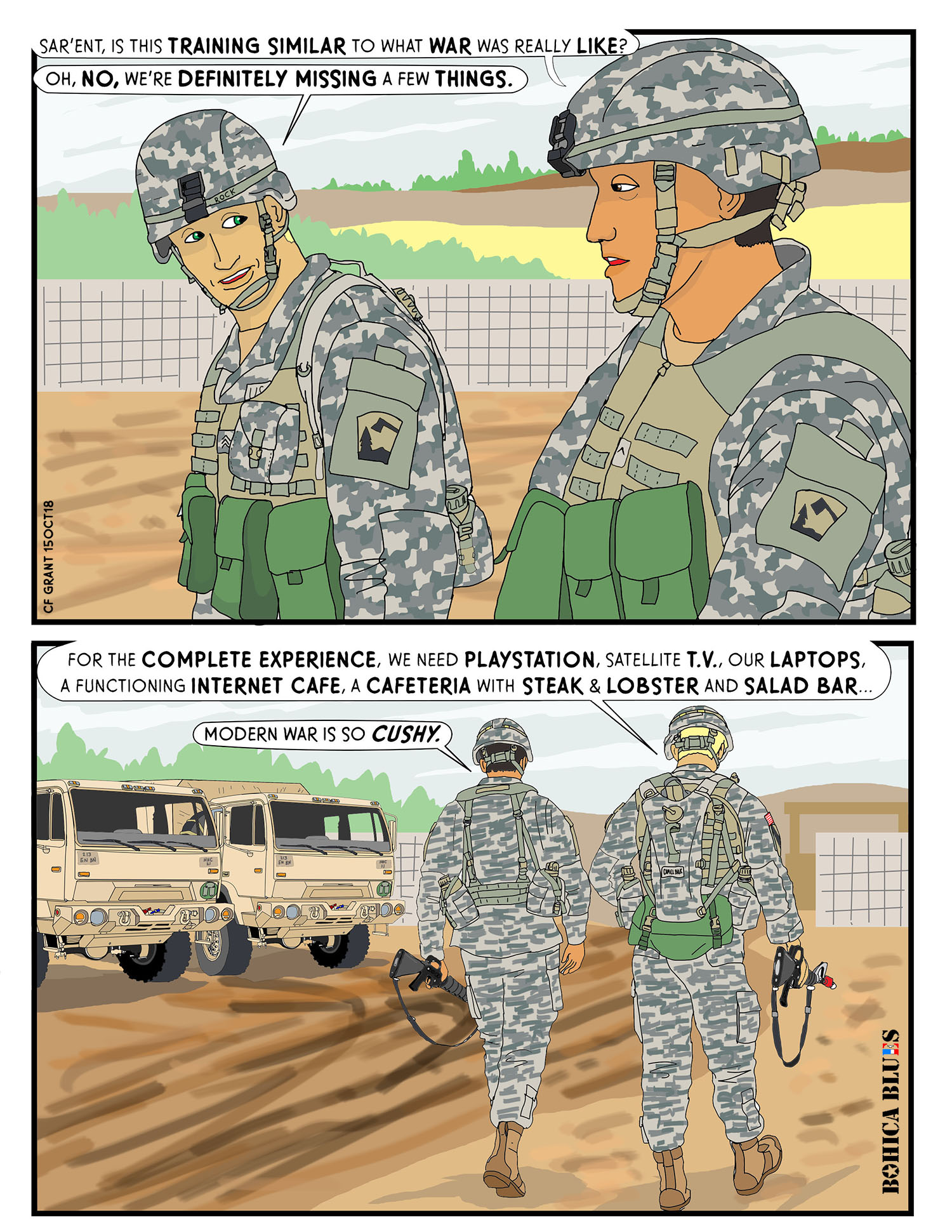 Having grown up on movies about World War Two and in a few cases Vietnam, I thought I was mentally aware and prepared for what war was going to be like. Particularly in the World War Two movies, war was mostly portrayed as gritty and filthy all the time, with constant movement and sleep caught in quick (and largely unsatisfying) bits and pieces. From the Vietnam movies I knew about the concept of “firebase” warfare, in which troops were stationed at a more-or-less stationary “base” that they operated out of on a basis that could almost be called routine.

I was surprised to find myself in a trailer park with a strip mall and regular cafeterias that would not be out of place in any large institution back in the States. All the things described above –video games, cable or satellite television, steak– were common occurrences where I was at. Even when I went out to a more remote forward base, we had a level of comfort that I found surprising.

It is hard to describe this to younger soldiers fresh from training. When out higher-ups tell us that we’re going to go “out to the field” and “train under wartime conditions” I replied, “so we’re going to sit in air conditioned barracks for 10 hours, go out and do a 2-hour tower guard, then come back in and repeat the process?” Maybe we’d intersperse the routine once every five days with a firefight that stretched out for about 3 hours before starting the whole process all over again.

But it did give me a distorted view of war: my experience with war was the war of counter-insurgency, not mobile armored clashes with a peer nation rival. In counter-insurgency warfare, a lot of troops end up doing some kind of routine from a regular or semi-regular base. In some cases between two distant bases, if you’re assigned to some sort of convoy or route-clearance duty (checking roads for mines or roadside bombs).

Peer-nation warfare, though, is a different story, and staying in one place is an invitation to danger. An adversary that can send tanks, planes, and missiles at you that are good and as numerous as your own will quickly find a permanent base and overrun it. US Army doctrine at the moment is trying to switch away from counter-insurgency warfare and back to preparing for peer-nation warfare… which means a lot of us that learned lessons in Iraq and Afghanistan have a lot to “unlearn”.

Can’t get enough comics? Join my Battalion as a Sergeant at Patreon and read a science-fiction story I wrote about peer nation warfare…. on a far away planet. https://www.patreon.com/Coyote