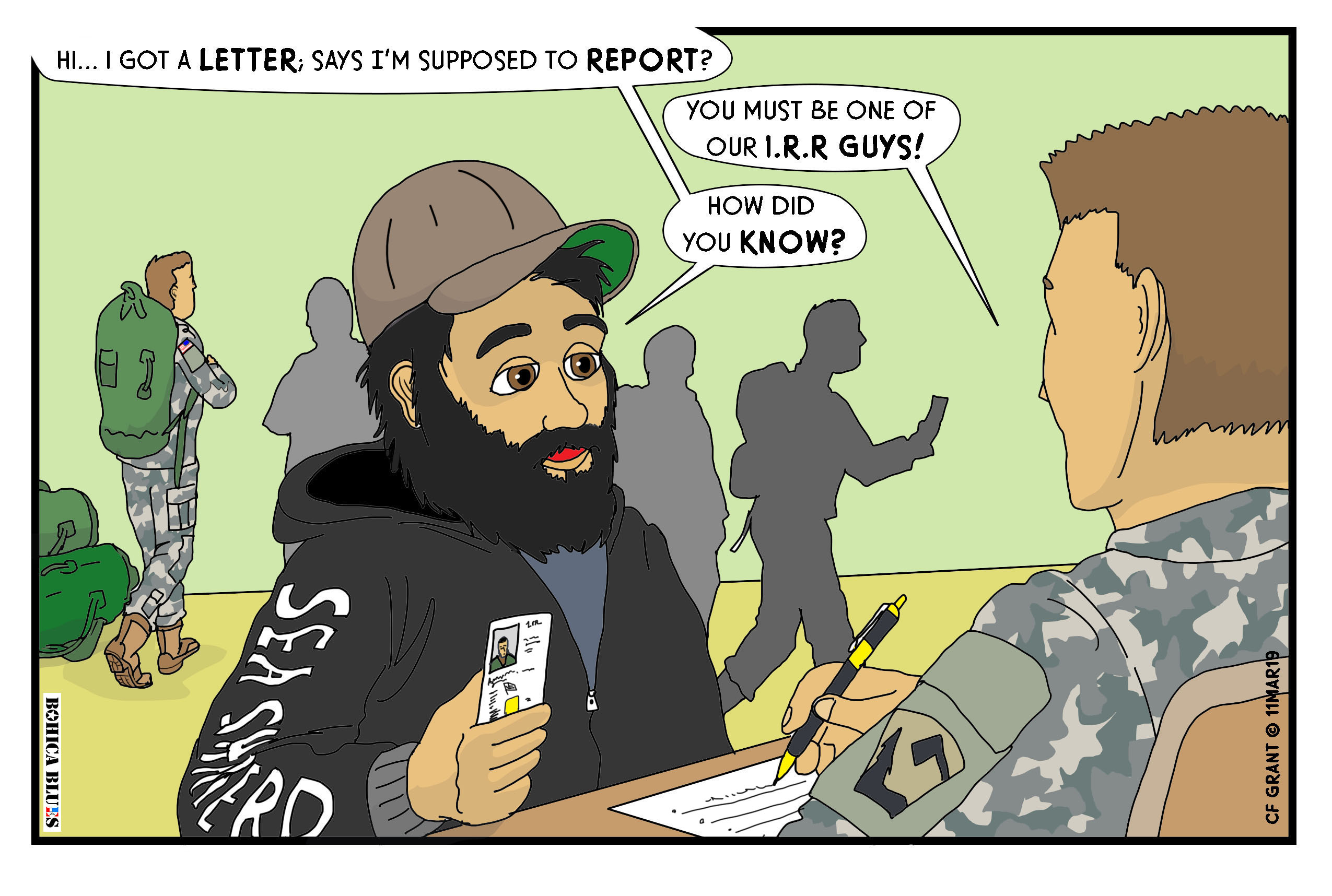 What is the “I.R.R.” and who is this familiar fellow?

First, the I.R.R.: The I.R.R., pronounced as “eye-arr-arr” and not as “irr”, is the “Individual Ready Reserve”. These are people who are officially part of the Army, but they don’t attend monthly drills. Of course, they don’t get paid, either– you only get paid when you actively participate. I.R.R personnel are supposed to attend once-a-year “Annual Training”, but many do not do that, either.

Unit leadership is supposed to track them down and make them attend, but it is usually more trouble than it is worth. I.R.R people all have different reasons for not participating, some good reasons and some selfish, but the stereotype is one of unmotivated people who cannot be relied on when forced to participate. It’s an unfairly wide brush to paint with, because I have met some IRR soldiers who were actually quite professional and highly educated and motivated, but their civilian professional schedules simply did not allow them to be members of regular monthly drill units. However, it is true that many adapt entirely to civilian life, grow their hair & beards, and become unrecognizable as soldiers.

Yes, it is Brad Patterson, the guy from Madison, Wisconsin that joined them as a “fill” on the first deployment to Iraq. Regular readers may remember him as the guy that was “in rehab” when he got called up to deploy, who originally just joined “for the college money”; then he shot a terrorist and drank a smuggled bottle of wine afterwards due to his feelings of guilt.

So why is he coming back to the 213th in Boise, Idaho, instead of a unit in his home of Madison, Wisconsin? Well, when I got mobilized as a “fill” to a unit in Johnstown, Pennsylvania, I became a full fledged member of that unit. I was on their pay roster, their personnel roster, all of it. None of my paperwork went through my home unit and then forwarded to my temporary unit– I was 100% their guy. When we came back to the States, I was still theirs until I officially re-joined my home station in Boise, Idaho. I was even invited to continue with the Pennsylvania unit and fly out once a month to attend drills with them. I politely declined, which of course was expected.

Brad Patterson came back, de-mobilized, and left the country. He was deeply affected by his time in Iraq and we found out in 2017 that he joined the “Sea Shepherd” organization because he felt like “he wanted to save something” (instead of destroying things). He never officially quit the 213th and stayed on the rolls, and they simply moved him into the IRR. So, now that the 213th is being called up again, they look on their personnel rolls and see that there is a Mr. Patterson, Bradley, still there from their last deployment. So a mobilization latter goes out, and now we get to see what has been going on with him all this time.