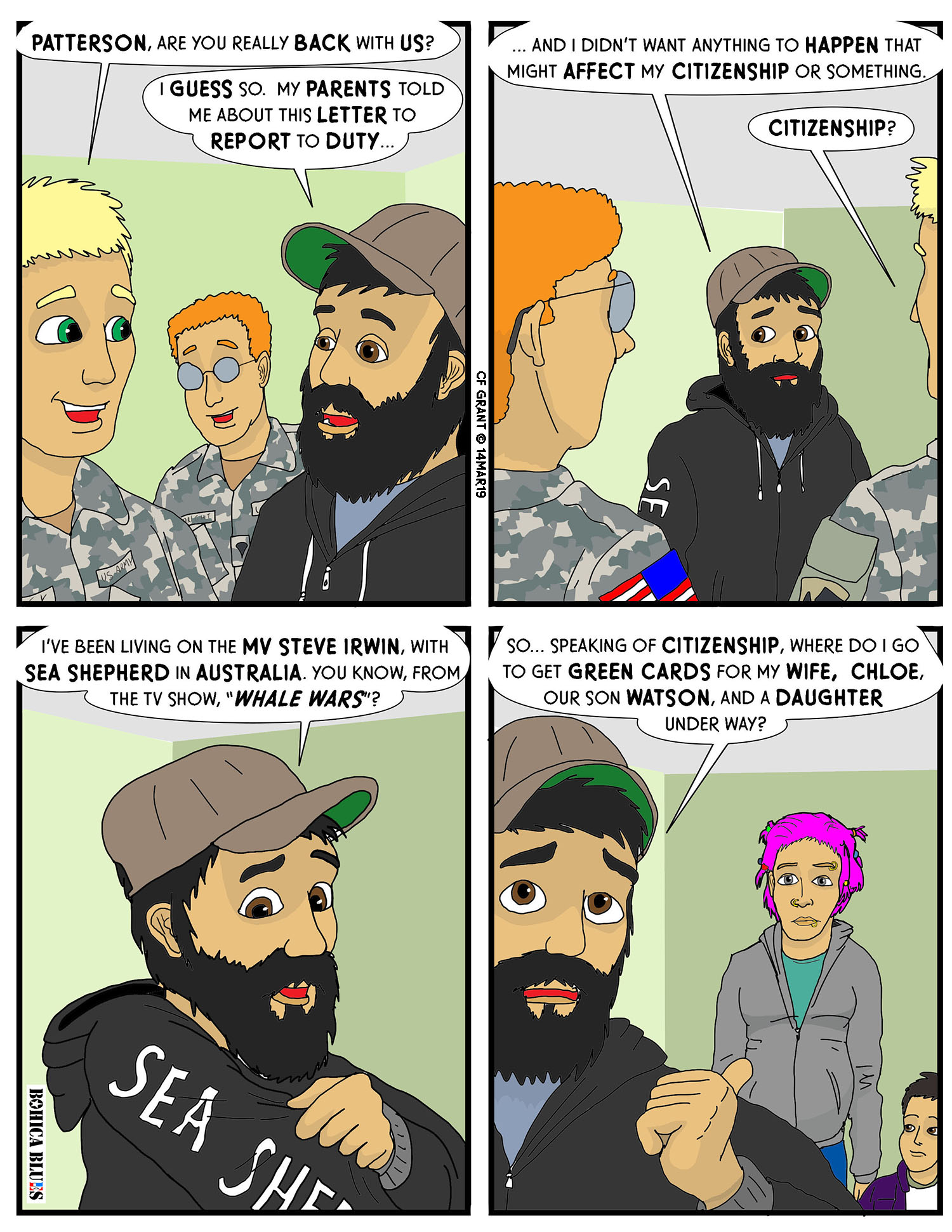 So, Patterson is back, and he doesn’t come alone! He left the United States to live (technically) in Australia, where the “Whale Wars” crew of the “MY Steve Irwin” was based out of (in ship terminology, “MY” means “Motor Yacht”, and is different from “MV”, which is “Merchant Vessel”). He served shipboard pretty much the whole time since leaving, and it has been a few years. Since I’m leaving time kind of ambiguous and not keeping strictly to events as they happened, I’m clocking it around four years or so.

So he’s now got a wife and kid with one more “under way”; Chloe is Australian and the kids were born down there, so he’ll need to sort things out with Immigration so they can stay. She’s not too keen on him going (as you can imagine) and he’s hoping that he will be told they don’t need him, but the Army doesn’t work that: your warm body reported in, so they’ll find a way to make you useful! If he had stayed in Australia or at sea, and claimed he never got any notice, his citizenship and ability to return to the United States probably would not have been affected– but Patterson doesn’t know that. He wanted to play it safe and he’s an honest guy at heart.

So she will have to file an I-485, or Immigration Form 485, to stay in the country as more than a tourist, and he will file an I-130 or Immigration Form 130, which is a Petition for Foreign Spouse. It takes time and there are fees and interviews involved. The old idea of “you can just marry an American citizen and it’s automatic” hasn’t been true for many, many decades– although it certainly does make things easier.

In other news, things have changed at the ol’ Patreon page. I eliminated one rewards tier, the “Sergeant Major” tier, and rolled most of the benefits over into the “First Sergeant” tier. There were no real differences between the two and I have to admit I was not prepared to follow up if someone surprised me by signing up for that rewards tier. I will also begin posting Book 2 of my science-fiction action-adventure series from the 1990’s, available to “Sergeants” and above; Book 1 (10 full chapters) wrapped up on February 15th.
Check out Patreon for more and consider joining the Battalion as a supporter!
https://www.patreon.com/Coyote