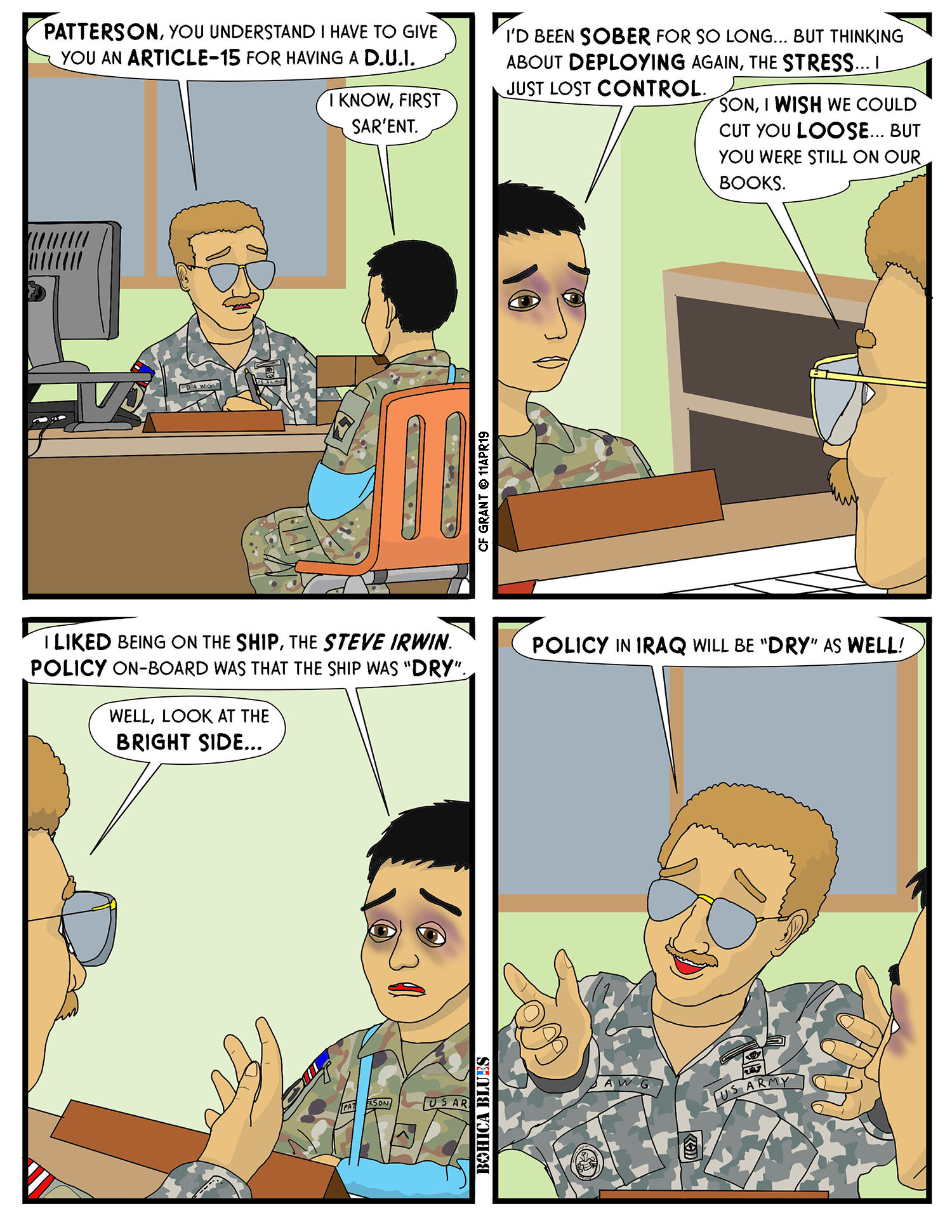 First Sergeant? “Helping-not-helping”.
So why does Patterson have two black eyes? He had an airbag deployment during his accident; no one else was injured (I figure he hit an inanimate object and not another vehicle & driver) and his own injuries were minor as well. I understand that happens to a lot of drunk drivers; they are so relaxed during impact that they just kind of bounce around and don’t break so much. Never having been in a drunk driving accident myself I can’t know if this is the real deal or just apocrypha.

So. Why doesn’t the 1st Sergeant just kick Patterson loose? Well, each unit has something called a U.M.R., or Unit Manning Roster. I may have mentioned it before, but to recap, that’s a unit’s listed strength “on paper”. So basically, someone could look at the UMR and say “you have 500 positions available, and according to your UMR, you have at least 400 of those positions actually filled”. But the truth is, of those 400 people “on paper”, maybe only 250 actually show up for weekend drill on a regular basis. The rest are assigned to the unit but don’t show up, and many are “IRR” or “Individual Ready Reserve”, which I mentioned not too far back.

So here’s the sleight-of-hand: most commanders would love it if everyone on the UMR showed up for weekend drill. But they accept that some just don’t show. Some have legitimate reasons, some are unmotivated or uninterested, a few will be just lazy or have negative attitudes, and there will be a few younger naive ones who left the Army and don’t realize that they are still on the books somewhere– they think they are 100% out and have no responsibilities any more.

Why doesn’t a Commander “clean out” these rosters? Many reasons. A Reserve or Guard unit has a full-time staff but they are usually deeply involved in managing daily needs of the unit and preparing for the next Drill. They’d rather spend their time on the people who actually show up and participate; poring through old records and finding out when a person last performed any meaningful participation and processing paperwork to get rid of them is time-consuming. Plus, to be honest, a full UMR keeps a unit viable– once a unit dips below a certain number of personnel, there is the chance they could face budget cuts or even “have their colors furled”, which means the unit is disbanded and its flags and awards retired.

When the 213th was mobilized, someone doing paperwork looked at the UMR and sent letters to all the names that were on the books telling them to report. Probably no one who knew Brad Patterson as an individual saw his name, or asked why a guy from Wisconsin was still listed as being with an Idaho unit. He was a name on a list, so a form letter went out. Patterson is an honest guy and he answered, even though he knew it was bad news. And now the 213th needs people, and they can’t pick and choose favorites to dodge the bullet, since let’s face it, everyone has a good reason not to go.

The impersonal bureaucratic machine simply acted automatically, and now with “stop-loss” in effect, no one can be cut loose without serious (usually medical) justifications. Even people with medical conditions are frequently kept, even if they are placed in a stay-behind status and given administrative tasks.