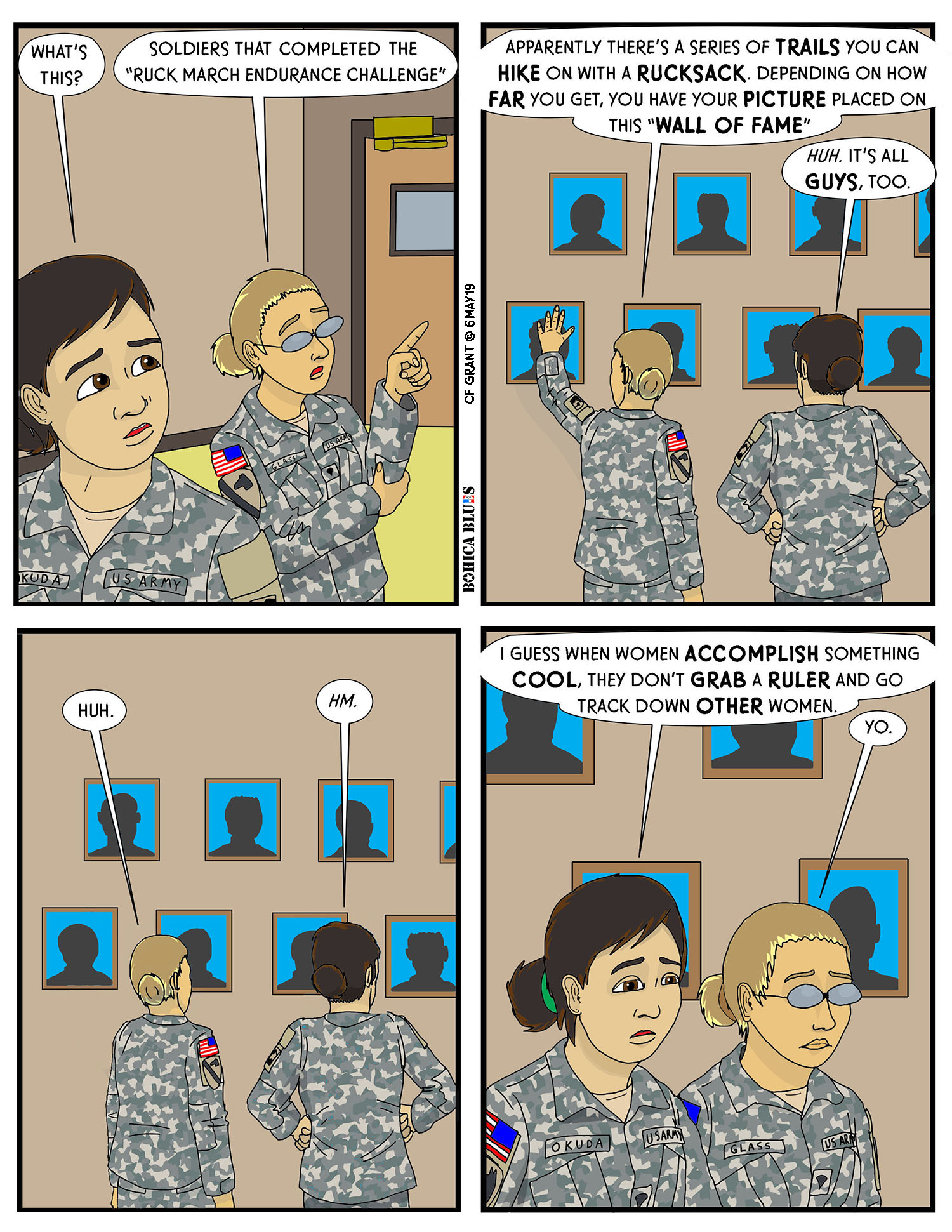 This conversation took place not at Fort Bliss in Texas, but rather Camp Williams, in Utah. I was there for some training recently and there is, in fact, a wall of photos of soldiers who had completed a “rucksack challenge march” of various phases. A “rucksack” is a sort of heavy-duty military backpack that carries (at a minimum) three days’ worth of supplies for living and fighting. It may also carry a bunch of other stuff as needed by the mission, such as cold weather gear, a radio, various electronic gear… and typically lots of ammunition, especially extra ammunition for a squad machinegun. It gets heavy once loaded, and the ability to carry a fully-loaded rucksack for several miles or more can be quite a challenge of endurance.

Anyhow, two female soldiers in my class saw this wall of photos and were discussing how it was all male soldiers, and no females. The conversation more or less went in the direction seen here, although it was a bit more drawn out and with more detail– I condensed it into a more deliverable punchline. I found the conversation amusing to overhear and knew as it was unfolding that a future comic was in the works.

Personally, I am not competitive in ways that are considered stereotypical of other men; I am not a big “trophy” collector but I do like to compete against standards that I set for myself– challenges for time or distance or ruggedness of hiking areas. Never one for team sports, I’ve always been into solo adventure challenges instead. I grew up in a neighborhood where there were no other kids my age and so besides art, long walks or bicycle rides were my norm. By the time I got to High School, I had no experience with team sports and so had not developed any interest in them– and the kids who did grow up playing team sports were far ahead of me in their abilities, so I would have had a pretty serious learning curve to catch up on if I’d wanted to.

Weirdly enough, as a solo day hiker, I might have done pretty well on the “ruck march challenge”. But at the same time, all that beer back home isn’t going to drink itself.