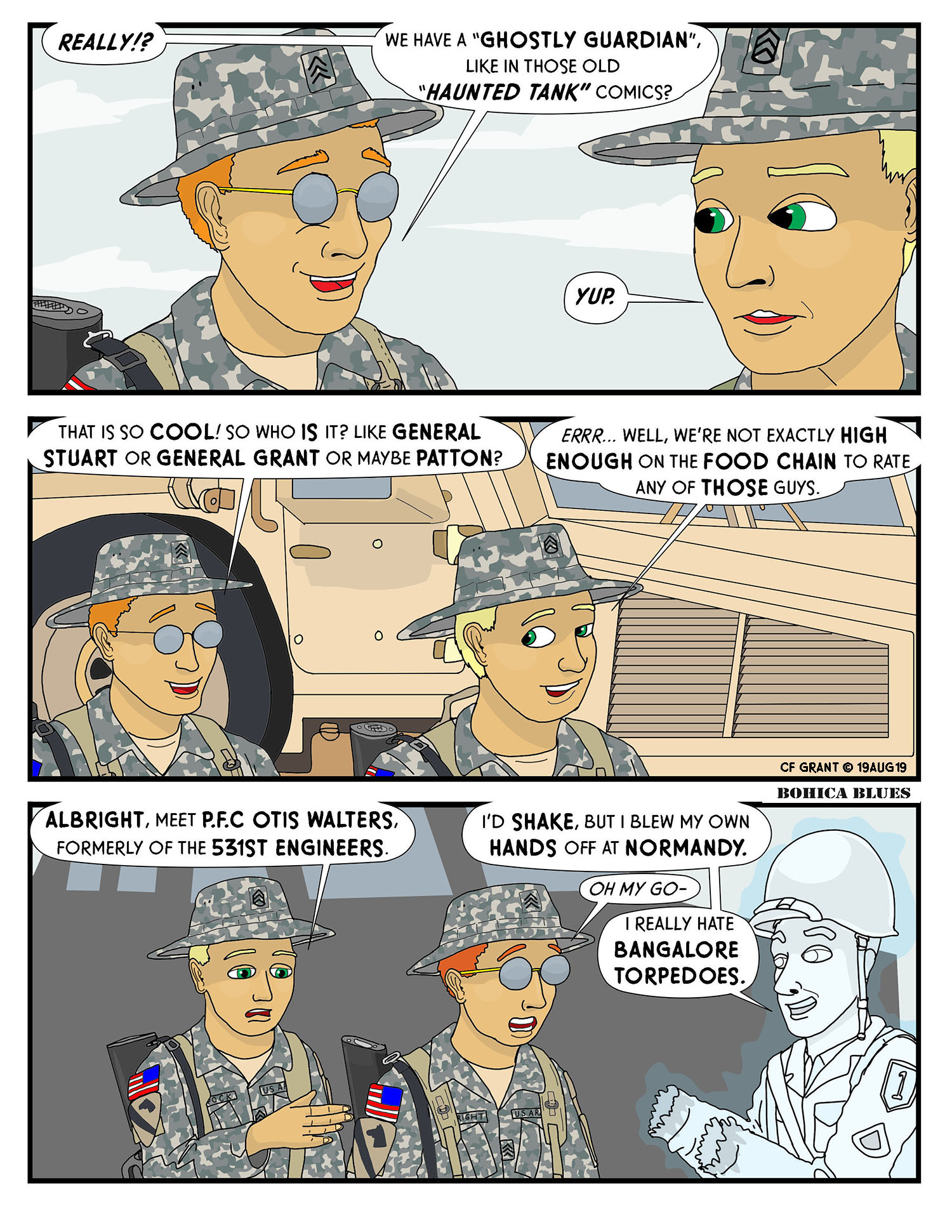 I have been wanting to do a “Haunted MRAP” type episode of some sort for a long time. People who heard my podcast interview on “Idaho Comics With Al Asker” know that the classic DC comic “The Haunted Tank” was a big motivator in my past. I had wondered how to fit in a ghostly guardian and make it “fit”; I contemplated historical figures and the like but wanted someone a bit less than famous. I toyed (briefly) with the idea of “SGT Rock” from the comic of the same name– “SGT Rock and the Combat-Happy Joes of Easy Company” was another famous DC war comic.

The connections are obvious: The World War Two character of Sergeant Rock along with the modern Sergeant Joe Rock who would be some sort of descendant. That would fit the motif of having a ghostly guardian with some sort of historical and familial connection.

Of course there are problems with that in the real world if I ever want to publish these comics and sell them (which I have started). That would make the entirety of this comic a sort of sequel to the SGT Rock comics of DC, with all the attendant copyright problems therewith. Besides, I didn’t think a Reserve Engineer unit from Boise Idaho would “rate” a top-name star like that; we tend to get the lower-level folks. For example, only recently have currently-relevant musical bands started adding Boise to their tours; typically Boise has hosted obscure garage bands on their way up, or former chart-toppers that are now on their way to becoming Las Vegas lounge acts.

So I came up with Otis Walters, an affable young farm boy that joined in World War Two only to have his fifteen minutes of glory be over all too soon through his own butterfingers fumbling. Bangalore Torpedoes are a real thing; they are tubes of explosive that are assembled and shoved into obstacles (generally barbed wire) and detonated, blowing away the wire and clearing a path. They can also be notoriously unforgiving when mishandled.

The 531st Engineers was a real unit that landed at Normandy, but Otis Walters (as far as I know) didn’t exist. I did not use any real person as a basis for him, I just made him up. He has an Idaho connection that will be revealed, which is why he is haunting our guys.

So this was the second comic I had mostly done when I had to put Sadie to rest; I finished this one and will probably just go to a Monday-Only schedule for the next couple weeks. It’s been a hard time for the whole family and we’re still adjusting to this sudden emotional hole in our lives.

Take care out there and watch out for one another.