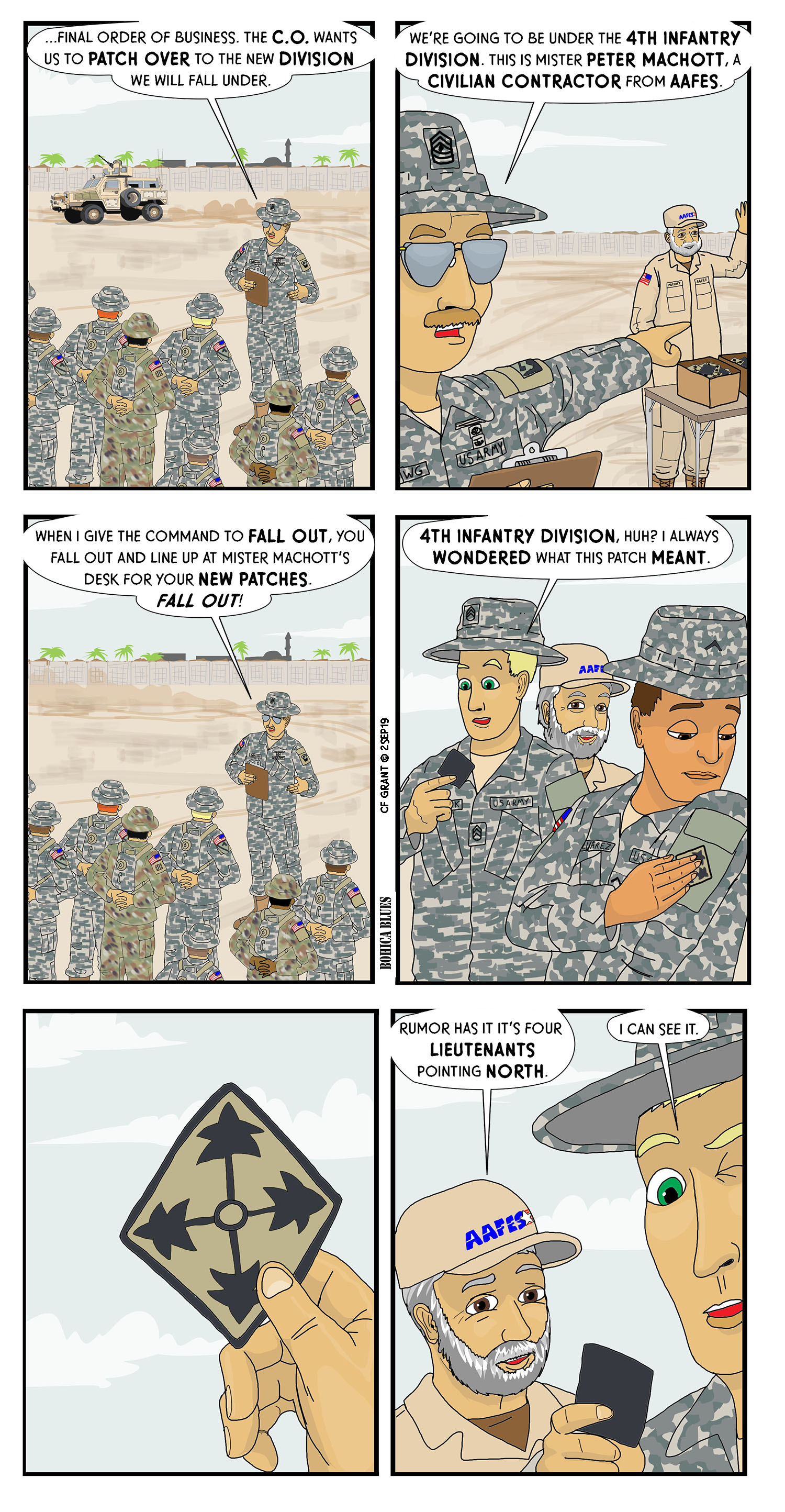 Every patch in the Army has some sort of meaning behind it; usually there’s the “official” meaning, recorded in the unit’s history, and then there’s the “unofficial” tale, passed down from soldier to soldier over the years.
I used the 4th Infantry Division because, when I first joined the Army way back in the day, that was where I was placed– the 1/12th Infantry at Fort Carson, Colorado. When I first started this comic I had the guys from the 213th deploy under the 1st Cavalry Division because that was the Division I deployed with in real life. So now I’ll give a shout out to my original Division, the 4th Infantry.
The number four in Roman numerals is “IV”, which is sometimes spelled out as “eye-vee”, which of course sounds like “Ivy”. So the 4th is sometimes called the “Ivy Division” and the patch has four ivy leaves on it. Why they all point in different directions I don’t remember (it was a long time ago) but I assume it has something to do with being able to move in any direction since we were a Mechanized Infantry unit and (theoretically) unhindered in our mobility. And stuff.
The “unofficial” story, of course, is that it represents four Lieutenants, each pointing to where they think north is.
But technically, if four Lieutenants are pointing north, at least one of them is right… you just have to figure out which one.
I understand the 1-12 Infantry Battalion is no longer in Fort Carson, Colorado, but is now in Fort Hood… ironically, with the 1st Cavalry Division, the guys I deployed with. So in a way that sort of represents a closing of the circle as well.
The strip also features Peter MacHott, someone being honored by a Patreon supporter. The real life Peter MacHott really was an AAFES contractor so this works out well. AAFES is the “American Armed Forces Exchange Service” and they run the post exchanges, or the “general stores” where troops can shop at like civilian shopping centers. Civilians working for AAFES really did deploy with us, and they did their best to see to it we had “morale items” (snacks, DVDs & other entertainment items, etc). They had to wear a uniform to make them stand out as people working for the American forces, since to be in civilian clothes with no markings meant the possibility of being charged as a spy if caught.
In real world news, this will be the lat week of “Monday only” strips; I will resume the regular Monday and Thursday schedule I normally keep. We will pick out some time and space to spread Sadie’s ashes sometime before Winter but for now I am ready to get back into a regular schedule with things. Thanks again to everyone for their support, it means a lot.