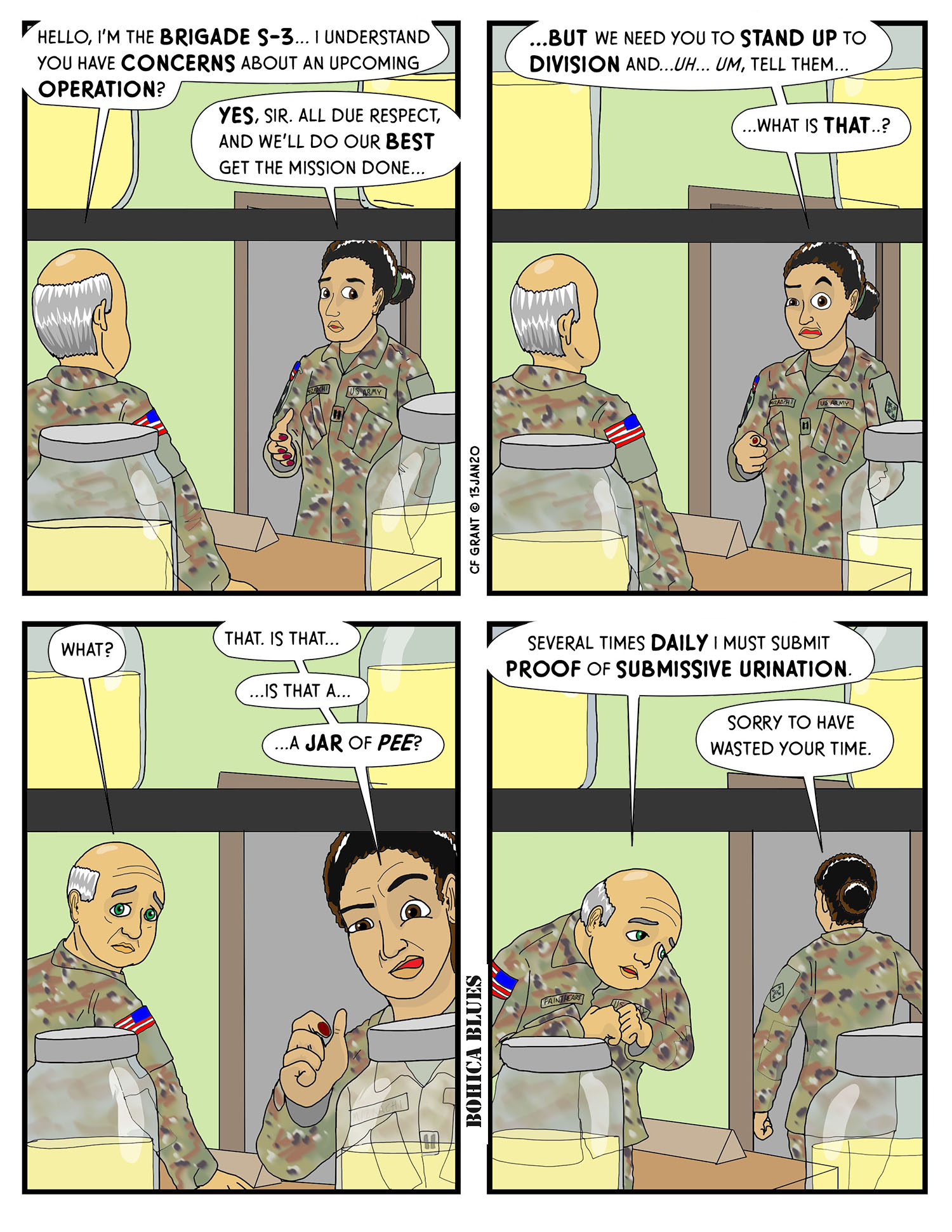 Have you ever had to deal with a person with authority or responsibility abuse their power? Probably so. But how about those that meekly sit by and refuse to speak up on behalf of someone, even though they have the ability to get the attention of someone as part of their normal duties? It can be just as maddening.

In some canines, there is behavior known as “submissive urination”. According to the Humane Society, it is a behavior of some young puppies to roll over on their backs and urinate as a way to display that they are submissive to a dominant dog. They usually outgrow the behavior over time. But I swear sometimes there are humans out there that have adapted to this display of obedience.

I knew one senior NCO who was an absolute vein-popping bull-necked hell-raiser when it came time to chew out a subordinate. He’d huff and puff and move mountains of paperwork, and the lower the rank of the person he was confronting the more blustery he got. He completely destroyed the morale of a young E-4 that had difficulties adjusting to life after returning to Iraq; he just decided this poor guy was going to be the focus of his monthly avalanche even though he was trying his best to keep his head screwed on straight in the face of some pretty serious PTSD. There was little I could do but I referred him to some medical professionals to see about getting him some benefits and perhaps even a discharge. The senior NCO just wanted to punish, punish, punish.

Of course, when higher-ups contacted us about tasks that were either out of our wheelhouse or expecting sudden unrealistic miracles to be pulled out of thin air, guess who was the first guy to roll over and submit to their every whim? That same senior NCO would practically debase himself at the whim of anyone senior. It was almost embarrassing to watch. So to me, people who do nothing are pretty much just as bad as leaders who are either toxic or, as we see in the comic, dangerously clueless.

In the comic, the characters have been given a task in which the higher-ups don’t fully appreciate the troublesome realities of the situation. Two Engineer companies, one of which is in training, will be in dangerous reach of some insurgent combat cells. But when asked to intervene, or at least speak up and ask for a reconsideration of the situation, the Brigade Operations officer just doesn’t have the fortitude because he is already “broken” and submissive to the every whim of his higher-ups.