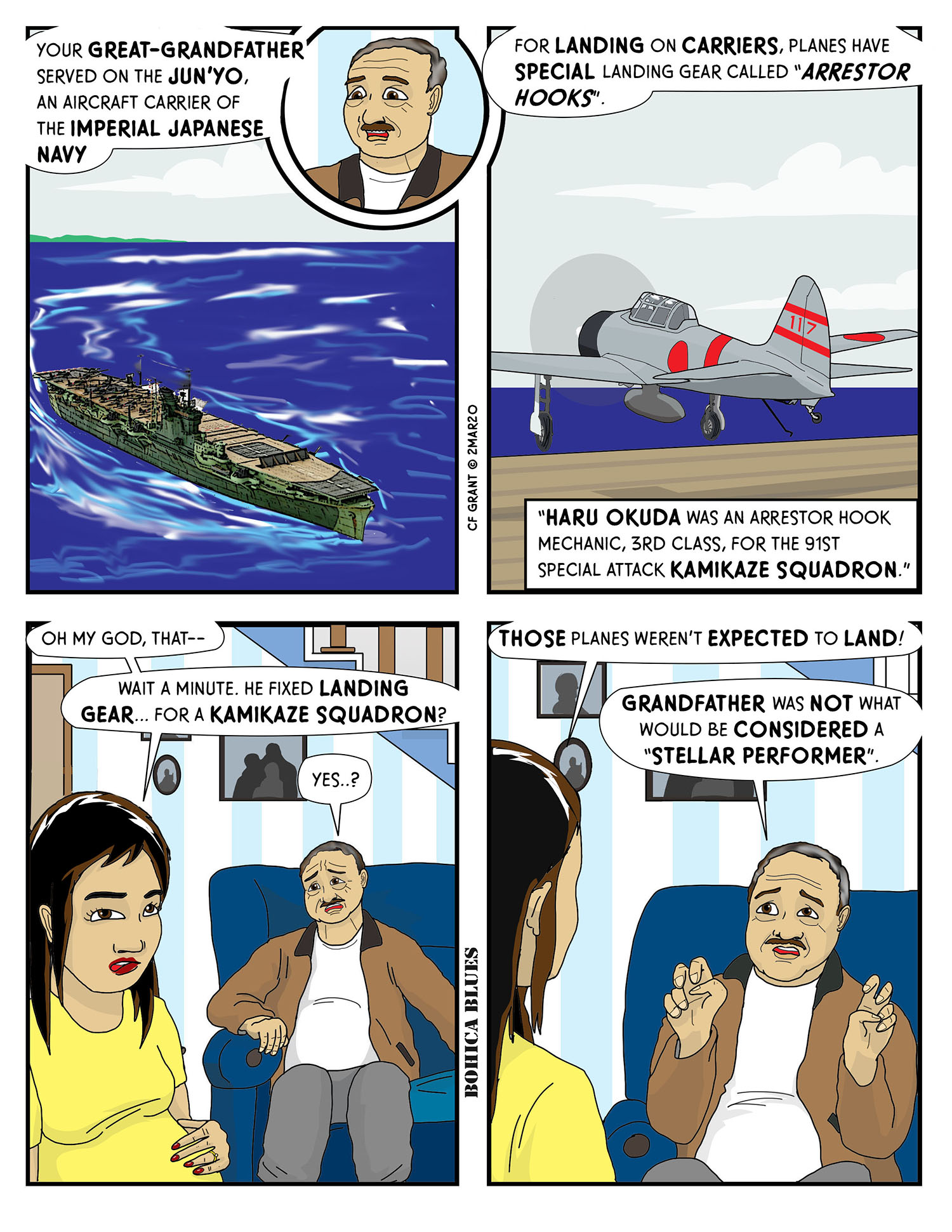 When I first started making BOHICA Blues, I had all kinds of characters thrown in. Native American, African-American, Jewish, and so on. I also had an Asian woman, last name of “Okuda”. That was all I had put into the development of her character. I think the name “Okuda” stuck in my mind because of the set designers for the Star Trek TV show was named “Okuda”, and he made all those glowy computer touchscreens that were all over the bridge of the Enterprise. Since then, glowy touchscreens were called “Okudagrams”. It was a bit of trivia that stuck in my head for some reason, so I used the name for the character. It is also a fairly common Japanese name.

When I re-launched BOHICA Blues as a full-color webcomic, I decided that the “Asian female” character was going to be Korean, however, I reflexively kept the name “Okuda” and waved it away as her being from Hawai’i, which has immigrants from all over Asia. But as she became a more central character, I came up with a backstory to explain the Korean heritage with the Japanese name.

Which caused me to think about what her grandparents might have been doing during World War Two. Obviously, a young man would be expected to participate, but I didn’t want to saddle her character with a problematic history. So I asked myself, “What was one of the most useless job a servicemember could do in the Imperial era armed forces?” and I thought, “a guy who fixes kamikaze landing gear”. So it was done.

The Jun’yo was a real ship, too; it was under construction to be a passenger liner when the war started, and the Navy took it over to complete its construction as an aircraft carrier. Because it had little to no real armor to speak of, it was supposed to be kept out of major fights. It had a brief moment of minor glory during the attack on the Aleutians –the Dutch Harbor raid– but it wasn’t until the “main” carriers were lost at Midway that it was pressed into front line service, where it performed adequately but without any particular distinction. It spent the last year of the war damaged and in dock under constant repair until the surrender.