The Other Dog’s Bone 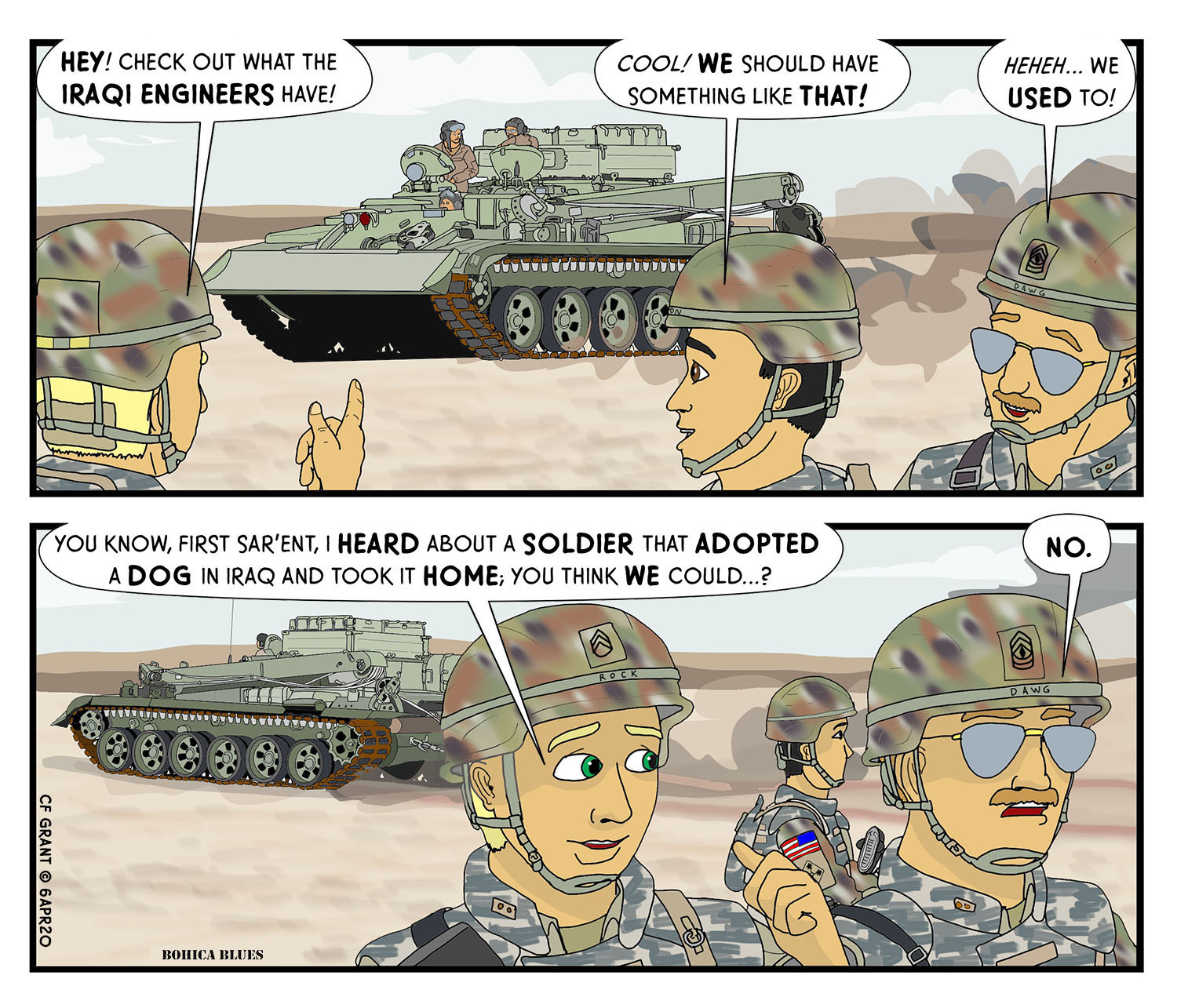 The Other Dog’s Bone

There was an old parable –I think it was ancient Greek but maybe not– about a dog that had a bone. He was carrying his bone, all proud of it, and walked by a pond. In the reflection of the pond, he saw another dog (his own reflection) that also had a bone. The “other dog’s bone” was just as big and tasty-looking as his own, and he wanted that bone as well as the one in his mouth. He growled at the other dog, but the other dog simply growled back as well. The he started to bark at the other dog, but as soon as he opened his mouth to bark, the bone he had fell into the water and disappeared. Now he had neither bone.

Combat Engineers get to use some unusual equipment, and all around the world different modifications are made to armored vehicles to adapt them to this need. The US Army used to have a cool vehicle called the “M728 CEV” or “Combat Engineer Vehicle”. It was a tank modified with a crane and a bulldozer style blade in the front and a short, stubby gun that fired particular types of shells; I’ll go into some detail in the next comic. The vehicle was versatile and popular with their crews but it was taken out of service and replaced by a variety of other vehicles, none of which are really quite as capable or specialized. In truth the CEV was too slow to keep up with modern tanks and armored personnel carriers, and spare parts were increasingly expensive.

The vehicle shown in the comic is real; it is a BREM-1 Combat Engineering and Recovery Vehicle and I believe it is made in the Ukraine. I don’t know for certain if the Iraqis have any of them but I am going to give myself a minor cheat code and say that they do. Even of they don’t have exactly that, they may have something similar. The guys in the 213th are a bit jealous, because most of them joined the Army after the “glory days” of the CEV, or Combat Engineer Vehicle, that the US Army used to have.

So the people that need to learn the lesson about the envious dog who lost his bone aren’t the regular soldiers like our characters here; they know things could be better. The people that need to learn the lesson about being glad with what they have are the higher-ups that make the decisions, and retired the vehicles without a plan for replacing them. The BREM-1 shown in the comic isn’t actually as tough or as powerful as the old CEV was, but it’s better than nothing at all. There is talk of a new type of replacement being made based on the M1 tank, but the replacement process is slow and could still be canceled at any moment by any change in the political winds (most likely having to do with budgets).

Oh, and as an aside– people notice I’ve been drawing my characters downrange a lot recently, in a dangerous area. Veterans may wonder why I draw the characters bunched up when in reality, they would stay further apart– the military had “social distance” down before it became a thing. In a danger zone, we spread out and stand away from each other so that a single explosion (mine, mortar, grenade, etc) doesn’t kill or injure more than one person. It used to bother me in Hollywood that they would routinely show soldiers bunched up, having conversations.

But as I have drawn troops in action for years now, even for a comedy, I understand the reasons why they take these shortcuts at the expense of realism– to carry out a story, you have to show the characters interacting and having dialogue, to maintain the pace of the plot or character development. Showing people spaced out realistically would mean either a lot of wide-angle shots, making the individual characters difficult to tell apart (since they’re all dressed the same); or a whole bunch of frames of individual heads and faces talking back and forth, making it disjointed and harder to follow. Showing a few troops clustered together for a moment allows me to carry out the dialogue quickly and making it clear who is talking and being responded to, even if it means things aren’t as realistic.

You know, realism, in a comic with ghosts and dogs playing Dungeons & Dragons.

Anyhow, stay safe and until next time!