Tales of the Before Times 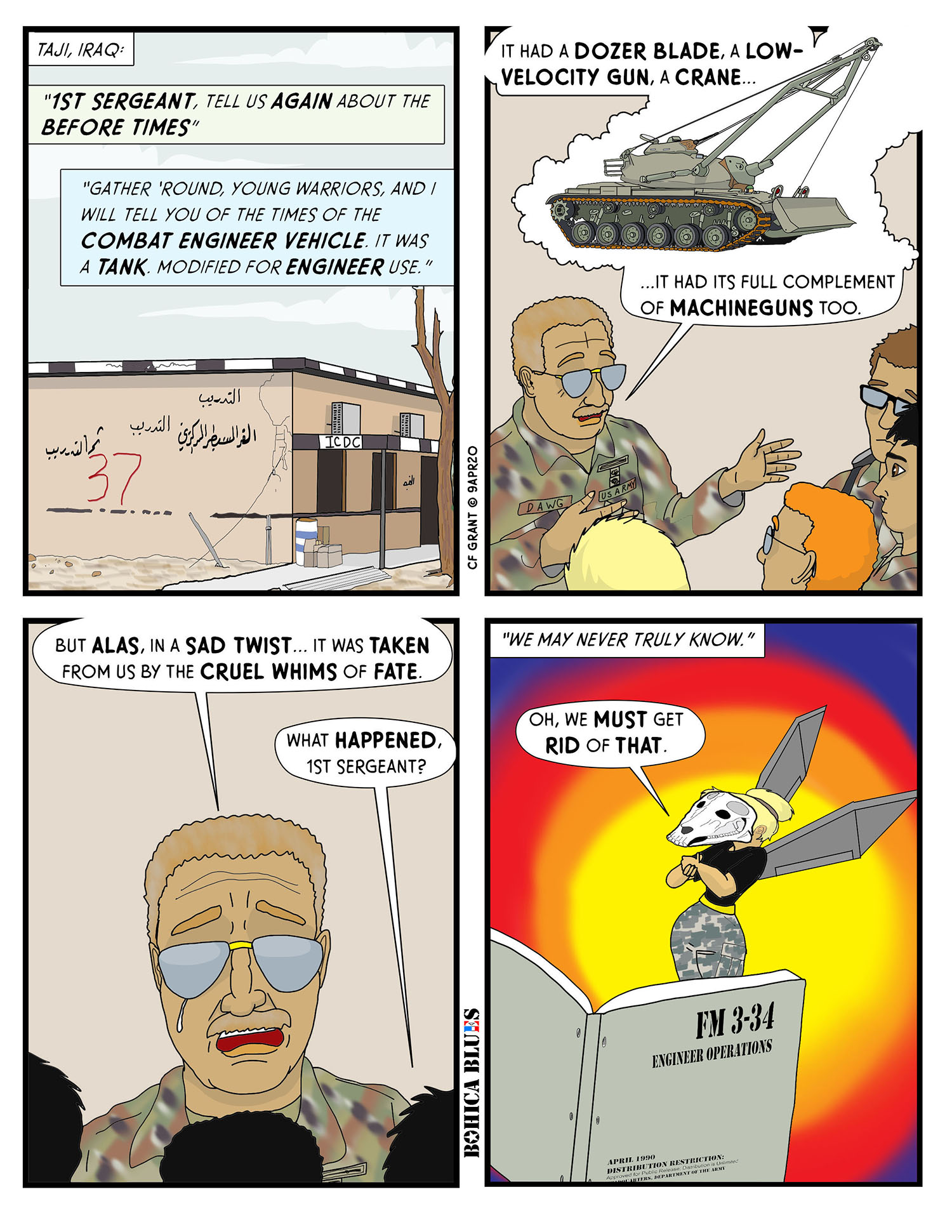 Tales of the Before Times

There’s still a lot of old Engineers that tear up a bit as they remember the long-past days of the CEV, or Combat Engineer Vehicle. It gave an Engineer company some pretty serious firepower, and even Infantry that worked with Engineers a lot liked having the CEV around. The short, stubby cannon fired a type of shell called HEP, or High Explosive, Plastic (I’ve also heard it called a HESH round, for High Explosive, Squash Head). It is what it sounds like, a giant bullet made of a sort of plastic explosive that you could fire right at a target, covering a section of it in plastic explosive before detonating (or so I’ve heard; I’ve never seen one in action because it was gone from the inventory before I showed up).

But the biggest problem with the CEV was in a way the same thing that made it so cool: it was based on a tank chassis, or specifically the M60 tank chassis. The M60 was a tough old tank but it had seen its heyday in the 1970’s and in the 1980’s they began replacing it with the M1 tank. The M1 was newer, slightly smaller, had better armor, but most of all it was much faster. The CEV could no longer keep up. It was retired without a replacement. Oddly enough, the Combat Engineers were still using M113 Armored Personnel Carriers, which were companions to the M60, but no one seemed to care that regular Engineers couldn’t keep up either– the same goes for the Bridging Tanks, which to this day are still largely based on M60 tank chassis.

So it sounds like a Good Idea Fairy of some sort struck again. As you can see in the last panel, she is reading Field Manual, or FM, 3-34 which about Engineer Operations (not to be confused with the FM 5-34, which is Engineer Field Data) from 1990 and about to strike. By 1990 I seem to recall the CEV was in the process of being removed from the inventory, although in truth the decision was probably made before that.

Someday, perhaps, a replacement will be added to the ranks of the Combat Engineer forces, and we shall see what it brings to the table. Until then, the CEV is gone and fading from memory, its one brief moment of glory in the public eye being the use of one to smash down a wall in Waco, Texas, during the siege against the Branch Davidian Compound in 1993. Let’s hope our replacement for the CEV becomes known for better things… when it eventually arrives.