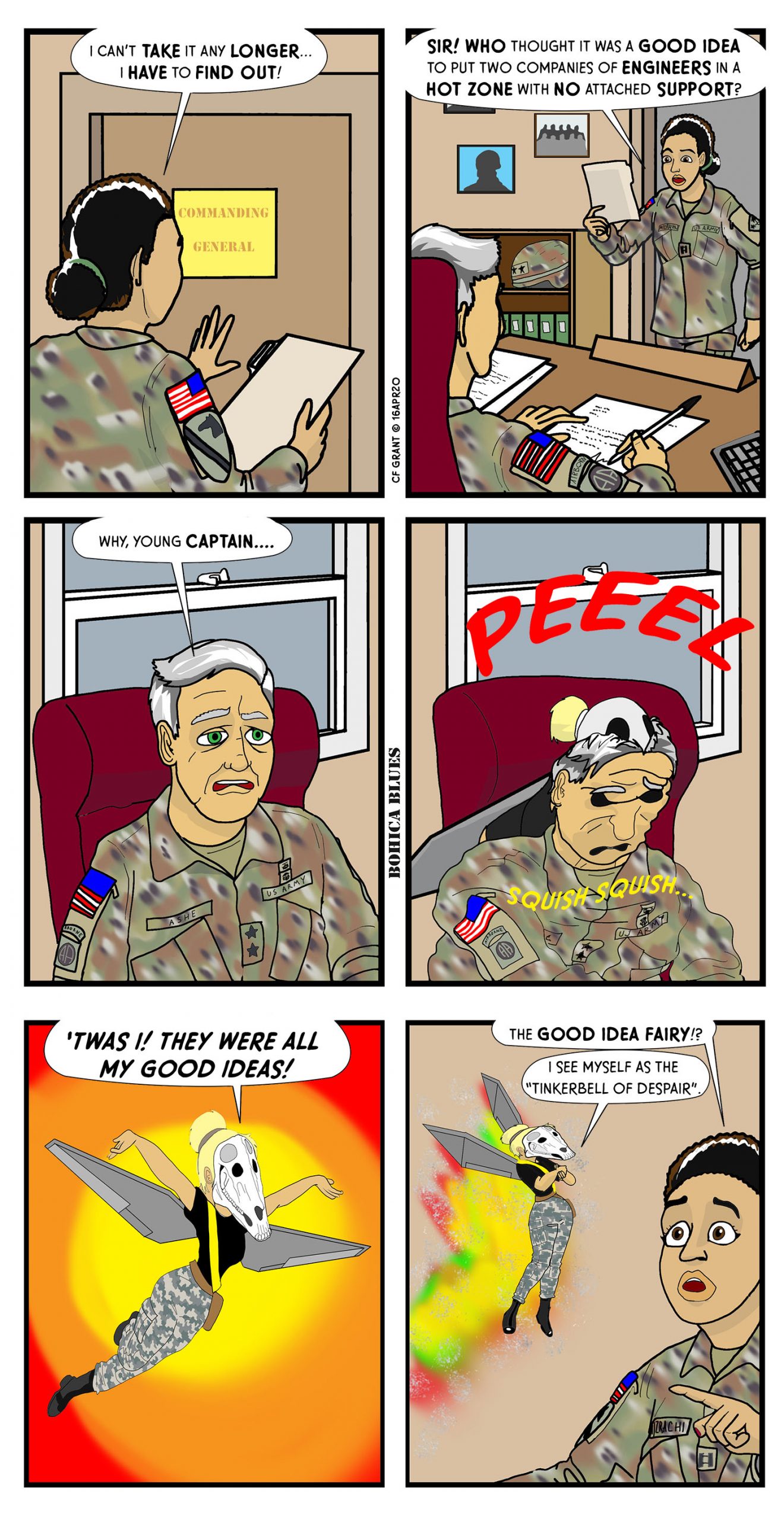 I’ve been looking forward to this one for quite some time– revealing to everyone that the Good Idea Fairy has been behind pretty much everything (and has, in fact, been in command) from day one.

I don’t know what it is about being in charge that gives people the notion that they should push idiot ideas down to the masses. This happens as much in the civilian world as it does in the military, but in the civilian world there are usually more options to deal with it (in a worst-case scenario, you can quit a job whereas in the military, that’s a little more difficult). I think at all stages of leadership, or supervisory or management positions, one should always be asking, “is this *really* a good idea? Does it actually apply to our working conditions here? Does it actually address a problem? Or was this something that makes sense when applied to the organization higher up, but isn’t really applicable or practical for lower-echelons?”

Just about every organization likes one-size-fits-all ideas because they are easy and, if you have to order new equipment, cheaper to buy in bulk. Customization is hard and can be expensive. In circumstances like that I can kinda understand when a Reserve or Guard unit has to implement a policy clearly designed for Active-Duty units (even though it is frustrating). For example, for a long time there was a requirement to log into computer networks with your credentials every 30 days or lose computer access. Easy in Active Duty; but sometimes a Reserve or Guard unit might have a drill weekend at the beginning of one month, and then won’t have the next drill weekend until the end of the next month: 45 days or more apart, thus guaranteeing that on that second month, most of drill will be taken up with getting people’s computer credentials re-activated.

Same goes for equipment. I work at a job that sometimes has to process mail to send out. Our “big offices” in places like San Diego, Miami, and New York send out thousands of pieces of mail a day. In Boise, though, we send out maybe a dozen on the average. But the higher-ups gave every office the same $1000.00+ dollar mail processing machines that chunk out postage-printed envelopes at machinegun speed. For our small office, it cost more to fire up this big, expensive, power-hungry machine with hundreds of moving parts than the postage itself was worth (eventually it got replaced).

But we’ve also all seen higher-ups who just acquiesce to *anything* cooked up by their highers, apparently with absolute trust in the hierarchy to do what is right. I’ve dealt with leaders and managers who just seem to feel that “those people must be ‘better’ somehow, otherwise they wouldn’t be in those positions!” and go along with whatever those people cook up. If you’re one of those managers or leaders, I have a warning for you– if all you do is pass along message from command, then you can be replaced by e-mail.

In the comic, the Good Idea Fairy was “piloting” a sort of human suit that I named “General Ashe”. General Ashe doesn’t actually exist as far as I know; I never met anyone like him or with that name. I just needed a name for the uniform, and I thought of Ash, the biomechanical robot from the first “Alien” movie that was a secret Company agent, and carried out the “good idea” of violating ship’s quarantine to bring in an infected crewman who was implanted with the deadly alien embryo.

The next comic will explore a bit of the Good Idea Fairy and the role she plays. In the meantime, the possibility exists that BOHICA Blues may switch to a new webhost fairly soon and if that happens there may be another day of delay or something. I’ll try to keep everyone appraised. In the meantime, maybe share a story about the role the Good Idea Fairy seemed to play in your life, military or civilian, that was frustrating and clearly not thought out by the higher echelons of your organization.