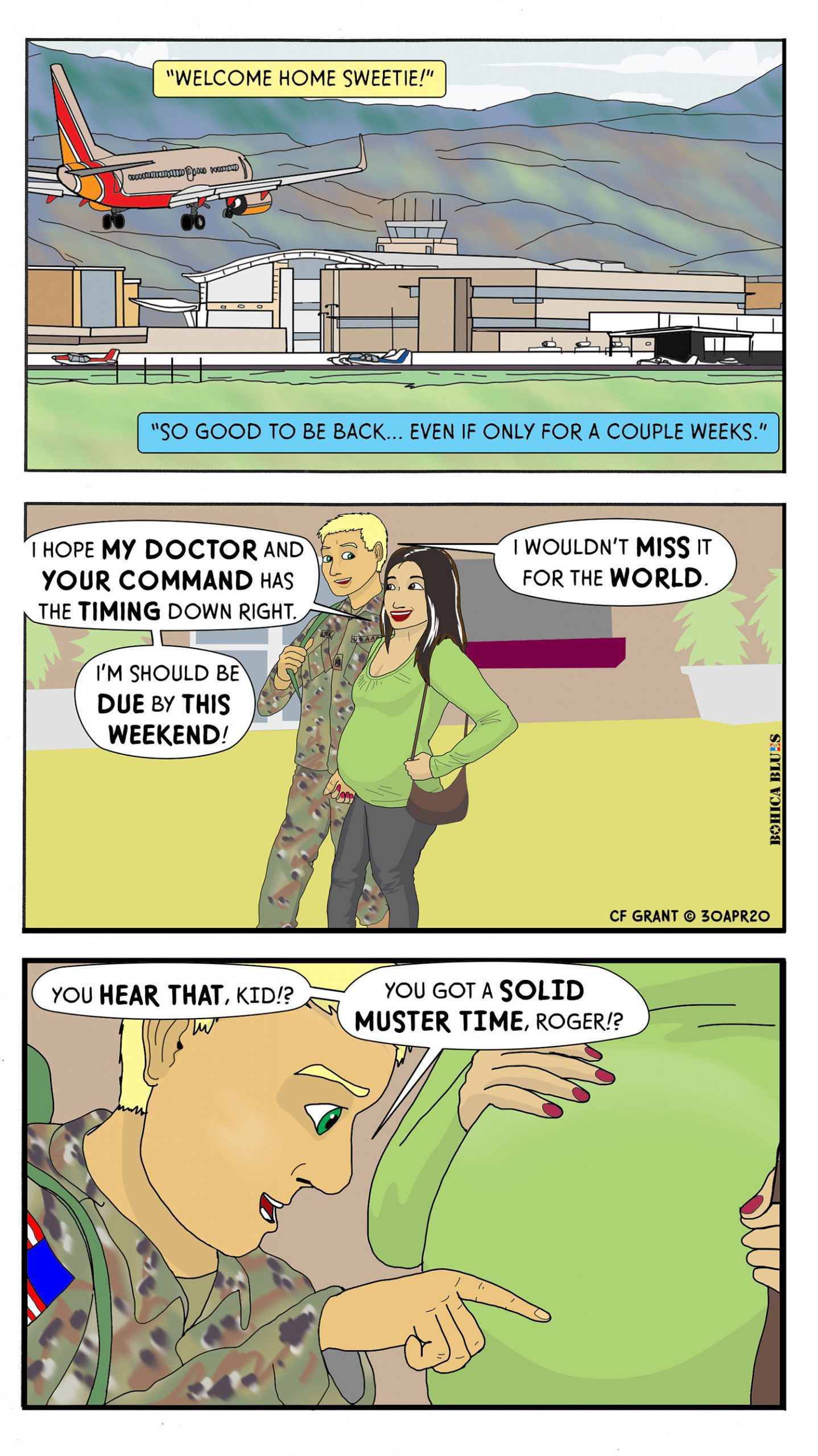 For major life events such as having a new baby, your command generally will make an effort to match up your leave rotation with the planned event as best they can. True, the needs of the Army technically take precedence, but they know that this is important for morale purposes. Of course, predicting dates for delivery isn’t always exact, but that’s not something the Army has any influence over– once the doctor gives you a best estimate, and you pass that information off to your command, then efforts will be made. Of course there are times when a new baby is born just before the soldier comes home, and… times when the baby comes shortly after leave is over and the soldier is already gone back.

In the 213th Battalion’s first deployment to Iraq, Joe was one of the first people to rotate home on leave. Now, he’s one of the last. Joe and Juni got married (and Juni got pregnant) just a few weeks before Joe left, so after nine months, the unit is already about 2/3rds of the way done with their deployment. So while Joe had to wait a long time to go home, he has the good fortune of knowing that not only does he get the chance to see his new kid, but when he does have to go back, he’ll only have about three more months to go before coming home for good (barring the potential for extensions, of course).

A lot of times in the Army, it is customary to let young Enlisted soldiers get in line for things first, such as chow. Partially it is a sign of being decent to the troops, since they put up with the hard work, and especially in the field you want to make sure the troops eat first before the N.C.O’s (the sergeants) and then the officers. Troops usually have work that they need to be getting back to soon as well.

However, when I was deployed myself, I was about halfway through the deployment and a recently-promoted Staff-Sergeant when I came up on leave. I briefly wondered why myself and a few other NCOs and even officers were experiencing leave rotations before many of the junior enlisted soldiers had their chance to go home. It only took a bit of thinking for me to realize that you don’t want to let all the junior troops go on leave first, then have all your NCOs, and officers –all the leadership– rush for leave at about the same time towards the end of the deployment. You want to spread out the rotations among all ranks so there are no large gaps in personnel at any one level of the organization. SO for me in the real world, this meant taking leave at the midpoint, however for Joe Rock, he gets put on the end of the rotation with the hope that this will conveniently match up with Juni’s delivery date.

There’s a lot of complex working that goes into just planning leave rotations under such circumstances, and the personnel office has to factor in family and civilian needs as well as the unit’s convenience. I don’t envy them their work.