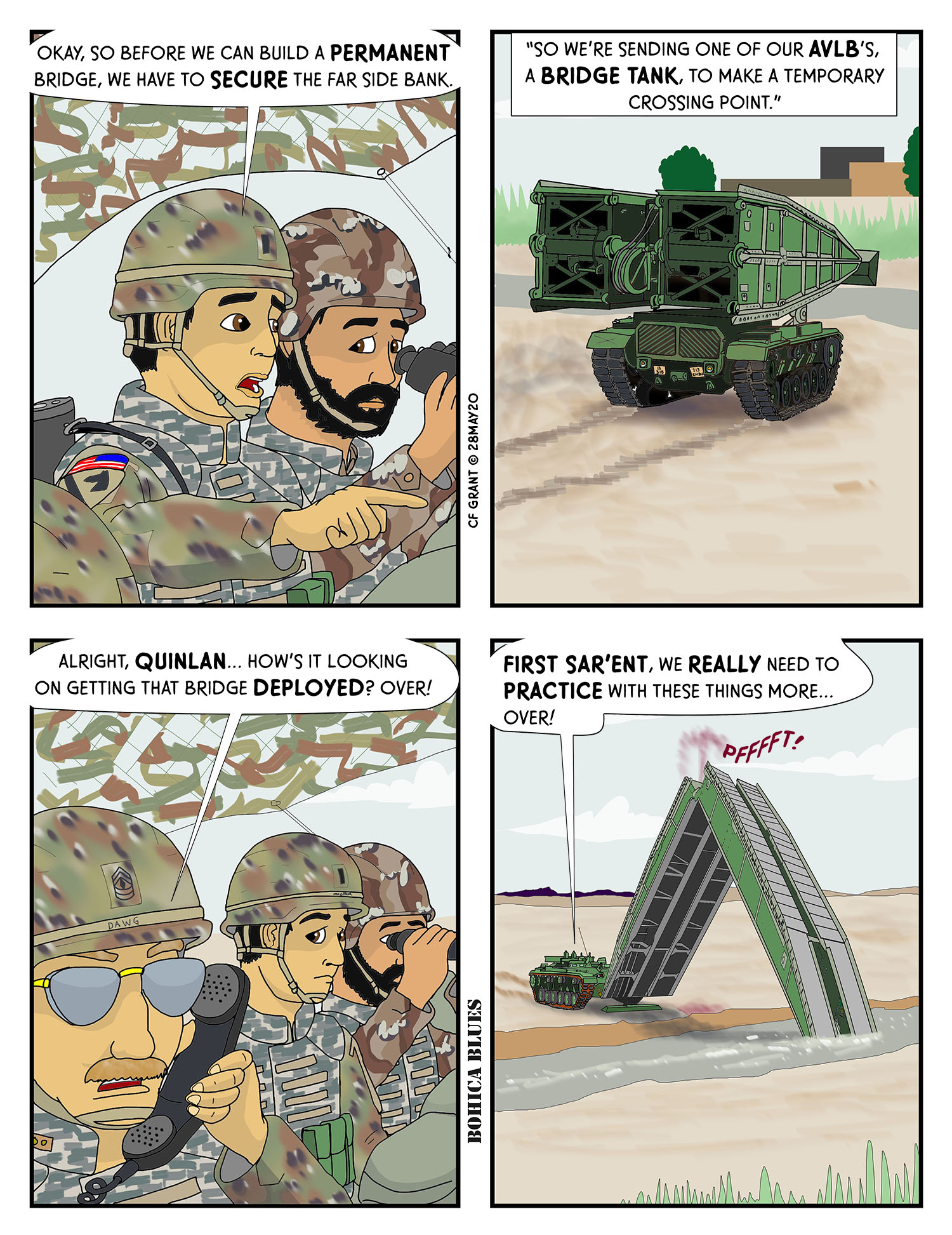 One thing we had at my real-life Engineer unit was AVLB’s, or Bridge Tanks. AVLB stands for Armored Vehicle-Launched Bridge, and they are what you see: a folding metal bridge that is deployed from the back of an armored vehicle. The vehicles themselves are frequently old M60 tanks with the turrets removed and a bridge launch assembly put on them, although I believe there are newer versions based on M1 tank chassis.

Quite awhile ago I had a comic in which Captain Mizrachi showed up and Sergeant Rock was showing her around the different Engineering vehicles in the motor pool– one of those vehicles was the AVLB, and he said “the Devil is in the details” of its vast machinery. The AVLB’s need to be “exercised” frequently (the exact term used by one of the guys I knew trained on them) which meant that the bridges had to be deployed , folded out and folded back, somewhat regularly. Otherwise, I guess, things like hydraulic hoses and cables and such develop permanent bends in them and they become unreliable. As you can imagine, though, exercising a large folding bridge like that takes a lot of space, so it isn’t always practical. An entire row of motor pool parking, where a dozen vehicles could have been kept, had to be cleared out just for one bridge to be laid flat.

One of the strange things about it all was how little training most of us got on these things. A few people got trained on them to an extent, but even though fast combat bridging is one of the Combat Engineer’s bread & butter, we actually never got enough crews trained on them to support all the bridge tanks we had. We had maybe a couple of crews and they would work their way from vehicle to vehicle, performing maintenance and tests on them as needed. For most of us, the AVLBs were just curiosities that sat at the far end of the motor pool.

So it would come as no surprise that, when an AVLB is finally needed for real, it is like a piece of alien technology (primitive alien technology, I admit) that is unusual to operate and probably has unforeseen maintenance issues, failing when needed the most. I also wanted to do something to tie the comic back to one of the original images used to promote BOHICA Blues, the very first “launch day” comic from 2013, in which an AVLB fails partway across a river, plunging the far end of the intended bridge into the muck and silt.