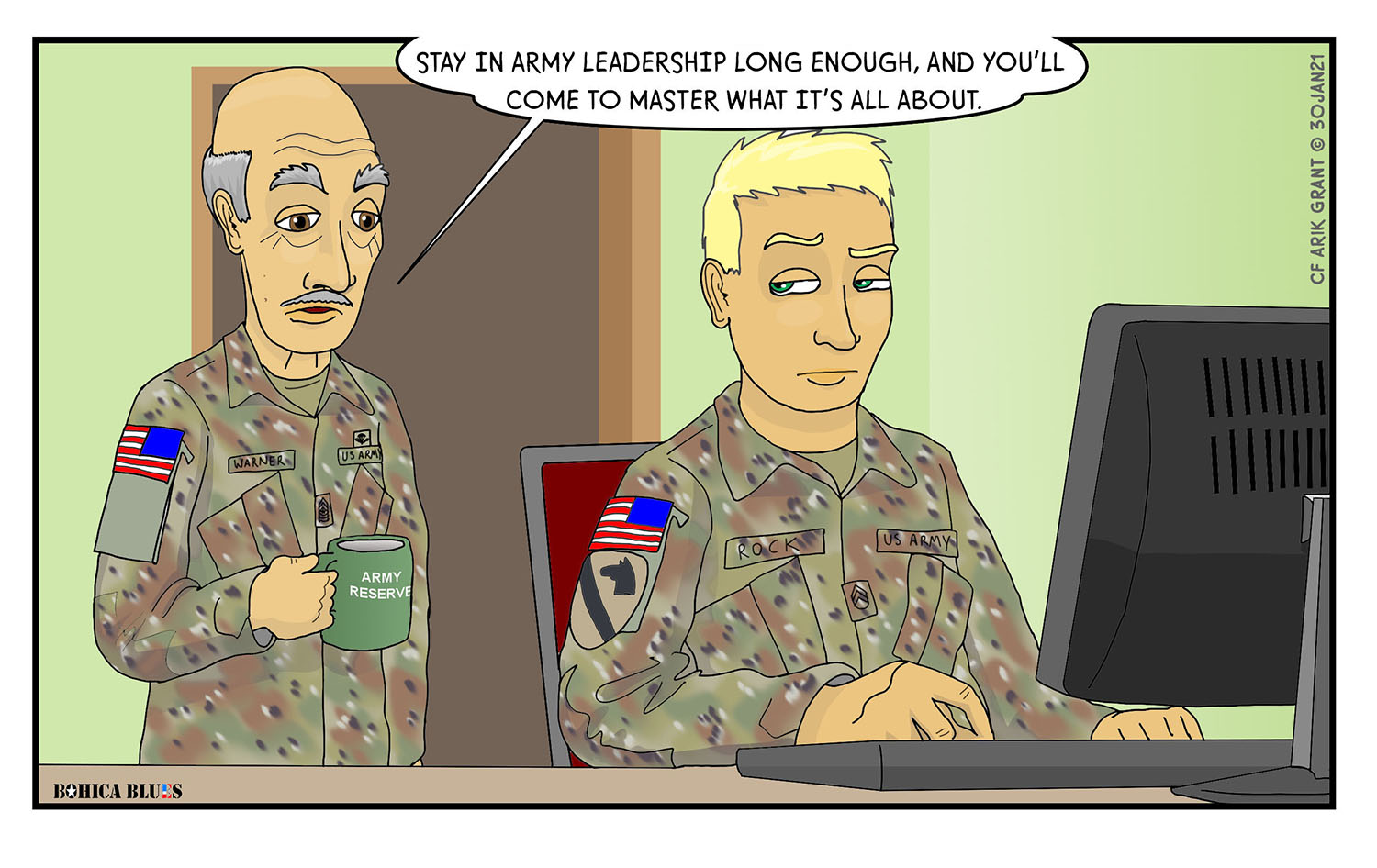 This one addresses a kind of potentially sensitive subject, one that’s caused some controversy in Army circles the last few years. It is the difference between the soldiers who have been combat deployed, and the “slick sleeves”.

If you look at Joe’s uniform, you’ll see his right sleeve has a patch on it; a sort of rounded triangle with a horse’s head and a diagonal bar. Long-time readers and military personnel will know that for what it is, but for new readers that is the arm patch of the 1st Cavalry Division, and the reason Joe wears that patch there is because he was deployed to Iraq with that 1st Cavalry Division. Ever since deploying to combat with them, he gets to wear that patch in his right sleeve.

Anyone who has deployed to combat with a unit gets to wear the patch of that unit on their right sleeve. The left sleeve is where you put the patch of whatever unit you’re currently assigned to. If you switch to a new unit, you remove the left patch and replace it with the new one… but the right combat-unit patch stays with you forever.

These days there are a lot of soldiers who have been deployed to combat theaters around the world, and they come back with patches on their right sleeves. Bear in mind that the whole purpose of a military is to perform in combat; if war did not exist we would not need militaries. So, someone who has been deployed to combat has taken part in the military’s primary purpose for existence.

For a lot of people who’ve been deployed to combat, everything else in the military that doesn’t directly support that goal feels like busywork.
And so there’s a tension between those who have (combat patch vets) and those who haven’t (“slick sleeves”), when a task or directive comes up that can seem like a waste of time. Especially when a junior soldier who has been to war is being told to do something time-wasting and frustrating by a leader who has not been to war; there’s a sense that the person in leadership has attained their position though meaningless displays of ticket-punching or “dog-and-pony shows” that has left them without perspective on the realities of combat.

Some Army leaders have proposed doing away with the “combat patch” tradition and changing the regulations so that everyone is a “slick sleeve”, but so far those proposals have had little traction.

From time to time I admit having frustrated reactions when I encounter orders or directives that feel like they were cooked up by Good Idea Fairy committees. Having a “slick sleeve” trying to tell me about the “realities of the Army” in an unironic way has caused me to clench my jaw and bite my tongue from time to time. I don’t think anyone’s immune; fortunately I have this outlet to give myself (and hopefully others) voice.

But that said, I have to go back and look at the Army as a whole, the institution from the ground up. I also have to remember that once upon a time, I, too, was a “slick sleeve” yet still felt like I had learned a lot of useful things. My knowledge then was valuable and not to be dismissed, even though for the most part my training was just that –training; not practical experience– but it gave me a foundation of knowledge and familiarity that allowed me to build towards skills that kept me alive and focused in the real deal.

The things we learn as “slick sleeves” keep us on the rails when the real thing comes along. Training, book learning, doctrine, and theory are all we have as an institution when wars are not being fought. Right now we’ve had a lot of wars but there will probably come another time when wars are rare, and we will (hopefully) incorporate what we’ve learned now to teach the future generations of “slick sleeves” so that they will be better prepared when the real thing happens again.

And maybe one day our descendants will wake up and realize that they’ve all been “slick sleeves” for generations, and at that point we’ll realize that we’ve actually been successful.