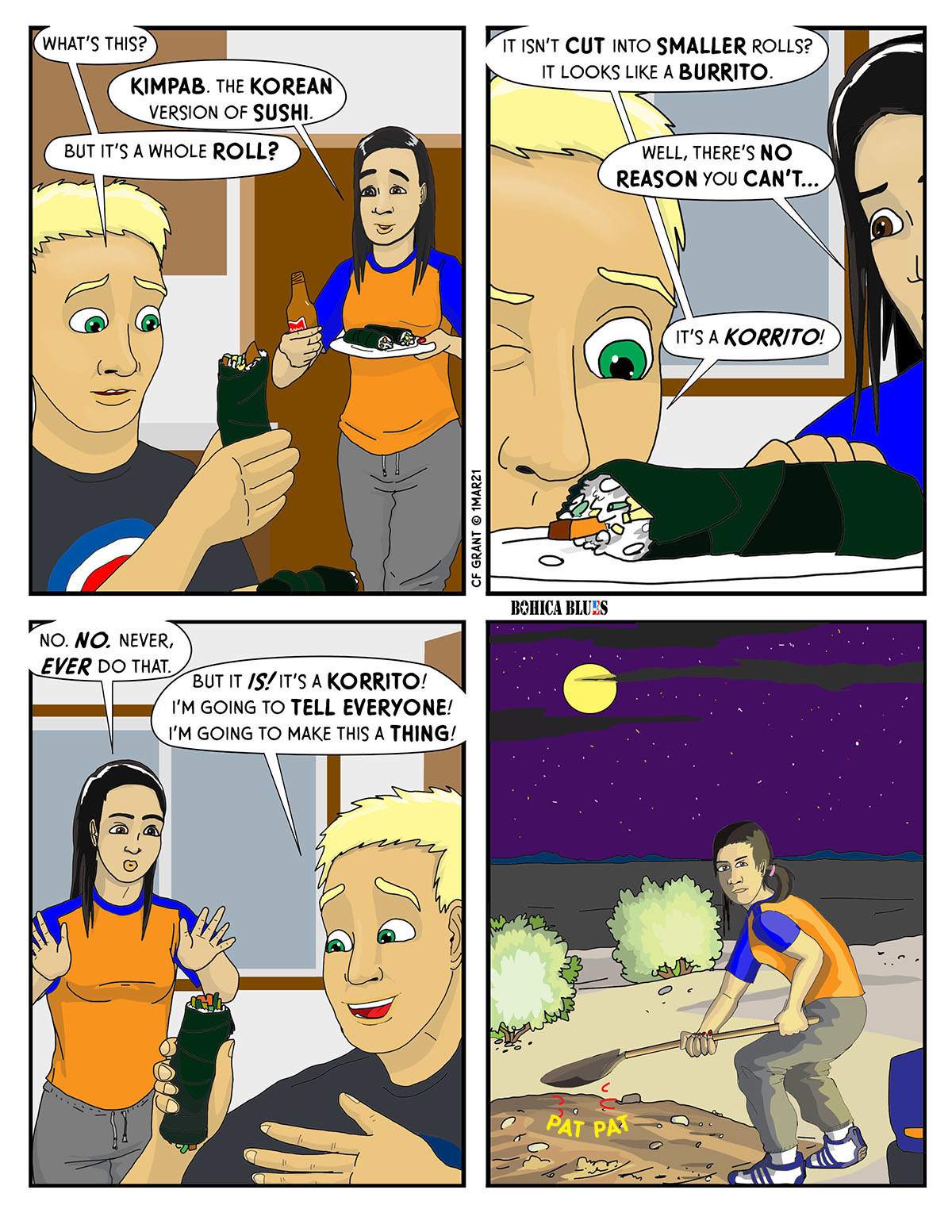 When I first heard about sushi, I was one of those people who was put off by the idea. “What?” I’d ask, “Raw fish! Ew!” Of course that was just my reaction born of ignorance and unfamiliarity; thankfully things like that can be cured. By the time I was in my early 20’s, I was enjoying sushi regularly.

Later I discovered a couple of things about sushi that hadn’t occurred to me: one was that those little rolls I was familiar with were originally large, log-like rolls that were sliced into thin pieces. The other was that sushi, from Japan, had a counterpart in Korea called “Kimpab” (or sometimes, more like “Kimpob” or “Kimbop”– Korean letters being different from English letters, the transliterations sometimes end up going in different directions).

“Korean Sushi” –“Kimpab” the way Juni pronounces it here– also has a lot of different ingredients besides fish. But I also see it more frequently served “unsliced log style”, whereas I can’t recall ever seeing Japanese-style sushi served that way (maybe I don’t go to the right places?). So Joe gets his first-ever “log o’ kimpab” and he compares it to the first thing that comes to mind: another wrap of goodies known as the burrito.

Now, as far as Mexican food goes, a lot of us love tacos (I am one of them) but for some reason what I latched on to as a kid was the burrito. I love burritos (the name literally just means “little burro”) and it has given me an appreciation for foods eaten as wraps. Burritos from Mexico; in the Middle East (particularly Israel) I learned to love the “Laffa”, which is a sort of super shwarma in a big pita-bread style wrap. And the French crepe, or course.

In a past comic, Juni introduced Joe to the crepe, which he had not seen before. To Juni’s dismay, he immediately drew a comparison between the crepe and burrito, referring to the crepe as “the French burrito… or perhaps it’s the ‘beurriteaux’.” Now he does it again, labeling Juni’s homemade Korean kimpab as “the Korrito”.

Juni is clearly having none of that nonsense, with a little moonlit digging project.

Be careful mislabeling someone else’s cooking, especially when they’re sharing their home recipes.

So obviously this comic is completely on the civilian side of things, and part of the slice of “regular life” of our characters. Since these folks are Reservists, they actually spend most of their time as civilians and just do the Army thing one weekend a month. So I thought this would be a fun break, and there are a lot more Army-themed comics coming.
Until next time!