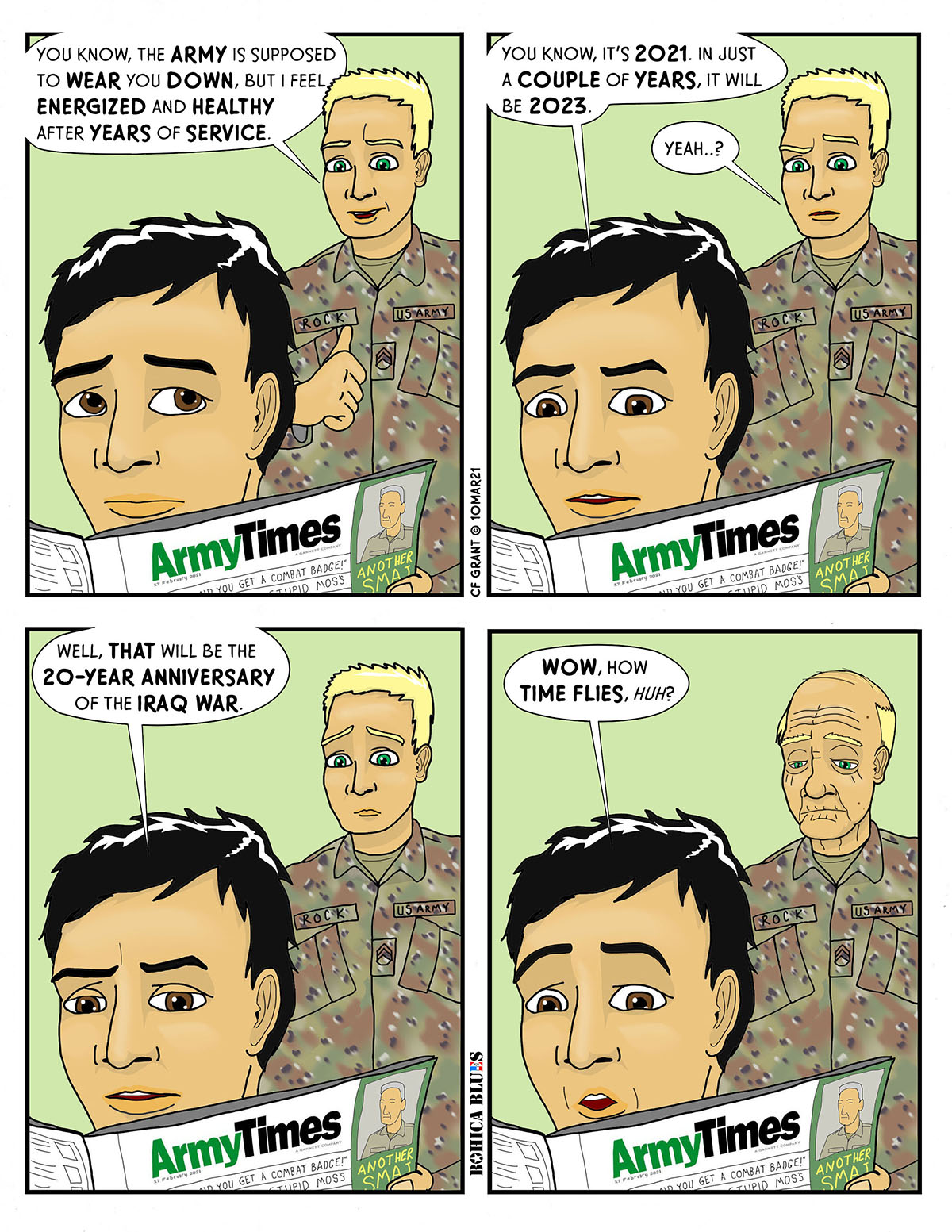 The initial invasion in 2003 was kicked off on the 19th of March, 2003, with an intense air campaign. At the time, it was believed that the US would follow the same pattern it had during the 1991 Gulf War to liberate Kuwait: weeks and weeks of air operations that would thoroughly wreck and demoralize the defenders, and only then would the ground forces step in. It was a reasonable assumption, really, since it had worked quite well Back In The Day.

Therefore, I think it is safe to say that a lot of us were surprised that the ground invasion went into full gear the next day, on the 20th of March, 2003. I was not involved in that but I knew people who were. That was OIF-I, or Operation Iraqi Freedom phase 1. I got notified that I had won my all-expense-paid tour of Mesopotamia around October 2003, I was then sent to another Engineer unit around December of that year and by February of 2004 I was in Kuwait, awaiting my part in OIF-II, the second phase of Operation Iraqi Freedom.

By that time a year later, end of February/early March 2005, I was back in the States.

I’d planned to do “BOHICA Blues” as a webcomic for some time but never got around to it. It never seemed to be “the right time”, and I allowed myself to over-analyze things. Did I want to do regular characters, or just have a rotating cast of “anybodies” with no real characters? And did I want a running story with a plot and development and coherent storylines? Or just “whatever seemed funny today”? Even little details like “color or black & white” were a reason to put off making a decision.

At one point, my wife got me space on a webhost for a birthday present. I let it linger for a bit but started doing some more serious “research”, mainly reading other webcomics to see how they did it. I did some character design art, and found “Terminal Lance”, which showed me that there was, indeed, an audience out there that was interested in military-themed webcomics– I didn’t want to waste my time, after all.

In 2013, the news cycle began about the 10-year anniversary. To me it felt like the disconnect between the actual experiences I had, and the impressions being broadcast to the public, weren’t matching up. And a lot of the talk about veterans of the war gave the impression that, pretty much as a cohort of the population, we were shattered and deeply spiraled into darkness and depression.

To be sure, some people are having difficulty coming to grips with their experiences. But I don’t like writing off a whole population, or easy labeling… or putting off helping those of us that need help by waving us all off with, “well, they’re all just broken”. Maybe I’m blowing things out of proportion or being overly sensitive, or whatnot, but I remember how the Vietnam vets were treated for awhile– they were mostly fodder for patchwork dramas about “crazed veteran” stories in TV and movies, lazy writing in my opinion. We saw some of that briefly with the Iraq veterans, stories focused on violent or even bloodthirsty lunatics irrevocably bent and twisted by their experiences. The mood seemed (to me) to be, “if you don’t beat your spouse, did you even deploy, bro?”

Of course, then, things jumped in the other direction, with some kinda weird hero-worship fables going into lalaland like “The Hurt Locker”. (Did someone lose a bet? “If I don’t make this putt, I’ll write a screenplay that makes “Rambo” look like a documentary”).

So I wanted to tell my version of the story, and in a way that isn’t wallowing in grimdark or glorifying the stupidity of war, but also not belittling or ignoring these things. To me, how the public perceives the war and the people who fought there plays a large part in how we as a people (veterans and civilians) learn the needed lessons and move on, hopefully wiser. The 20-year anniversary will be another moment to pause and reflect and think about what we’ve learned (or not learned as the case may be). I hope BOHICA Blues helped bridge some of the divide and did so in a way that was comforting and approachable.