Know It When You See It 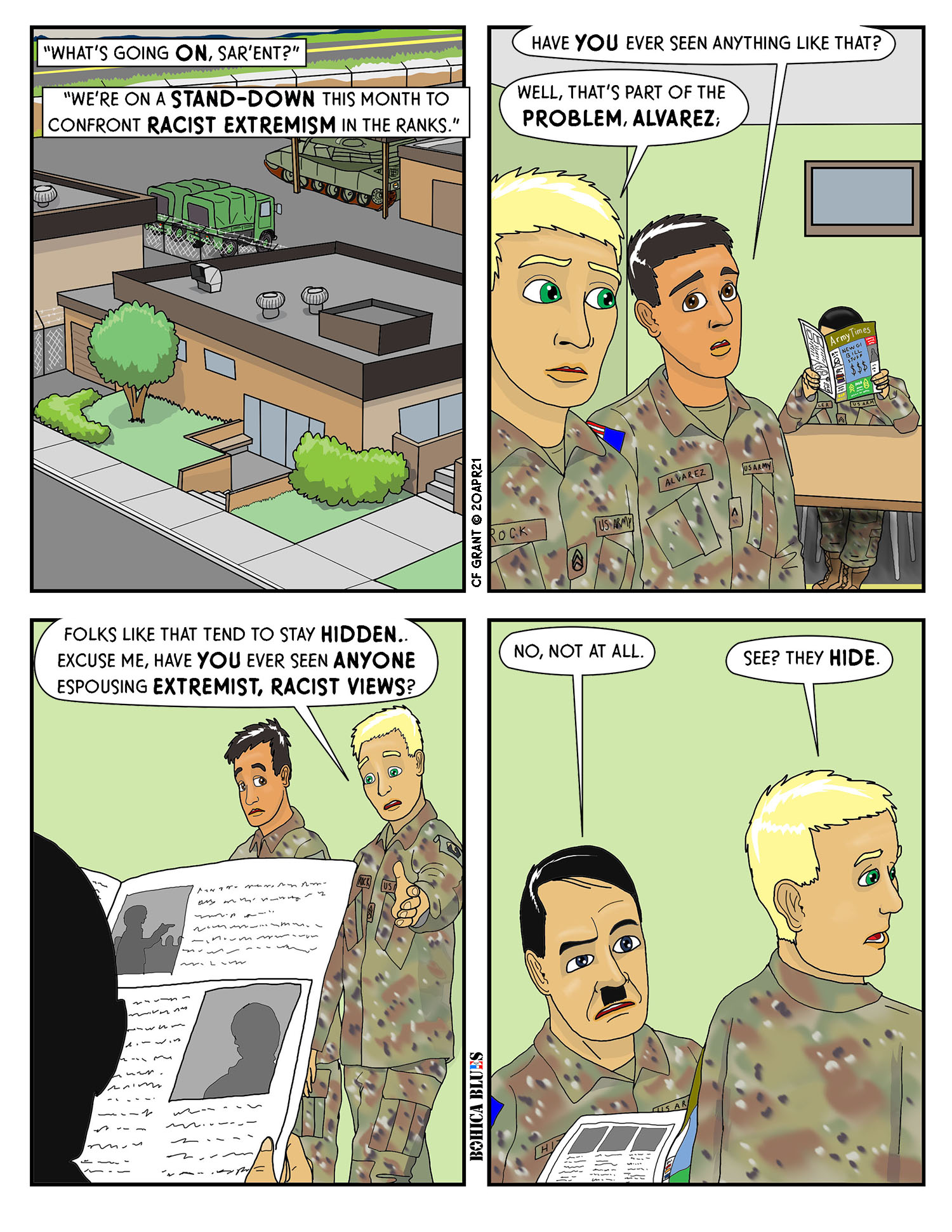 Know It When You See It

Recently, the armed forces –under the direction of Defense Secretary Lloyd Austin– instituted a 60-day “stand-down” policy to address racism and extremist viewpoints among military personnel. The purpose of this was to get trainers and leadership confronting the presence of racist viewpoints within the military.

The problem is, as in the comic, there’s no way to know exactly who is racist or who holds extremist views at any given moment, unless they choose to display it openly and make it obvious. Even then there are people who may not clue in that the views being espoused are racist– hard to believe, but there are people who are either uninterested or unschooled in some things, or they don’t care.

So, a 60-day stand down is a good idea then, right? Get people who might be ignorant of the topic a bit of information? Well, not necessarily. Because people tasked with the educating may be even less knowledgeable… or even one of the people holding the viewpoints in question. And there’s a lot of people who hold unconscious biases– viewpoints that would technically be considered racist (or sexist, etc) but they don’t realize it. Things they were told or taught or got mistaken impressions of, or they had no previous knowledge beyond, perhaps, media stereotypes. They honestly don’t realize that the view they hold is out of synch with reality until something comes up… and then it’s usually pretty awkward for people involved.

Confronting racism and extremism is a good idea, but it just seems to me that there’s no real plan or solid objectives or benchmarks to measure progress towards. You don’t know what someone thinks or feels inside. This doesn’t mean it shouldn’t happen, there’s no excuse for inaction on things like this. But a better idea of where we’re starting from, what we need to do, and how to get there would be good. It’s definitely more marathon than sprint.

As far as the comic, I already had this about 50% complete when I read the news about a guy who was a military contractor & weekend Reservist who actually groomed himself to look like Adolf Hitler. He grew a toothbrush mustache and combed his hair to make himself into a living replica of the infamous Third Reich leader. I was a little surprised (and kinda creeped out) that what I thought was an outlandish caricature actually had a real-life counterpart. I figured I’d go ahead and go through with the comic, now that it seemed even more on-spot than ever.

And this is why you should Know It When You See It.