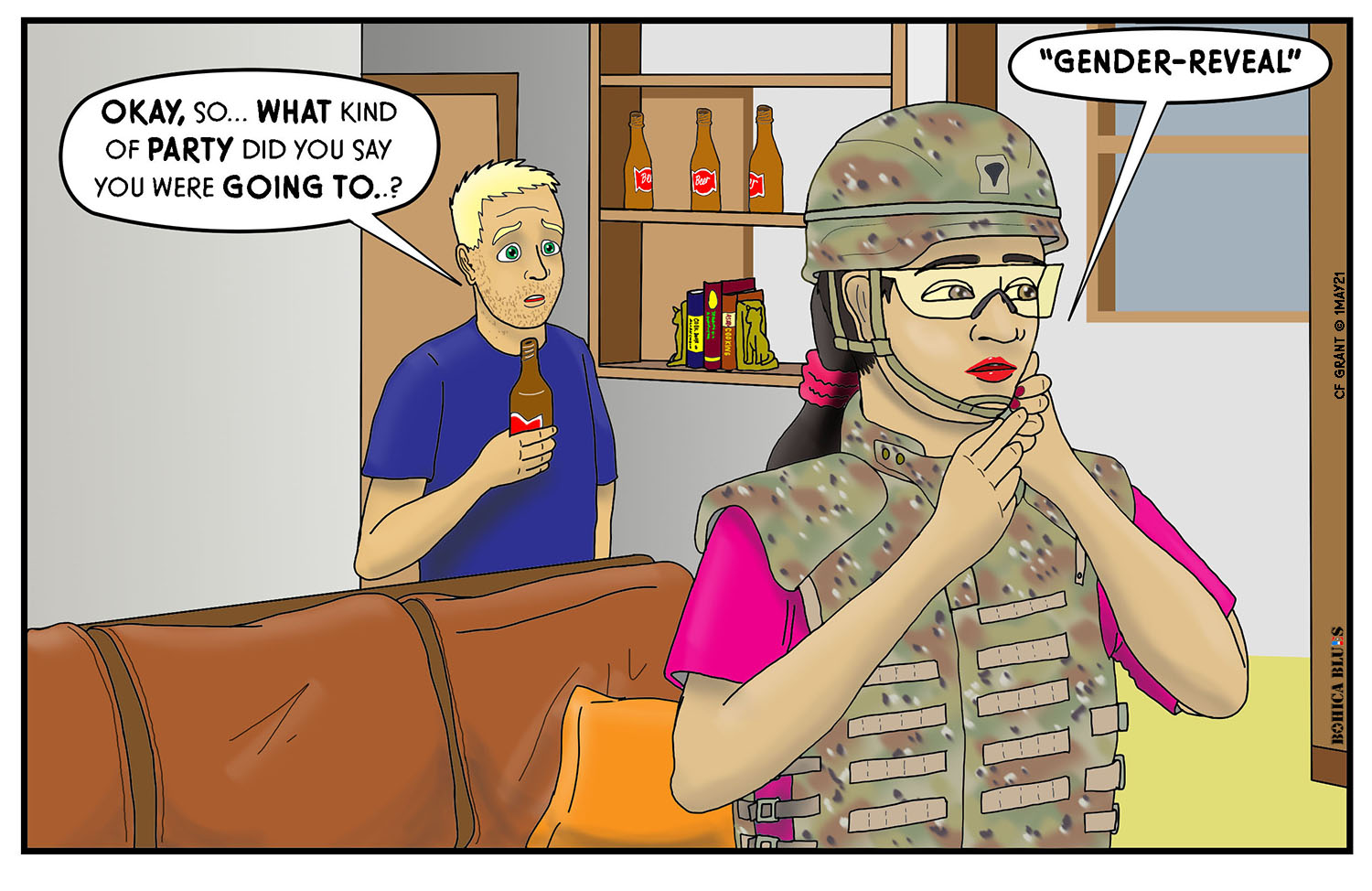 Has anyone else noticed how incredibly dangerous “Gender-Reveal Parties” have become? Wow! Explosions resulting in immediate death, death by follow-on causes such as wildfires, and recently even a plane crash. It almost makes you think that you need your full set of body armor just to go have a good time and see whether the cratering charges were placed delicately over either a pink or blue volcano.

Everyone loves an excuse to party, but I only recall gender-reveal parties to be a recent phenomenon. When I first heard of it I thought it was just another gimmick to try to get gifts (I’m kind of cynical that way, sorry) but for a lot of people this is a big moment– do they name their kid Jack, or Jackie? Do they buy Barbies or GI Joes? And why not both and let the kid decide?

So Juni got invited to a gender-reveal party and she decides to strap up just to be safe. A lot of Reserve and National Guard units will let soldier take their tactical gear home with them, but just as many do not. It seems to fluctuate depending on a number of factors ranging from how much storage space is at the unit itself and what the commander’s policy is (or if there is a higher commander that specifically wants it one way or another).

As with a lot of things, there are advantages and disadvantages to both. Storing things at home means you have all the time in the world to clean and organize your gear as you like, get in comfortable, and so on. You can place your ammo pouches and pack straps in ways that work ergonomically for you, and then when you need the gear, it is familiar to you. The downside, of course, is that you have to store it. It is frequently bulky and heavy and you may have to load it up and pack it with you each month to go to Drill. And there’s always the danger someone will break in and steal it.

Storing at the unit means that it is there if you need it, and last-minute changes to a load can be accommodated without having to run home (if you live nearby) or draw a replacement. You don’t have to transport it or lug it around during travel, and security is largely the unit’s responsibility. Of course, an unscrupulous soldier can also break into your storage locker when the unit is minimally staffed; there’s an old saying that there’s only one actual thief in the Army, everyone else is just trying to get their stuff back.

The unit I’m in now allows us to store things at home, but we also have to sign a note saying that we will not use military-issued gear for non-military functions. So no using our super-insulated sleep systems (sleeping bag, liner, & bivy sack) to go hunting or camping.

For the record, I used to store my stuff at home. I’d clean and organize it and such, and a few times I even took it on day hikes to make sure it would wear properly and not bind up or ride uncomfortably, and make adjustments as needed. Back when I was in my 20’s, I used to call that “fun”. Now that I’m older, I store my gear in a locker at the unit, because “fun” for me means going home after weekend drill and not having to unload a bunch of gear from my truck and put it back in the garage– I can just go straight to the “beer” part of post-drill activity.

Either way, I hope Juni has fun at the party she was invited to, and if the people throwing the party are smart they’ll load the pink or blue powder for the Big Moment with a few cups of quick-clot for the sake of the audience safety.

If you enjoy these comics, consider supporting me on Ko-Fi
–or at Patreon
All proceeds generated go to supporting comics projects. Thank you!