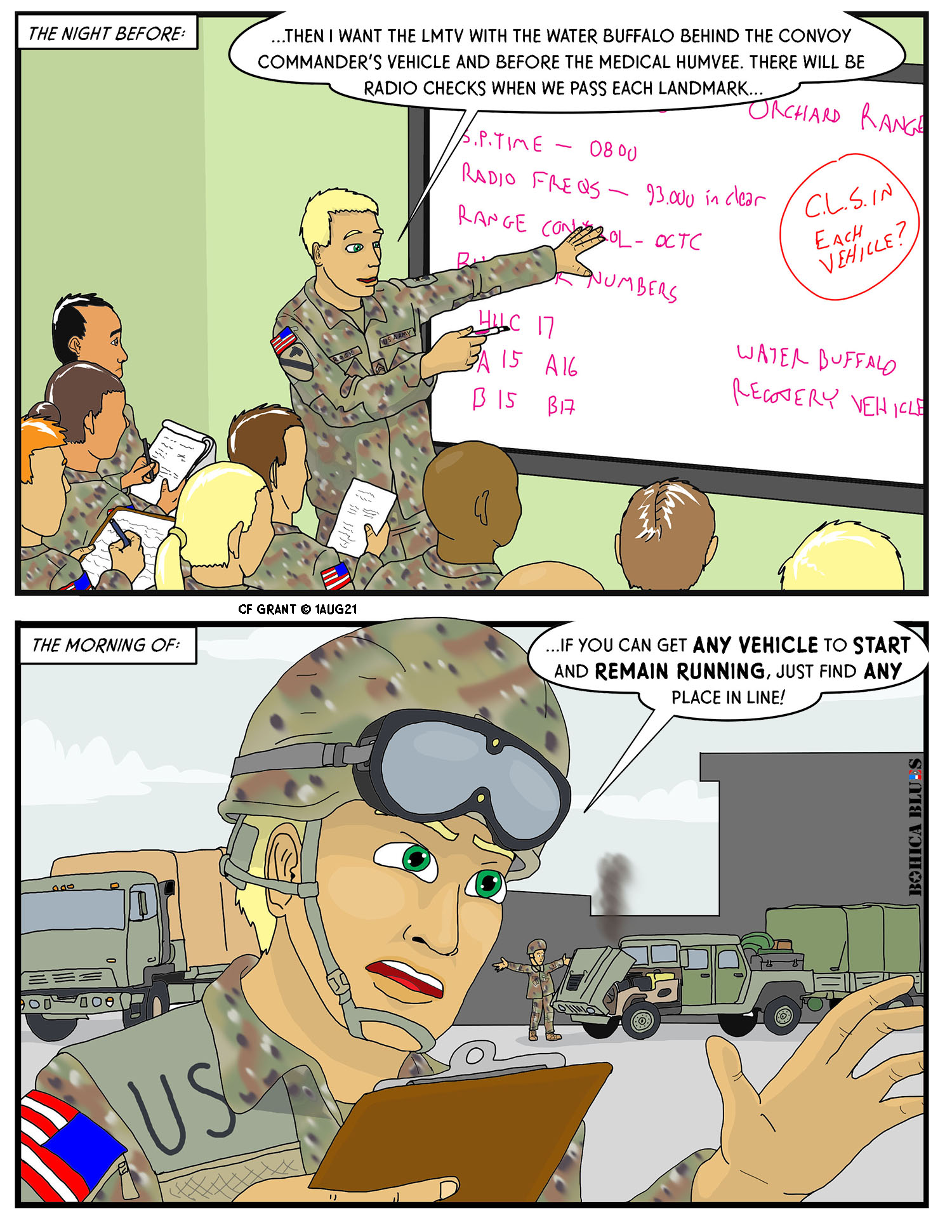 I know, I know: “You need to PMCS those vehicles first!”

PMCS is “Preventative Maintenance Checks & Services” and really, performing PMCS on equipment is probably the number one task most military personnel carry out in their daily lives– even before training for their actual stated duties (the second most common task being “inventories”). Pretty much every single piece of equipment in the military has some sort of PMCS routine and checklist that troops are supposed to go through before using the item in question.

In fact, sometimes you’re not even going to use the item; it is entirely possible that you can be assigned to go through a store room, warehouse or motor pool and just do maintenance checks to make sure everything still works, and then that’s it– you put the equipment right back and do it again next month, or next quarter, or next year… whatever the PMCS schedule says.

But anyone who has worked around military vehicles especially know that these things will break just sitting in a parking lot.

You don’t see this in its full glory until you have to do a convoy movement somewhere. Convoys seem pretty simple and straightforward, but they are not. Someone is designated the Convoy Commander and then there’ll be an Assistant; there are briefings about the composition of the convoy, road speeds, catch-up speeds, breakdown & recovery response, what to do if there is an injury, performing a “reconnaissance-by-map”, checking vehicle loads, and so on. The military loves to cover every possible detail, making things very complex.

Naturally, doing those PMCS checks on the vehicles in important. In the Reserves and Guard it is common to do PMCS checks each month (even if you’re not using the vehicles that month) but then you’ll also do a check the night before, and try to either fix or replace vehicles that have failed the PMCS checklist (and if you replace a vehicle with a different one, now you have to do a PMCS on that one, too).

I don’t know what it is –the gods of the lowest bidders, perhaps– but a vehicle that passed a PMCS check the night before with zero faults has about a 50% chance of being completely mission incapable the next day, and for no discernable reason. Worse, vehicles that passed a PMCS check the night before or the next morning have been seen suddenly billowing blinding clouds of smoke from the engine while trying to maintain 55 miles per hour on an Interstate, halfway to the destination and without so much as a rest area within 50 miles. Carefully and artfully laid out operations end up being last-minute patchworks of contingency plans.

But, why have breakdown and recovery briefings if you don’t intend to use them, right?

Stay safe, and… until next time!