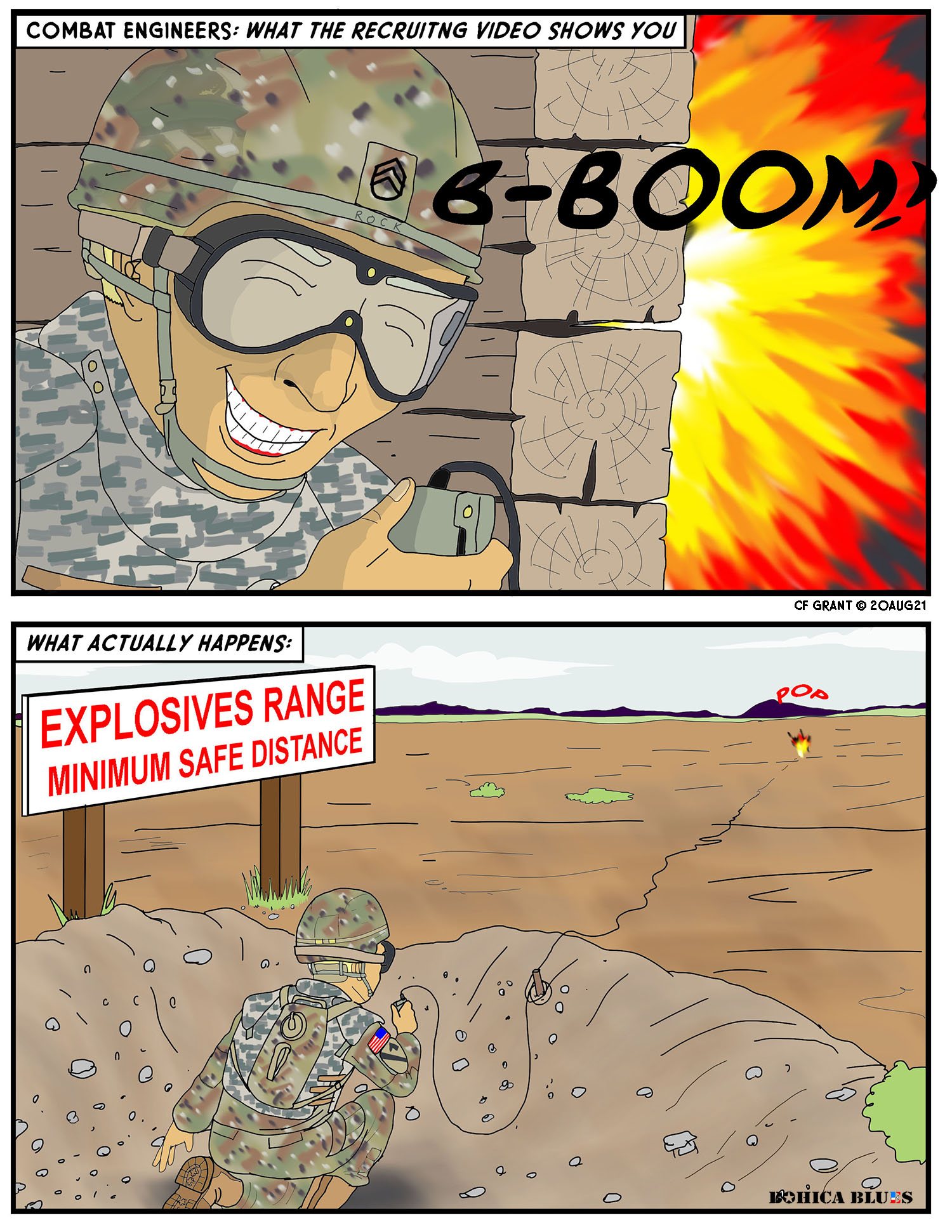 One of the reasons why I was so disappointed with Combat Engineering was the training we got with explosives– which is supposed to be one of the more novel, unusual, and (let’s face it) downright fun reasons for taking this job in the first place. Combat engineers are always shown in the “cool videos” detonating a lot of explosives, danger-close, and blasting in doors (or better yet, creating new doors in walls) so that an infantry squad can charge in, doing all their dynamic-entry “hooah” stuff.

Yes, you are supposed to be right next to that blast, with a bit of buffering material between you and it– the loud boom, the shockwave washing over your body, the ground shaking and after a moment, the light pelting of debris falling through the kicked-up dust and smoke. Your team charges through while the supposed enemy is shocked and disoriented and you own the battlefield, or at least you’re the property manager for a few brief, fun moments.

Don’t you believe it! In several years of explosives training, I only got to experience something sorta like that exactly one time, and that was at Ft. McCoy preparing to mobilize, when they were training us on some of the cool door-breaching charges. Stuff with bundled “det cord” (a thin wire of explosive) or a half stick of C-4 (“plastic explosives”) behind a water jug to help focus the blast, stuff like that. We set some off from just around the corner of a very well-built training house.

The rest of the time –and this was every year we did explosives qualification ranges– we were required to be at a properly mandated safe distance such that the resulting explosion, even a “ring main” with multiple blocks of C-4 strung together, was like a tiny puff of cottony orange, way way waaaaay on the horizon. Bear in mind a single block of C-4 has the explosive equivalent of 1 and 1/4th of a stick of dynamite, so this is a respectable amount of boom-boom power. It was profoundly disappointing to me.

It’s possible training is changing, or perhaps there was some sort of mandate from higher-ups in our command at the time. After all, someone is filming those training videos, and someone is doing all this cool demolitions stuff. I didn’t get to see a lot of that, unfortunately.

Those training videos also don’t show you how much math goes into the job, too. There is an insane amount of math in Combat Engineering; the explosives have a certain level of destructive power (that can change if you focus the blast by covering it with other materials), and you have to calculate that explosive power against what you’re trying to blow up. Wood has different materiel properties than cement, or steel, or steel-reinforced cement, or pavement, and so on. And that’s before you calculate the surface area and volume.

So you pour a lot of thought into something that has very modest special-effects payoff. Bear that in mind when you watch those recruiting videos!