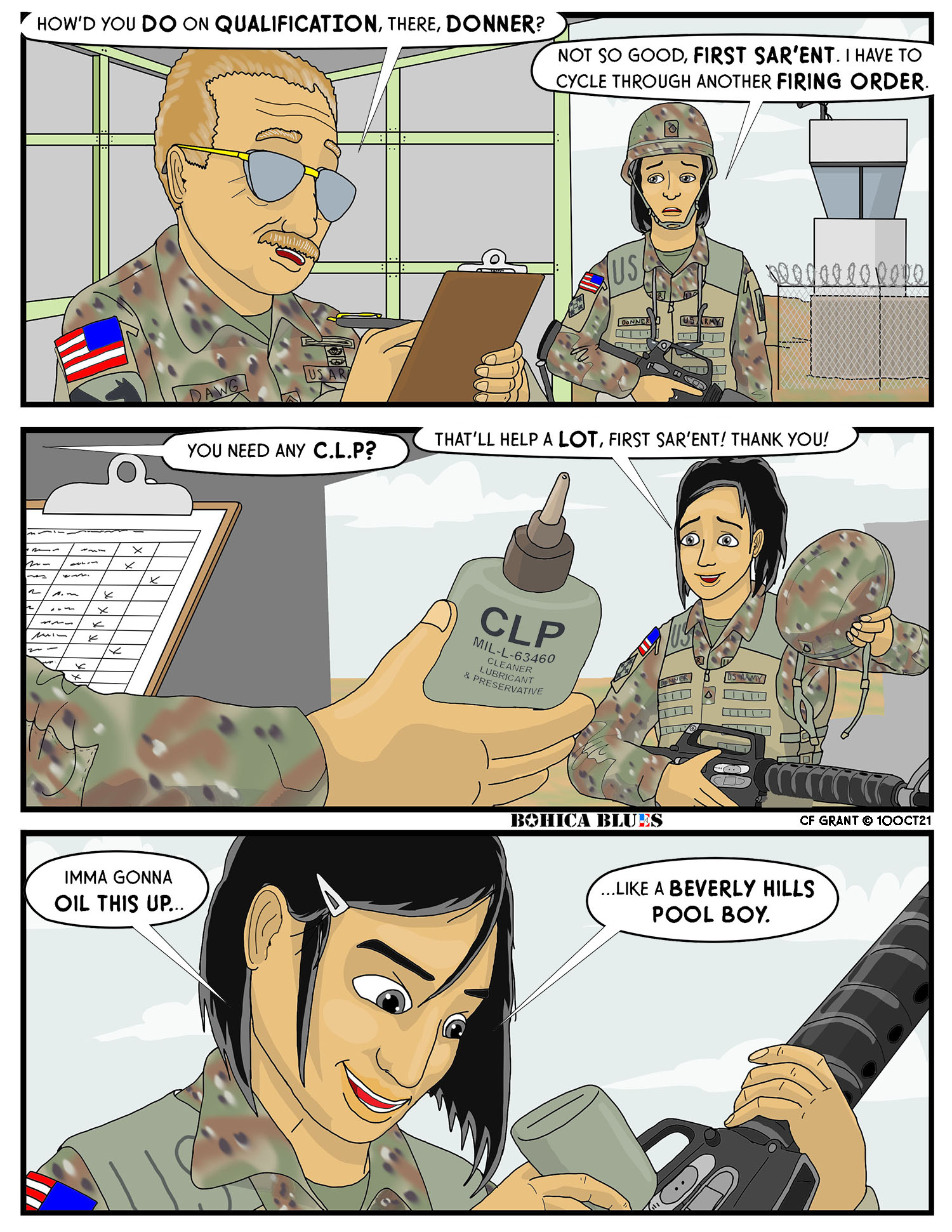 “CLP” is a weapon oil, and the letters stand for “Cleaning, Lubricating, and Protection”. It is the standard Army-issue oil for weapons maintenance. Many swear by it and it is available in a civilian form; others find different civilian-market weapons-cleaning oils and lubricants superior (“Hoppe’s” brand, for example, was very popular among guys I deployed with). I’m most familiar with CLP and tend to default to that, but I have also had good experience with other brands.

There are two competing philosophies on the M16 family of rifles (which includes the M4)– one, is that they are best kept “dry”, with just barely enough oil to allow movement, or two: that they are best so thoroughly oiled and “wet” that droplets spatter from it as you’re firing.

When I first joined the Army my Drill Sergeants at the time seemed to be adherents of the “wet” philosophy, and there was no such thing as “too much oil”. Our armorer at Basic Training (an “Armorer” is the person that stores the weapons and makes sure there are no pressing maintenance issues that threaten breakdowns) also seemed to be of that philosophy, and she said that we needed to keep a coat of oil on them at all times.

I internalized the “wet” philosophy and thought of it as doctrine for years, but over time I saw the reasoning behind the “dry” philosophy– the idea that these weapons are best stored with little to no oil on them, and given just enough that they don’t jam when taken out to fire. A heavy coat of oil in the field attracts a lot of dust and dirt and other particles, which can frequently only be dealt with by applying more oil, which will solver the problem temporarily but but compounding it later.

Plus, a lot of oil during storage continues to work away at, and break up, grease and carbon build-up in storage, so when you draw the weapon again, it is already dirty before even firing.

I’d say that in a temperate environment, I still default to the “wet” philosophy, but experience in Iraq (the country is pretty much made of nothing but dust and grit) I’d change to a more “dry” philosophy.