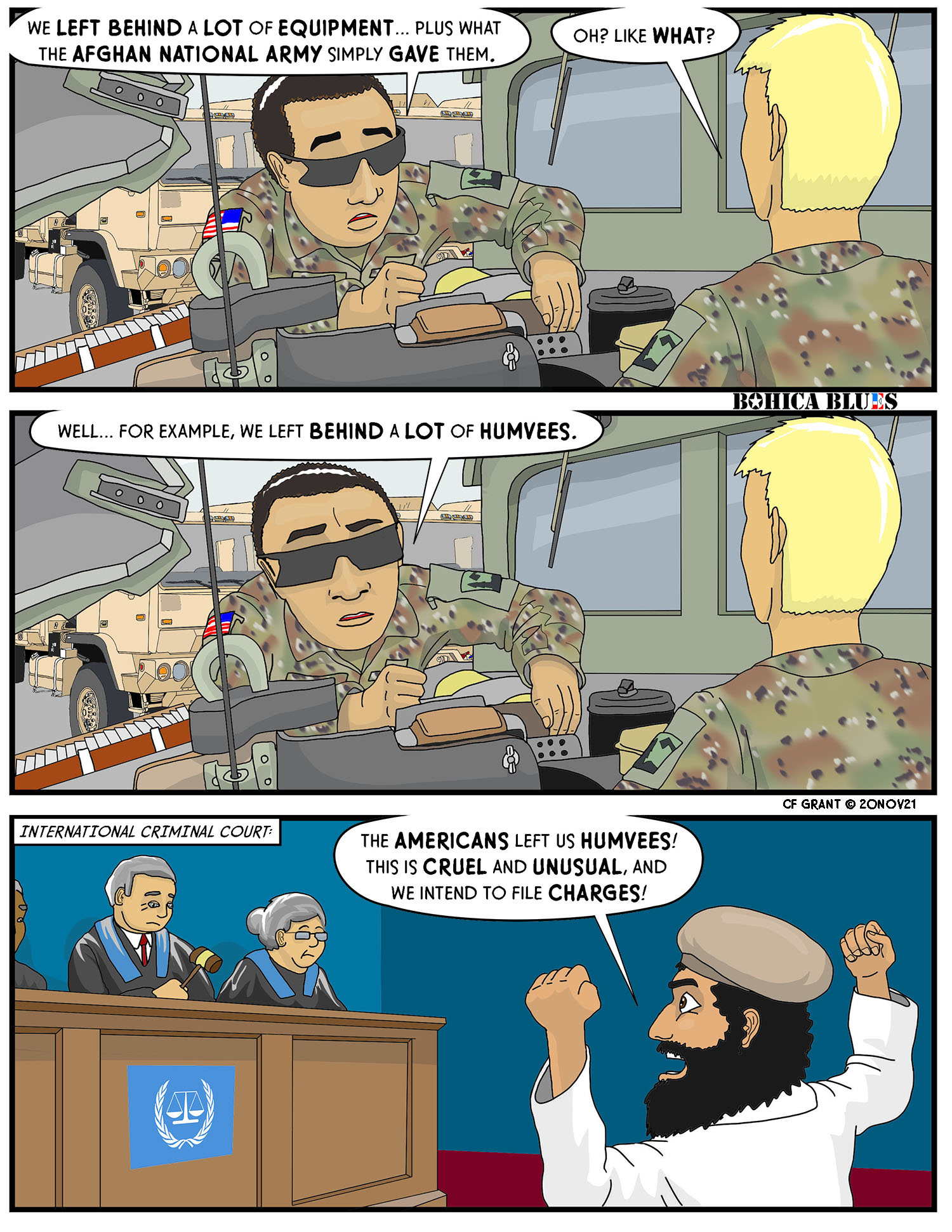 Sometimes it seems like ya just can’t do nothin’ right!

After a 20+ year war, people can write volumes of rights and wrongs, and things done with good intentions that turned out to be mistakes, or things that never should have been done in the first place. But one thing that we might all be able to agree on is that saddling a people with a multitude of surplus Humvees might well be considered cruel and unusual punishment.

In more seriousness, there are places around the world where the United States poured lots of money and resources to support allies. Some of these allies may have been worthy, some nefarious (most of this will depend on your point of view, of course) but there are many areas where it turned out we backed the losing team. We poured so many weapons and materiel into Vietnam, for example, that for a long time former US equipment was used by the victorious Socialist Republic of Vietnam– things like M113 armored personnel carriers, some artillery pieces, and small arms such as the M16 rifle and M79 grenade launchers, for example.

Vietnam isn’t the only one, either. The Islamic Republic of Iran to this day maintains M60 tanks, M113 personnel carriers, AH1 Cobra attack helicopters and (infamously) the only surviving stocks of operational F-14 Tomcat fighter-bombers (of “Top Gun” fame) still used as a front-line fleet.

Elsewhere in the Middle East, the books are still being written on Iraq. So far the government we’ve mostly reconciled with is nominally the one we chose to back (how’s that for sidestepping?) and they have stocks of US equipment as well. Will this remain in more-or-less friendly hands? Some was lost in combat to the then self-declared “Islamic State” but either recaptured or destroyed in subsequent engagements, but Iraq continues to draw equipment from the US and other NATO nations as well as China and Russia.

So is any of this a real problem, apart from having our stuff fall into unintended hands? Well, it has always bothered me a bit. US equipment is made for smaller, professional, and highly technical armies and doctrine. Our gear is generally pretty rugged, but it is not simple– we roll the dice on a slightly lower level of ruggedness (in my opinion) in order to squeeze out a little more technical superiority. We can do that because we can afford to produce lots of replacement parts, and we have a workforce that tends to be skilled and educated at a more common level. This is not sustainable for a lot of countries.

I’m not saying that these other countries or their people are stupid, but rather that their industrial base probably can’t produce the level of tech that is needed for easy, guaranteed sustainment– or, if it can, it can’t do it in quantities without breaking their banks. And in some cases, a ruling group will limit the education or advancement of other groups, meaning that the technical proficiency demanded of US and Western equipment becomes another means of subjecting portions of the population. Or, conversely, the country’s armed forces become utterly dependent on US technicians.

All of these factors will breed resentment and set the stage for possible future conflict.

The Afghan experience with their captured Humvees will probably not last that long, however. Any technically demanding or finicky equipment that fell into their hands will probably just be used until it degrades to the point of irreparability, and then it will be abandoned. But for awhile, things like Humvees will probably frustrate and annoy them the same way they have frustrated and annoyed decades of US soldiers. If we knew that each captured Humvee also came with a box of reflective PT belts, perhaps we can say we got the last laugh?