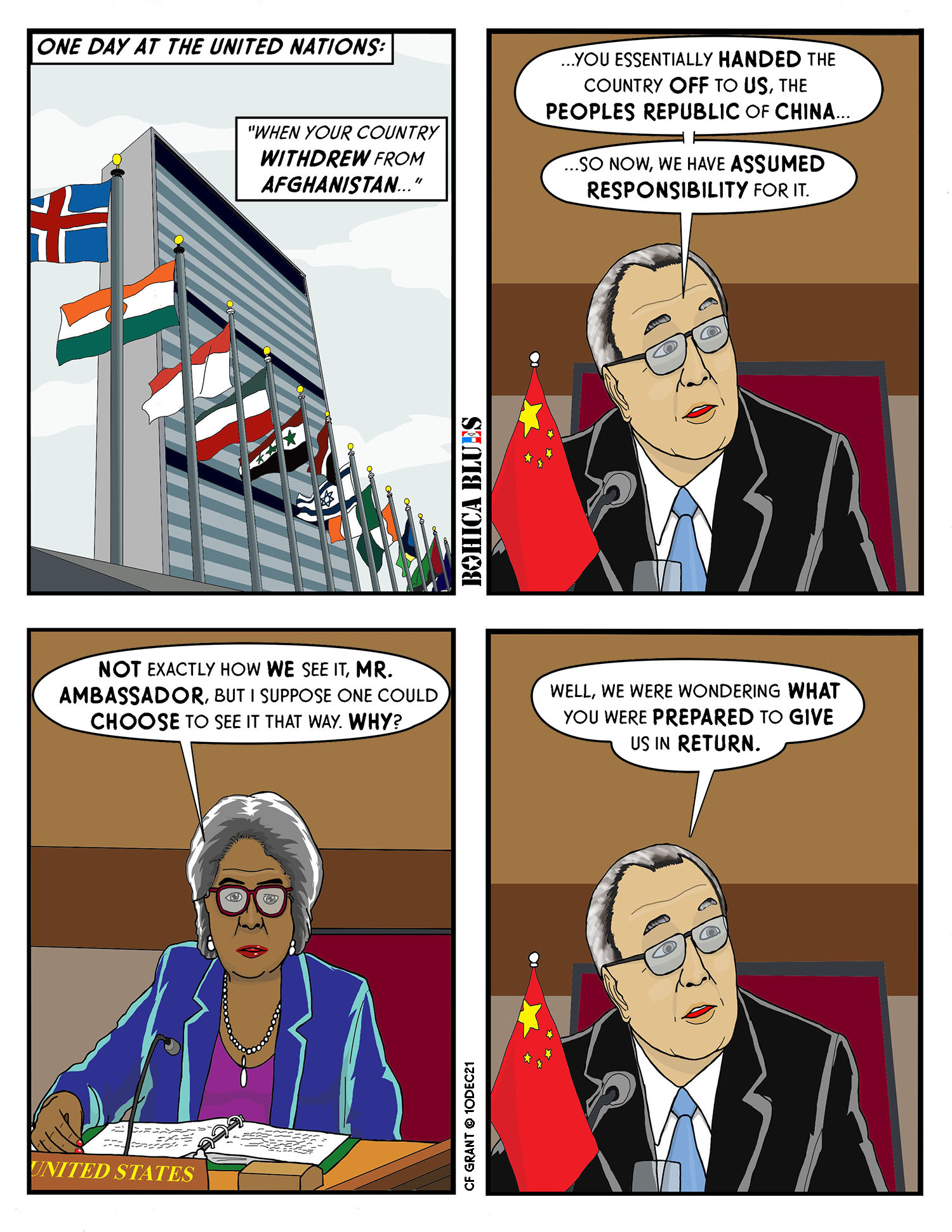 “We took this mess off your hands, so…” –The first time I heard this joke, or at least a variation thereof, was in reference to the Arab-Israeli conflict. It was in the mid-1990s, and the Oslo Peace Accords had been signed, establishing the Palestinian Authority in the West Bank and the Gaza Strip. In the cartoon, Palestinian leader Yasser Arafat tells the Israelis, “You have given us the Gaza Strip; what are you prepared to offer in return?”

The joke of course was that the Gaza Strip –like Afghanistan– was a dysfunctional mess. In the case of the Gaza Strip, it is a fairly urbanized and densely populated coastal strip (hence the name) with poor services and neglected infrastructure, and high unemployment. Because of that, it was also a hotbed of political agitation, so being placed in authority over the Gaza Strip was definitely not a “gift” by anyone’s standards.

So you can probably see the parallels with modern Afghanistan. With the US out, and China apparently rushing in, they might want to ask for a fee for taking over the mess on their borders.

The tragic thing about both of these circumstances? Both areas, the Gaza Strip and Afghanistan, could potentially be really nice places if things were different. The Gaza Strip is a stretch of Mediterranean beach, and having spent a lot of time on Mediterranean beaches myself, I can say that it would be a fantastic spot to lounge away the day. It even has offshore natural gas deposits, if you’re into that sort of thing, and would be a good transit point for regional trade. All, alas, if there could be more than a moment’s peace in the area.

And Afghanistan? I’ve never been there but I hear it is beautiful. I know it used to be a popular spot for backpackers retracing sections of the old Silk Road, and it was sort of a gathering spot for hippie travelers in the 1960’s and 70’s looking for adventure (and probably some local hashish).

But for the foreseeable future, Afghanistan and the Gaza Strip both, and probably other areas of potential great beauty, are closed off to us because crummy leadership propelled by political exigencies has ruined it.