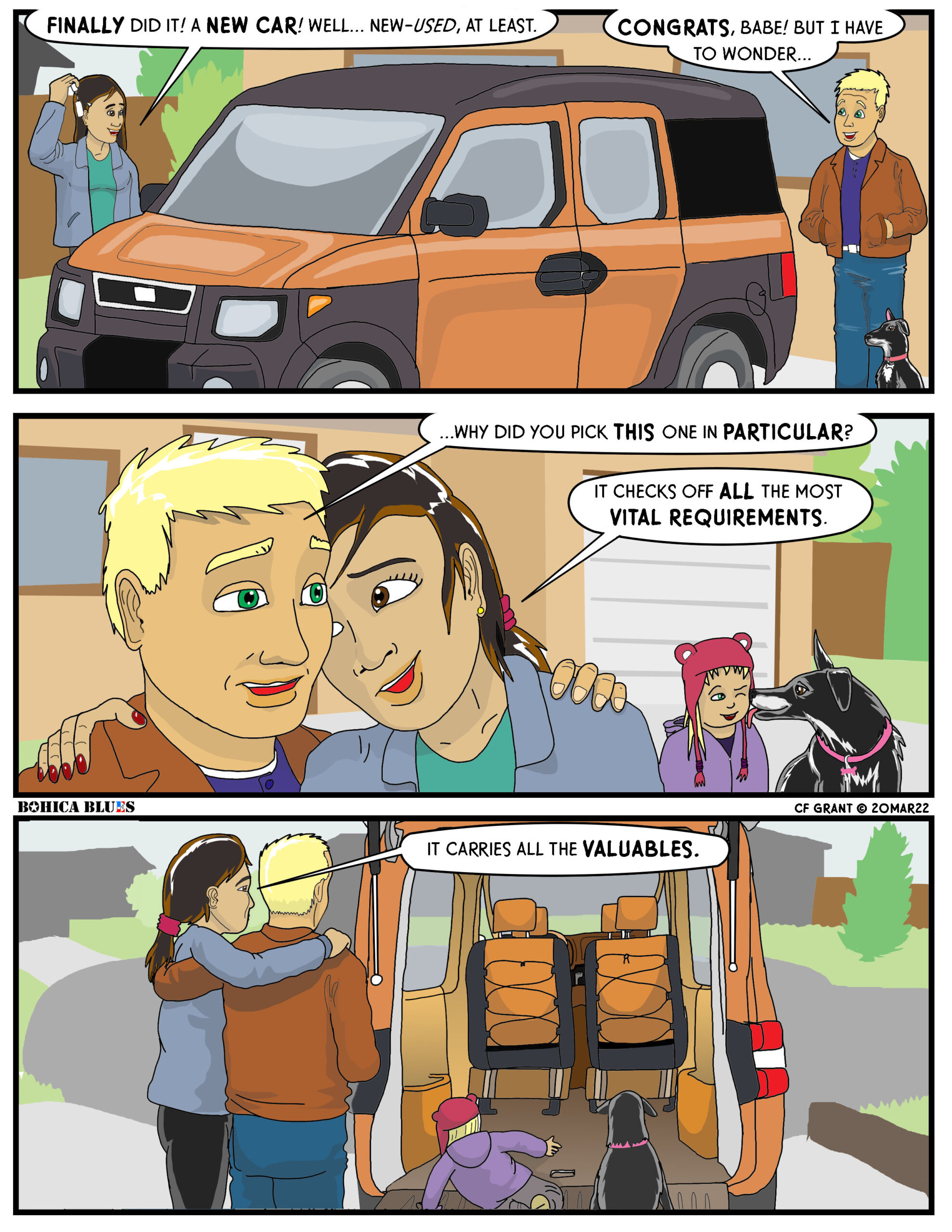 So Juni finally settled on a Honda Element. I have no particular feelings one way or another about this particular model of car (as opposed to the Kia Soul), but it did seem like a very “Juni-like” vehicle she would appreciate. It’s kind of an SUV but also kind of a car/van thing, and from what I understand it was especially popular with people that have dogs because apparently some of them came with a built-in space specifically to hold a water dish steady for canine traveling companions.

I sometimes forget to include the fact that Joe and Juni have an extended family! Josefina Hana Rock-Okuda was born as Joe was finishing up his last tour in Iraq. Since wrapping up the official story in June of 2020 I have left the passing of time in the story kind of vague and unmoored; tackling just basic humor as it presents itself without adhering to a specific timeline. Joe and Juni returned to their regular ages and ranks from the story, but I put them in more modern times, dealing with things like mask-wearing during the pandemic and other topical things.

So technically Joe and Juni should be older, Josefina would be about 10 or so, and so on. But there’s a lot of potential to cover in that age range and during their continued service with the Army Reserves, so I’m just putting them at whatever ages works for the story.

In doing that, though, I kind of completely forgot to include the fact that they have a kid and a dog! I’ve done a lot of comics about their personal lives but overlooked things like child care and schedules and so on. Here, little Jo is a toddler of indeterminate age, and Sadie’s little bestie. I have been wanting to create a comic that brings Jo and Sadie back into the action but have been putting it off, not having a really good way to shoehorn them into anything.

But I decided this would work well enough; not really a funny vignette with a joke at the end but just more sentimental or heartwarming content. We all do a lot of things for our families, and take family needs into account when making purchases– and that includes picking a new vehicle. Of course Jo will be secured properly when traveling, and not just tumbling around in the back.

From an art perspective, I had a hard time getting this one done. Regular followers know that my day job has been pretty stressful lately due to being tragically short-staffed, and home life has been interrupted by a partial remodel which literally just finished this week. Now it is time to stop using the living room as a storage unit and start unpacking boxes and putting everything back! I’ve been squeezing in comic work when I can and for some reason this particular cartoon had back luck. I saved wrong backups, overwrote some stuff, and had to re-do a lot of things at the last minute. But it is done, even though I wished I’d had more time. Whew!

Anyhow, the next few comics will feature Juni at training for her new Army job, and eventually some topical references to events in the news. Stay tuned and stay safe out there.