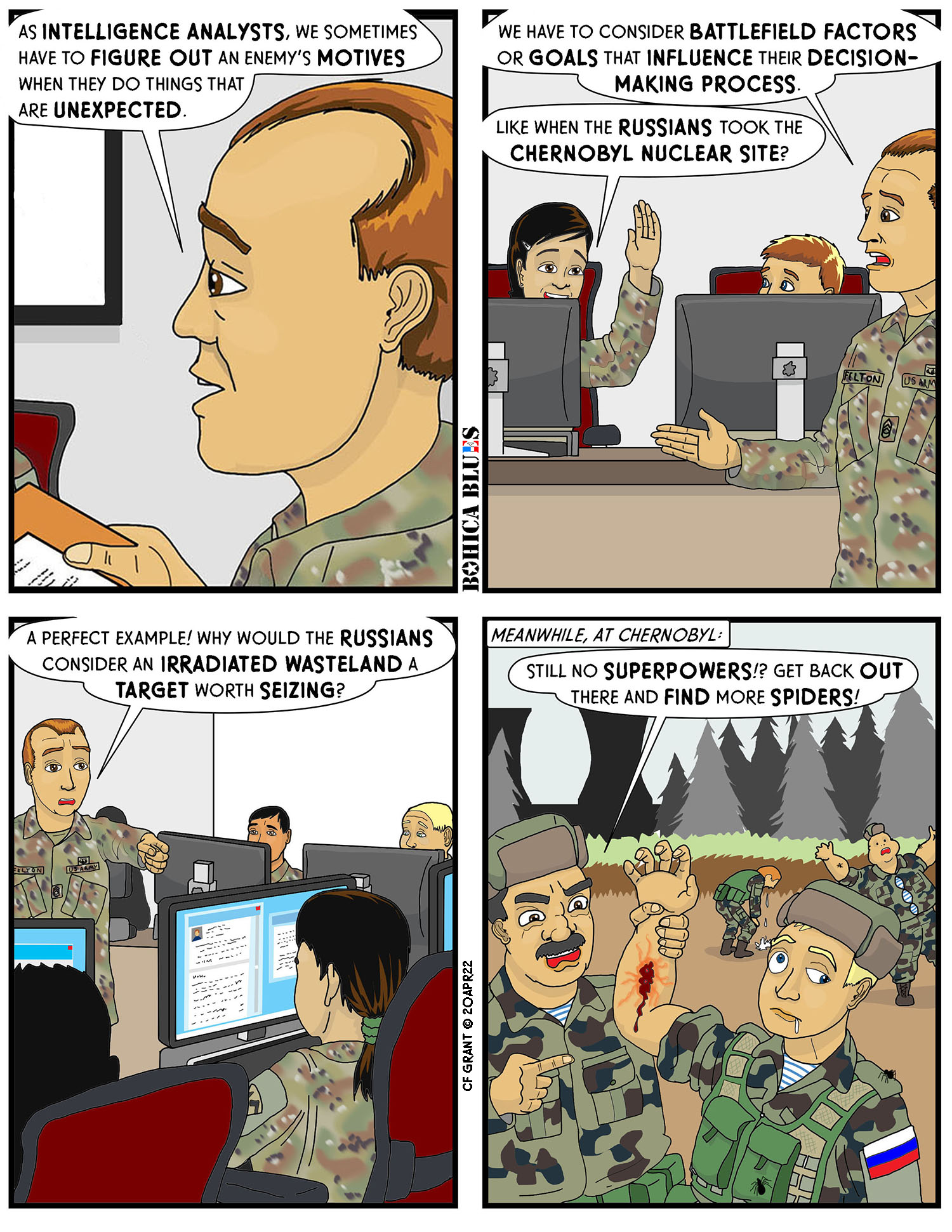 It’s true that one of the jobs of an Intel analyst is to try to figure out the motives of an adversary. It can be tricky, of course; you’re basically being asked to try to get into an enemy commander’s mind and predict the future.

But while it sounds like scrying and reading tea leaves, it isn’t. It’s just analysis and deduction, and the more information you have the, the better your analysis can be. One easy thing to find is an enemy’s doctrine: all you have to do is read their own handbook on what they expect their armies to do, and how they intend to do it. Much of an army’s doctrine can be publicly available, and of course you can also look into their history and political decisions to see where things are going.

Sometimes, you can even look at how their vehicles are built and how they perform and get an idea of how their leaders and planners intend to use them. Russian vehicles are built with amphibious ability from the moment they are designed and built, so you can guess that they see themselves crossing a lot of rivers and small lakes, or doing assaults onto beaches. British tanks historically favor armor and guns at the cost of speed, so they see tanks more as infantry support weapons rather than charging off to carry out smashing attacks. The Israeli Merkava tank works great in the desert but would be poor in the Arctic, so they don’t see themselves doing a lot of expeditionary warfare outside their immediate area. And so on.

If you have a personnel file on individual commanders, so much the better! Is a commander known to be bold and reckless, seeing himself as a daring student of Patton or Rommel? Then expect surprise attacks from that guy. Or is he cautious and sticks to the book? Then perhaps his attacks will be limited but his defense might be stronger than most.

Of course, you can second guess yourself and get caught up in “the paralysis of analysis”, where you are thinking so much about a situation that you can’t bring yourself to act, and then you’ve lost the initiative.

But the early Russian decision to take and hold Chernobyl, and the exclusion zone around it, will always strike me as odd. It ties down a lot of soldiers and resources in an area that isn’t very valuable and doesn’t provide much of anything. I suppose if they didn’t take it, then they’d worry that a daring Ukrainian commander would try to get an attack through there… perhaps. But there are ways to secure that without tying up so many resources. We may never know the motivations behind that particular move, but I’m sure it made sense to someone up the food chain. Eventually, of course, they left… but why be there in the first place?

So the Russian troops were probably being told to get bit by radioactive spiders until someone develops superpowers. So far it looks like all they’ve got was sick, but at least one guy is starting to swell up and probably die… just like his mother always said he would if he wasn’t careful. Listen to your mamas and go home, guys.