Getting to Know Your Regulations 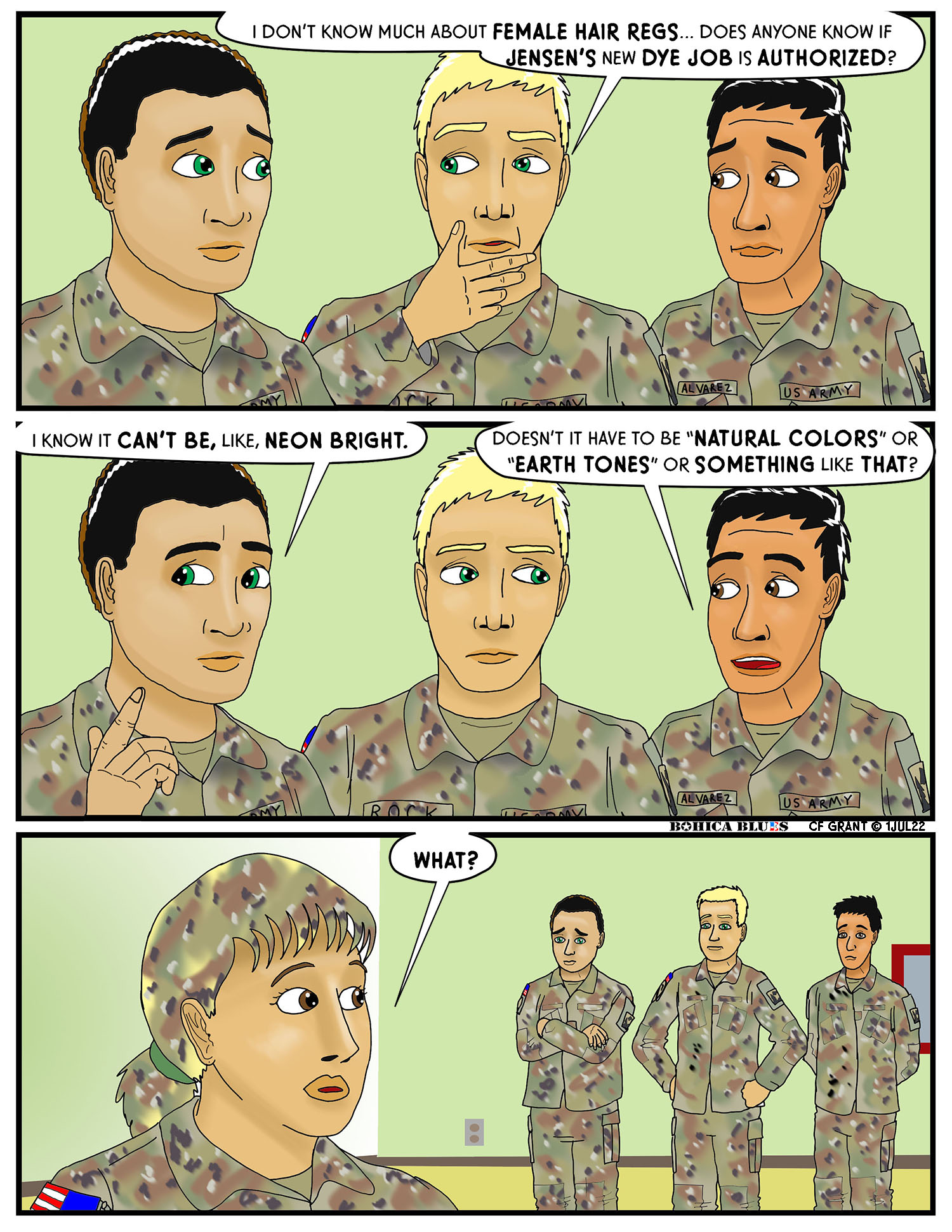 Getting to Know Your Regulations

Hair policy has changed a lot lately. It has changed for males and females, but the changes for males are pretty negligible and not as widely noticed. Female hair regs have undergone a lot of changes recently, and the changes tend to be more obvious.

It used to be that females had to wear their hair in a bun at the back of their head, and that bun had to not interfere with the wearing of either their hat or helmet. They could wear ponytails for physical training (either organized, group training or working out as individuals) but had to be back in a bun by the time they resumed daily duty uniform. Hair couldn’t touch the ears, too, as I recall.

Nowadays, females can wear their hair in ponytails or braids during duty hours, although there is a length limit (mid shoulder-blade area, I think) and it can go over the ears. It may have to go back into a bun for field duty, too.
Coloring your hair is one of those changes that seems to have a bit of wiggle room these days, but not as much as female hair length and style. This is one of those areas that can affect male soldiers as well, since males are allowed to dye their hair if they want. Traditionally, men coloring their hair was pretty rare and it was usually older guys that might apply something to reduce the amount of grey hair they had.

But for younger generations, male hair coloring has become a bit more common. For the military, the rules apply to males and females, but because of years of traditional inertia, the results are typically more noticeable on females. Hair coloring must reflect “natural colors”, so a blonde could become a brunette or redhead, or other similar conversions, but no one can have “non-natural” hair colors like teal, orange, blue, etc.

The one color I always wondered about was green. What if someone got green hair, like, a nice Army-color olive green? You can’t say it isn’t “tactical”; heck it’s more tactical than a natural-colored redhead or even blonde, and no one forces them to color their hair.

And to take that a step further, what if someone found a way to do multiple colors that resulted in camouflage? If anything, that would be better than any natural hair color, regardless.

Anyhow, I’m one of those older guys who now finds himself working with more females in the Army these days. The ones I know are great troops and hard workers, but I admit I have no idea what some of the uniform regs are that I am supposed to be enforcing. One of my female troops could show up with camouflaged hair and, as far as I’m concerned, she deserves an Achievement Medal.