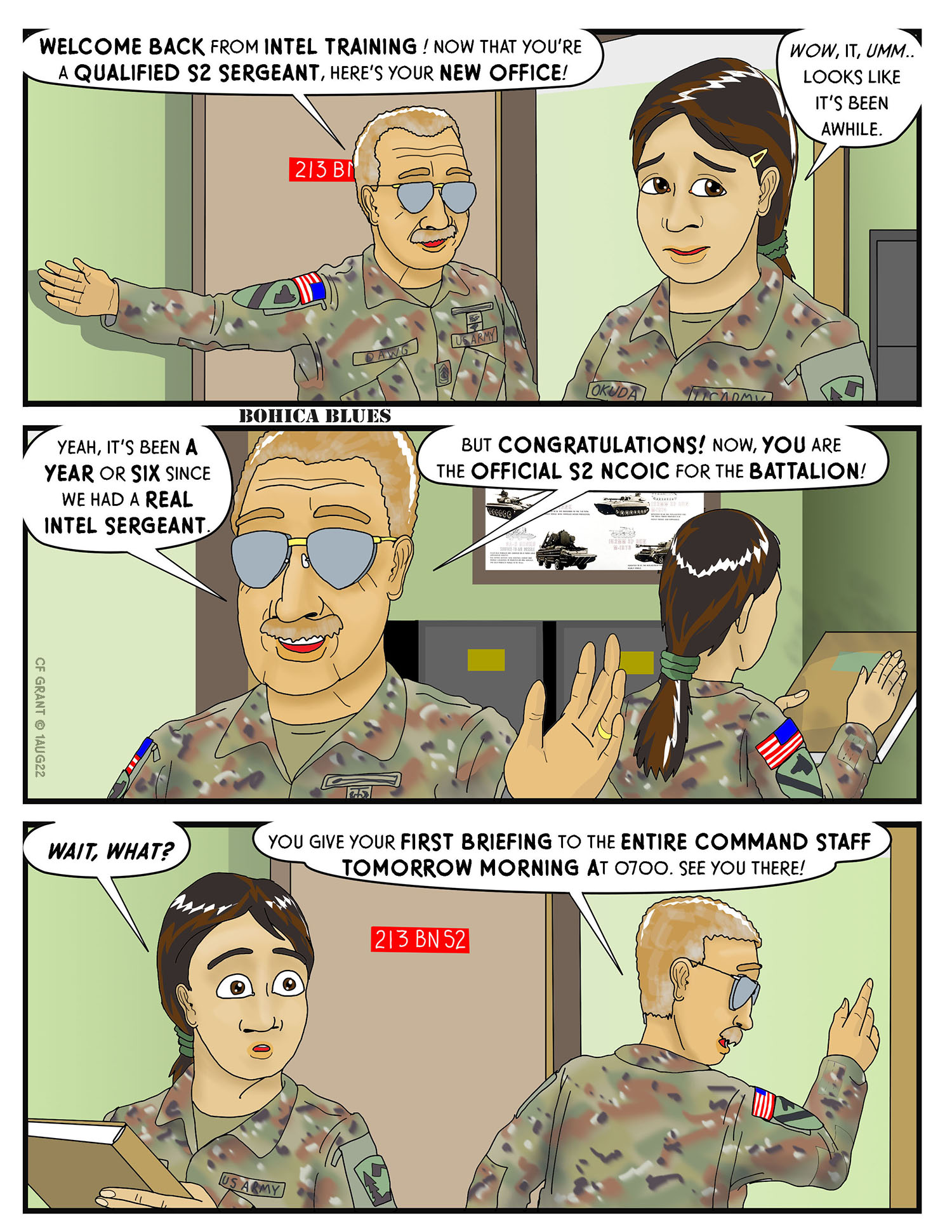 Ever just show up and suddenly find out you’re in charge?

(What about S-5? It usually doesn’t exist, unless you need a military/civilian liaison office in a foreign host country).
Juni went to Intelligence school and changed her job; she is now an Intelligence, or “S2” sergeant. And upon returning to Boise and going back to weekend drill with the rest of the 213th Battalion, she finds out that she is the “NCO-IC”, or “NCO (non-commissioned officer) In Charge”.

In some Reserve and Guard units, there may not be enough Staff personnel to go around. Some positions may go unfilled, and S2 is one of them that may be left abandoned if there just aren’t enough people interested in joining a local Reserve or Guard unit to fulfill the position. Some Staff positions are absolutely necessary, like S1 and S3 (personnel & operations, respectively) because frankly, without those positions, no one gets orders, nothing gets organized, and most importantly, no one gets paid.

S2, on the other hand, can be left vacant if you are critically short on people. It really means that the S3 people have to pick up most of the slack, with the other S-shops helping out as needed. But a lot of units feel that a functioning S2 shop isn’t critical until you have to deploy somewhere.

Juni has come back to find that the Intelligence/S2 shop has been left in a state of neglect. While it is true that the 213th Battalion was on deployments to Iraq, their last S2 Sergeant was a “fill” from another unit who went home after the deployment was done. So now she is it, even though an S2 NCOIC is typically supposed to be a rank higher than she is, or Staff-Sergeant (Juni is a freshly promoted regular Sergeant).

She has no real experience at even being an NCO, much less taking charge of a Staff section by herself. But she’s the only one with any qualifications, so she goes out of the frying pan and into the fire.

Does this happen a lot in the Army? With Active Duty, sometimes, but not *usually* this extreme (don’t count anything out, though). Reserves and Guard? You can pretty much bank on at least one sudden whiplash event of “on the job training” at some point.