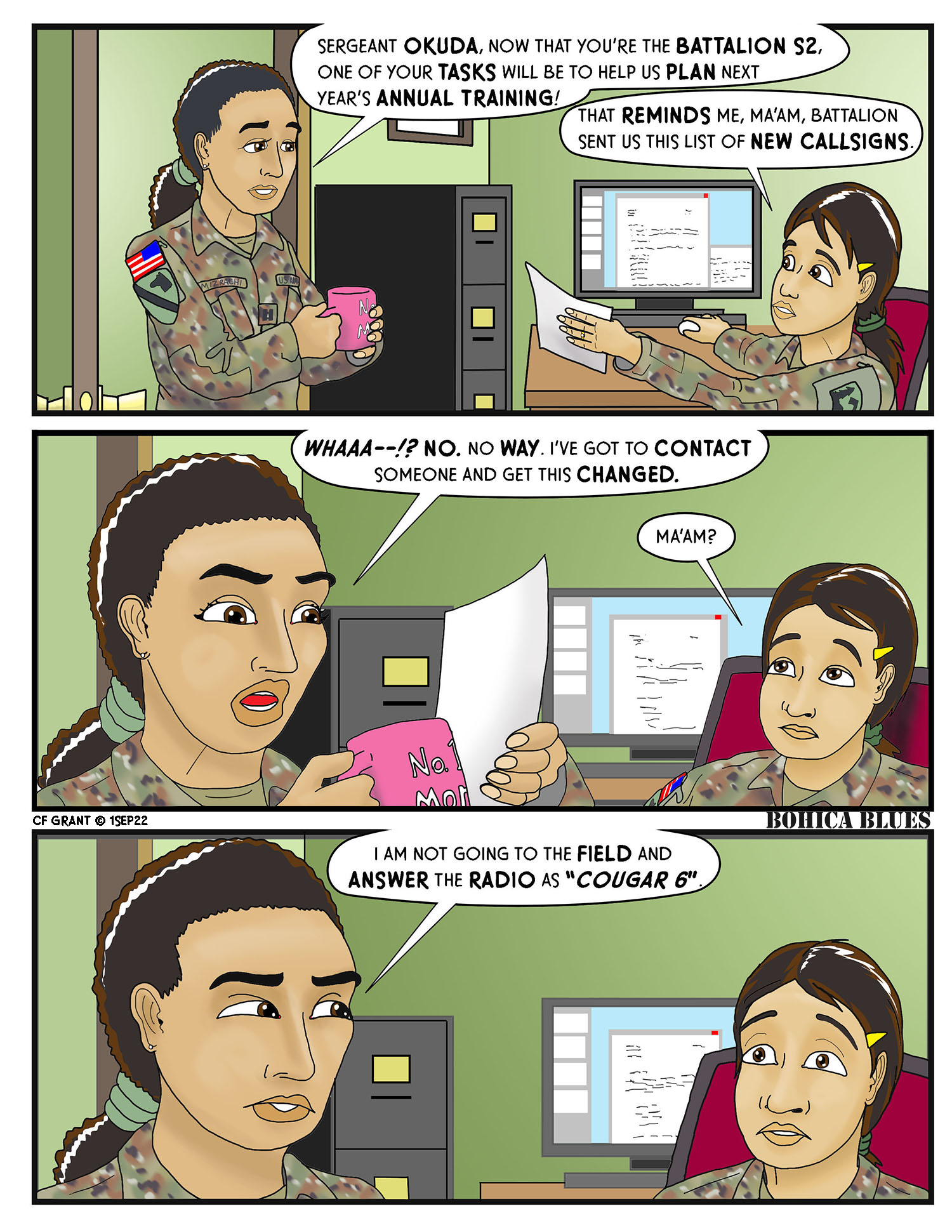 This actually happened to a female commander I served with once. She was a Company Commander, a Captain, and of course she never told us how old she was but she did mention at one point having a son who had just joined the Marines, so making some logical assumptions she was at least in her late 30’s or early 40’s… and yeah, she’d weathered the years fairly well. And so one day we got a list of new radio call signs, and we were to be callsign “Cougar”, making her “Cougar 6”, which absolutely mortified her.

For those unfamiliar with callsigns in the military context, typically a Company (generally around 100 soldiers, give or take depending on mission) will have its own callsign for use on the radio. Soldiers do not have their own individual callsigns, like you sometimes hear in Hollywood movies (Airplane pilots are an exception), and Company Commander rarely have the ability to create their own.

It might be that a Battalion, Brigade, or maybe a Division commander will express a desire for a certain callsign “theme”, like in this case it may be predatory animals in general, or big cats in particular. So a Brigade Commander may decide to do “predatory animals” as a theme, and so across the Brigade you’ll get “Tiger company” and “Timberwolf company” and “Grizzly company” and so on.

For sure some of this is just indulgent fun on the Brigade commander’s part, but it also makes sense– listing to multiple radios, you know that any mention of a predatory animal callsign is radio traffic about your own troops, while callsigns about other things (“Phantom company”, “Reaper company”, “Blackjack company”, etc) is about a neighboring Brigade.

“Cougar 5” would be the second-in-command officer, or “X.O”, the “Executive Officer”, making the overall commander “Cougar 6”. The company 1st Sergeant would be “Cougar 7”.

What about other soldiers in the company, don’t they get callsigns? Technically, yes, they do, but it is rare for the Army to break the levels of communication down that far. The radio operator for 1st Platoon leader would be “Cougar 1 Romeo” because “Romeo” is the phonetic representation of the letter “R”, which indicates “Radio”. The 1st Platoon leader’s vehicle driver would be called “Cougar 1 Delta” because “Delta” is “D” in the alphabet, and “D” is for “Driver”.

You can see how this would become complicated very quickly for all soldiers successively down the line. So while each soldier does technically have a callsign, for the most part it goes unused and not even realized by most average private troops, since they’d likely never have to use it and it would be incredibly cumbersome.

As for what makes a lady a “cougar”? It’s a social construct that may vary by one’s own perceptions, but I think that a woman in a romantic relationship with a man in which she is at least 10 years or more senior to him is technically “cougar” territory. Individual mileage may vary.