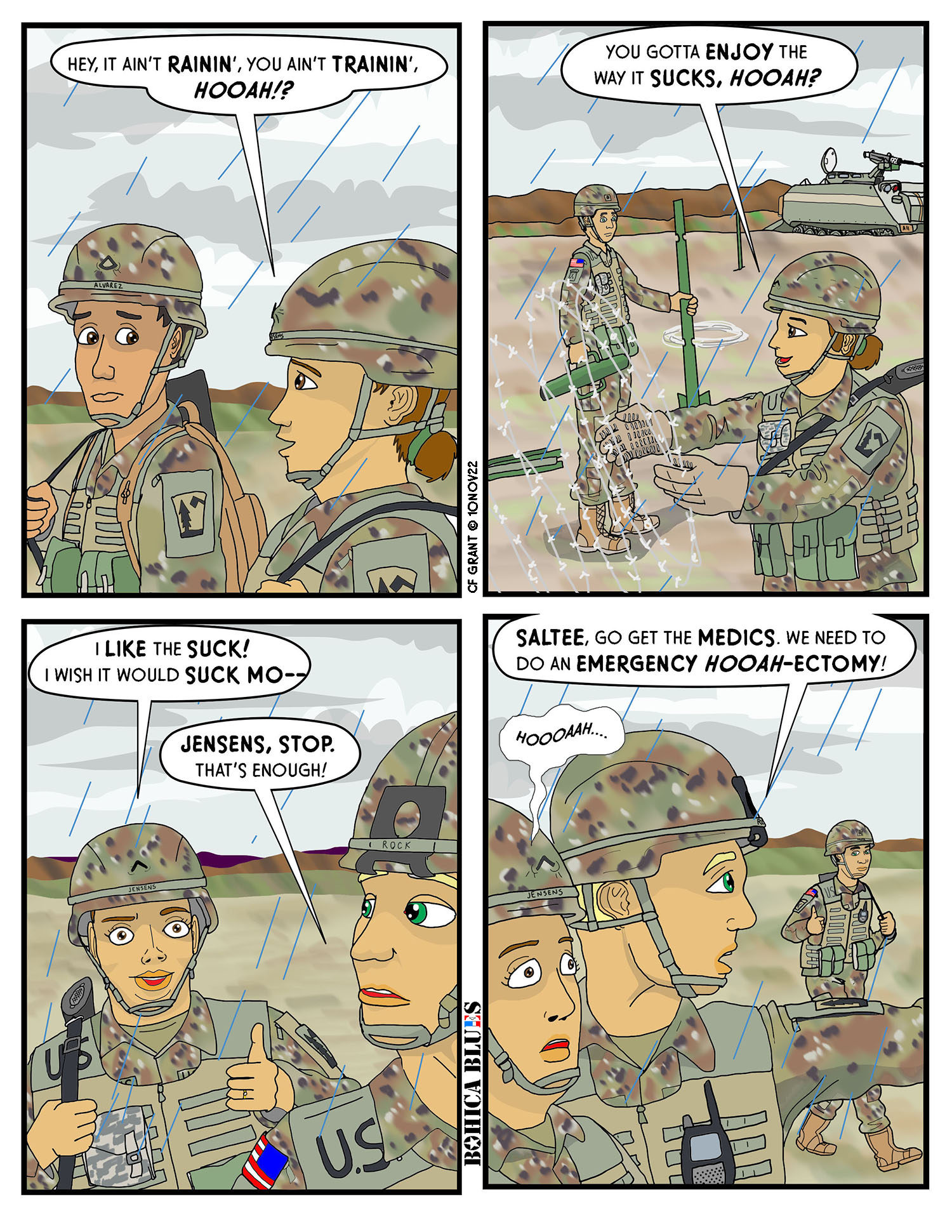 I don’t use the term much in the comic, but “Hooah” is a sort of universal shout, cheer, grunt, or expression of dismay common in the Army. The Marines have one like it, “Ooh-rah”. I think the Navy uses “Ooh-rah””, too.

The Air Force? I think they say “Like, Ohmigawd!”

No one really knows where the term “Hooah” came from; there are many different stories. But it can really mean pretty much anything, from “I agree with you” or “I am excited about what we’re doing!” to “Uh, sure, whatever” or even “I don’t understand a word you just said but I really don’t have the time to get into it now”. It is *supposed* to be a term of general motivation, and that’s what they try (or at least *tried*) to instill in you during Basic Training. A Drill Sergeant would demand to know if you were motivated for some training that was about to suck, and you’d try to respond with a deep, guttural scream of HOOOOAAAHHH! to satisfy him or her so they would go away and leave you alone.

Later, people who are too deeply steeped in the Army’s tea tend to use the term as a punctuation mark as they show off how tough and hard-core (and kinda brainwashed) they are. Such is the case with Jensens, who has only been out of Basic Training a few months and still wants to show off how highly motivated she is, with her puppy-like “young soldier energy”.
The gloves Jensens is using in the second panel are real things; they are super-thick leather gloves lined with little metal “staples” in the palms and fingers, and they are for handling a type of barbed wire called “concertina” wire. Concertina wire is much meaner and nastier than normal barbed wire you might find surrounding a cow pasture. It is also the hoops of wire she is holding in the picture.

Concertina wire is a quick way to mark off a boundary area. Ordinary metal fence posts are jammed into the ground, and concertina wire is “bounced out” and affixed to the poles to keep out casual access by the uninvited. It is hard to get around and there’s no easy way to grab a portion of it and fold it down to step over; it doesn’t work like that. And it is tightly sprung, so if you snip it with wire cutters the two cut ends slice outwards, making it even more dangerous.

Obviously it does nothing to keep out bullets, but for that we have things like sandbags or Hesco barriers, which are kinda like giant sandbags in a way. Setting up concertina wire is a very common Engineer task when we go out to the field, and while not enviable it is probably better than digging foxholes or trenches.