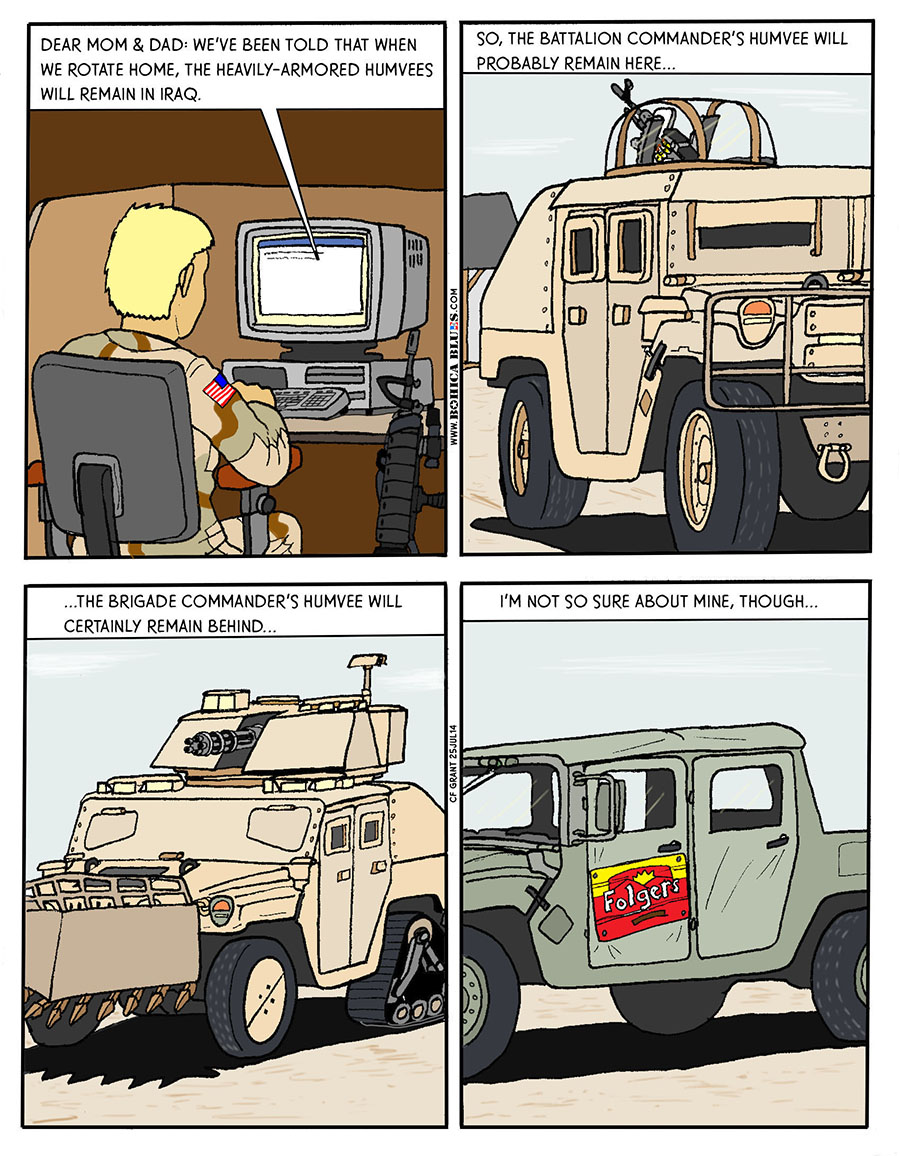 25 JUL:
Instead of Star Wars jokes, I’ll harp on the armor issue instead.

We actually were informed that the Humvees that had “proper” armor kits installed would remain in-country for the next rotation to use. Naturally, these were the up-armor kits that had been supplied to the high-up officers. In other words, the people that generally did not go outside the wire and perform escort missions, or neighborhood patrols, or other dangerous tasks. No, most of them stayed in the camp, in air-conditioned T.O.Cs (Tactical Operations Centers) and went outside on rare occasions. Those of us that ran missions mostly had to make do with the slabs of scrap metal armor, plywood and sandbags (the ones that wore out our tires and strained the suspension so much).

While I am over-exaggerating the disparity in armor displayed here in the comic, the feeling that the troops had to make do with “whatever” was hard to escape. The truth is, there weren’t very many armor kits to go around, so the officers got them, instead of forcing people to select which soldiers on patrol got the “good” armor, and which soldiers on patrol had to do with the “hillbilly” stuff. The fault for this, as far as I am concerned, lay with the topmost political decision makers, who did not fully prepare for the war or bother to equip their troops, even though plans to do “something” in Iraq had been circulating for a long time.

In the long run, the armor situation prompted the development of the MRAP vehicle class: Mine-Resistant/Ambush Protected vehicles with high center-of-gravity and V-shaped hulls. The MRAPs got developed and fielded in about a year, so had they chosen to act quickly to get us proper vehicles, they could have– and they probably could have gotten more “proper” kits to us even faster.

Comment added 26 JULY (reply to revcoyote comment)
Yeah, the armor thing had a lot of us kind of annoyed at the time. This comic is actually a re-do of one of the original comics I did at Camp Victory and posted in the chow hall, and a lot of guys I knew liked it. The homemade armor may have even been more dangerous than none at all, since we theorized that it would not have stopped a bullet but would have just deformed it so it made a worse wound upon entry. Luckily, we never got a chance to test the theory.

So far about 80% or so of the comics I’ve posted are correlated to some of the original ballpoint pen comics I did back in 2004-05. They touched on issues and feelings we had at the time, so even if some of them are a bit dated, I reproduce them more or less faithfully to replicate where our minds were as we experienced it.

Comment added later, again in reply:
It’s my over-the-top version of how well-armored the Humvees got the higher up the food chain you go. My company commander had a pretty regular armor kit, the BC had one that seemed to have a few extra plates on it that I couldn’t figure out (didn’t get close), so I just extrapolated that it got more extreme from there. So the Brigade Commander also gets the micro-Bradley turret with minigun, while the Battalion Commander has to content himself with the B-17 Plexiglass turret.

General Sanchez probably had a gloss-black Bradley with rim spinners on the bogies.

Actually, the tracks on the back of the Brigade Humvee are taken from a real conversion kit, but it’s for Humvees to drive in the snow. If you saw the movie “Inception”, a Humvee with four tracks is featured in the end. You probably could not combine tracks and wheels to make a halftrack, but since I dig halftracks I had to fudge the rules a bit.