Back On The Clock 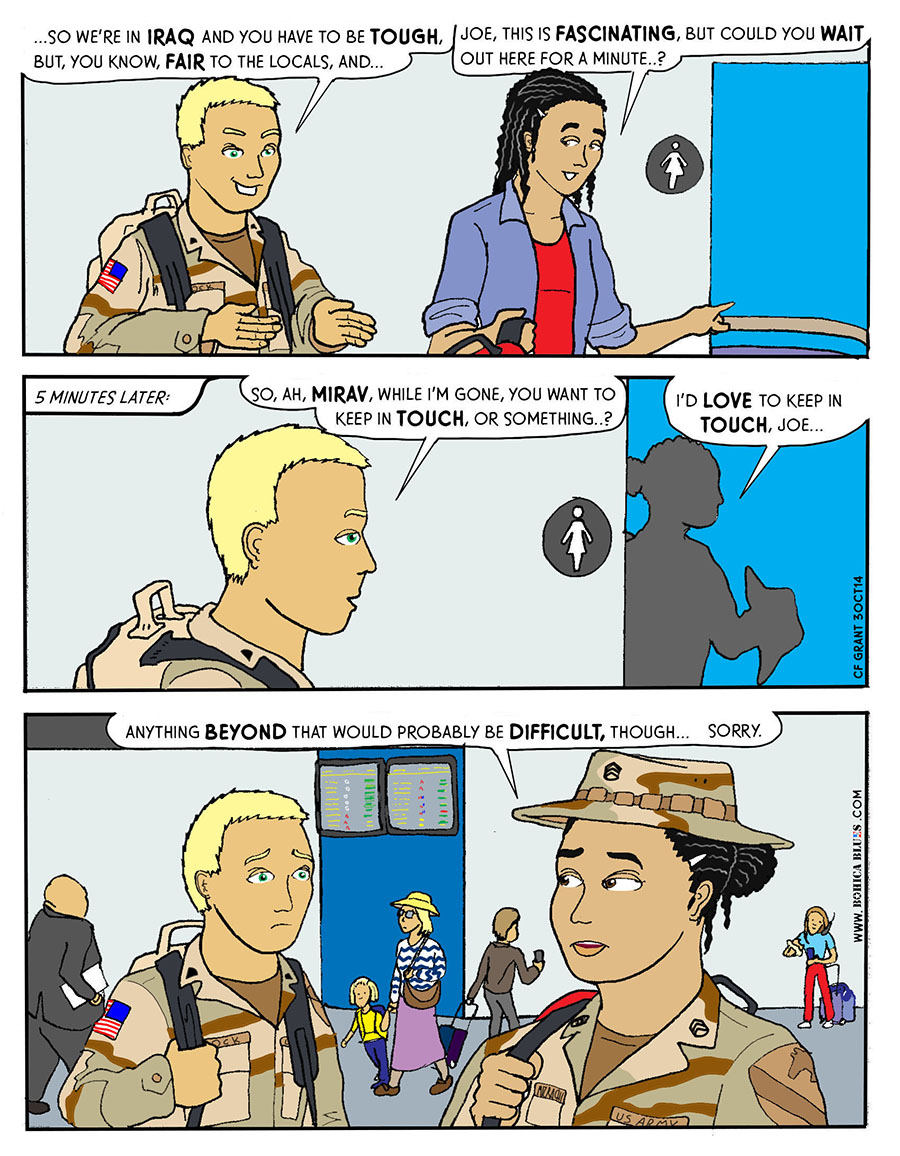 Back On The Clock

3 OCT:
Alas, poor Joe. For what it’s worth, Mirav realizes that was a bit of a jerk move on her part. She’s impulsive and didn’t think it through beyond that last bit of fun before her leave ended as well.

Anyhow, as for relationships in the military: there are three “levels” of rank in the military: Enlisted, Non-Commissioned Officers (NCO) and Officers. For the most part, relationships that form among members within those rank groups are okay, so long as no one is involved in a relationship with someone who is directly in charge of them. Joe is a Specialist, the highest rank someone can be in the Enlisted series. Mirav is a Staff-Sergeant, which is after Corporal and Sergeant, so she’s a couple rungs in the ladder up into the NCO series. So in other words, any relationship between them would be forbidden, because it would automatically be assumed that she used her rank to coerce Joe… and both of them would be forbidden to get into relationships with Officers. Everyone needs to stay within their rank groups.

Of course, Joe could get promoted, and since that would make him an NCO as well, things would technically be okay… unless she was put directly in charge of him. Then, the typical choice is “break up or get married”– which seems like an odd way to get around the rules, but it’s been known to happen.

A lot depends on the commanding officer of the unit they are in. Some commanding officers are very open-minded and –as long as they remain professional and don’t let their feelings interfere with their work– would look the other way. Some are real sticklers for the rules, and would enforce the “break or marry” edict.

Of course, for Joe and Mirav the point would be moot– even if Joe got promoted, they would not be allowed to carry on a relationship while deployed to a war zone. They’d have to wait until they rotated home, or face being transferred to different units away from each other or possibly even disciplinary action (again, that’s if the commander wanted to be a real hard-ass).

This is the end of the “On Leave” chapter, and Joe will be back to his unit, the 21th Battalion. We will see Mirav Mizrachi again, too.