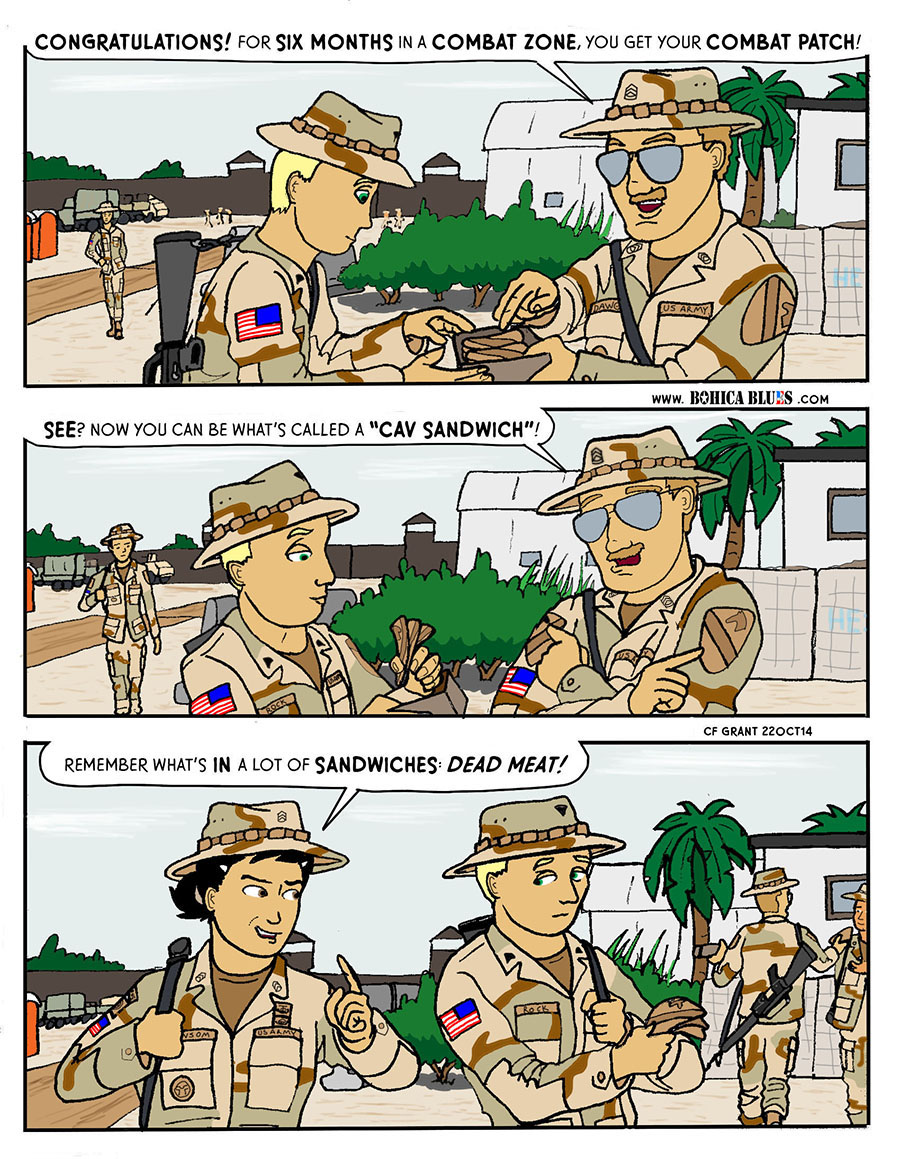 22 OCT:
So, after learning about combat patches, it is finally time for the 213th to get theirs. Remember, you don’t have to accomplish a special feat to be awarded a combat patch, you just have to serve at least 6 months in a designated combat zone where you face risk just by being there. So while it is not like a medal, it still has a coveted status within the Army culture– it proves that you were able to tough it out for at least six months, and is a physical recognition of the time you’ve spent away from friends & family, enduring hardship. The 1st Cavalry shoulder patch is fairly large compared to other Divisions’ shoulder patches, sometimes likened to being the size of a slice of bread, so when you wore one on both shoulders you were a “Cav Sandwich”. SSG Ransom, fresh from her story with SPC Two-Feathers, is in a bit of a mood after drudging up her memories, so she can’t resist a cynical observation about the “sandwich” imagery.

Now, the typical combat tour for a deployed Army soldier was a year, so getting awarded the combat patch is also the half-way mark– every minute you spent deployed from that point on was a minute closer to going home, and you now had less time to spend than you had already endured. Deployments for Marines are were about 7 months at the time, Navy personnel deployed to the area were about the same, and Air Force was, I believe, 3 to 4 months. Over the course of the Iraq War, it was possible for an Air Force crewman to serve several tours to a Soldier’s one or two tours.

While I’m not sure about Air Force, the Navy and Marines don’t have the “combat patch” tradition. In fact, the Marines don’t wear shoulder patches displaying their Division affiliation at all. The Marine Corps is much smaller than the Army, and the Army has so many Divisions and stand-alone Brigades that unit identification becomes a feature of the service. A lot of the Army’s shoulder patches are designed to resemble heraldic devices such as shields and coats-of-arms from Napoleonic and Medieval times. Napoleon once said something along the lines of how astonishing it was that a man would risk his life for the privilege of being able to wear a specific piece of colored ribbon on his uniform… and that with enough colored ribbon, he could conquer the world.

Of course, that didn’t work out quite as Napoleon had envisioned, but the status of the combat patch in Army society reveals that there may be a grain of truth to it.