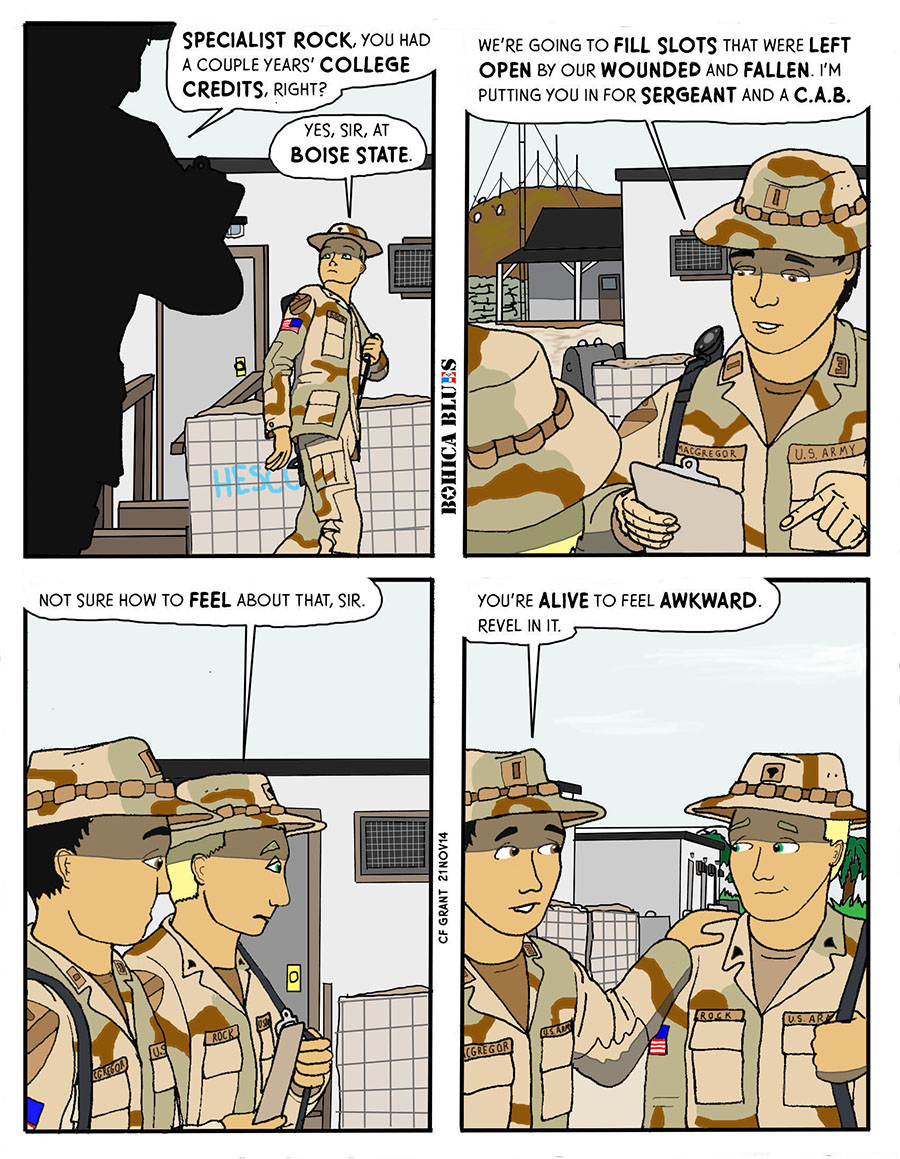 21 NOV:
Since Staff-Sergeant Purdue get wounded, Sergeant Jamal Kajama takes over the squad. That means he’ll need someone to be a team leader, and that job will fall to the person who is most qualified. Joe feels uncomfortable getting a promotion because of another person’s misfortune, but he should remember that in the military, people of senior rank leave all the time– some due to wounds (or death) in combat but more frequently they retire, or move on to other positions. It was inevitable that Joe would have gotten promoted one way or another, and SSG Purdue served knowing the risks– so Joe shouldn’t dwell on it. Lieutenant MacGregor reminds him to count his blessings– and of course the fact that Joe feels uncertainty (rather than Schadenfreude) is probably a point in his favor.

So Joe Rock will be reviewed as “most qualified” for promotion. In the Army, “most qualified” is determined by a series of promotion points that are tallied up by various things in their personnel records folder. That can include many things– not just time and experience in the Army (called “Time in Service”) but also how long you’ve been serving in your current rank (“Time in Grade”). It will include how many Army schools or academies you’ve attended (anything from various leadership academies to things like Airborne or Ranger school), any awards you’ve been given (medals, service or accomplishment ribbons, and so on), combat service, and so forth. Obviously, if a soldier has received any negative events in his or her records folder, then counts against– anything from a counseling statement for poor performance up to a non-judicial punishment for something really serious, like a drunk driving conviction or petty theft. A typical “non-judicial punishment” in the Army is called an “Article-15? and some of them can seriously set back a career or even cause a reduction in rank.

One thing I always thought was a bit strange was that the Army (I suppose all branches of service) also puts a lot of weight on civilian education. If you’ve had some college education, even if you have not yet completed it, it adds points. It is one of those situations where it doesn’t matter what you study or if it is even remotely related to your job field; the ability to wake up on a regular schedule, take some notes while hung over, and pass a test counts for something in promotions. If you are a tank crewman, you can have a degree in Botany –the study of plants– and earn a promotion for it.

I’m not going to complain about it too much; I myself have benefited from this policy, earning a rank partially from time in service & grade but also with civilian education putting me over the top. But even though I have benefited I still wonder if there should be a sliding scale placed on the relevance of a degree to the job… but then, that probably opens up a whole ‘nother can of social-political worms.